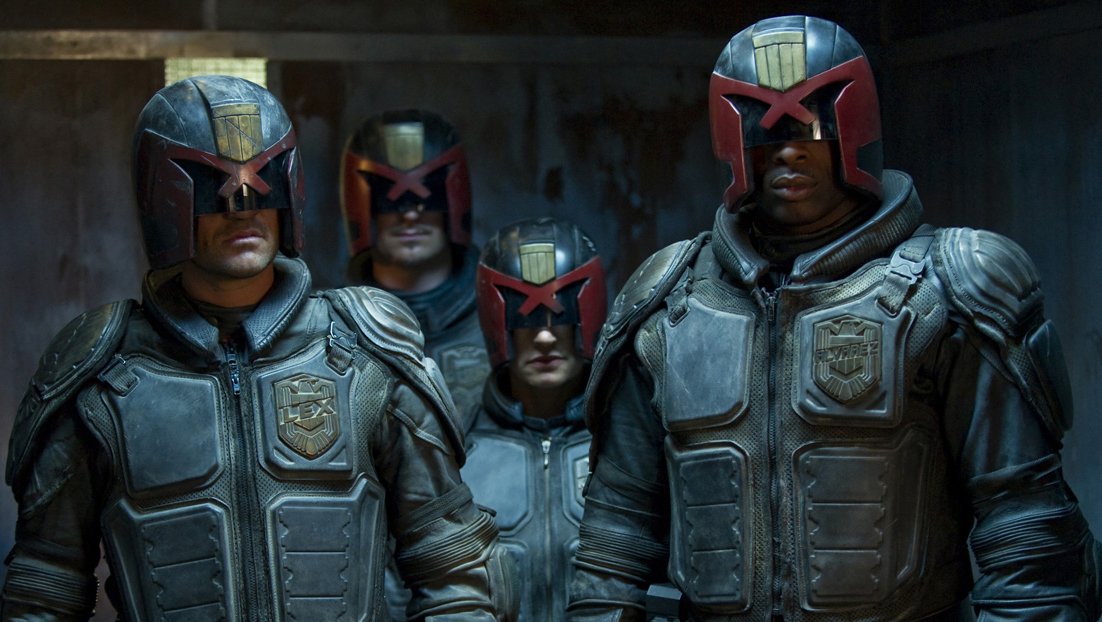 Bystanders are huddled together under the steady drizzle of rain; the only sign of life is their breath fogging in front of their face. As your vehicle descends past the neon lights down to the slick street, you double check your objectives: get in, save the hostages, confiscate the credits, and most importantly, execute all the guilty.

You are a police officer of the JYDGE program, the literal incarnation of the old saying, “Judge, Jury, and Executioner”. Your helmet looks like a judge’s wig and your gun is called Gavel Mk. I and it spits out a steady stream of justice.

Before the guilty even have time to blink, you’ve walked through the wall like it was no thicker than tissue paper and have dispensed the law into their chest at a rate of 10-bullets-per-second. You tell the hostage to get out – they don’t have to be told twice.

Each room is cleared quickly, and when the dust settles and all you can hear is the thumping ‘80s soundtrack, you return to your squad car and rise back up to the sky – leaving behind the guilty and a trail of destruction. Justice has been served.

This is one of many ways you can approach 10Tons’ Xbox One indie title, JYDGE. Through an expansive perk, ability, and gun upgrade system, how you tackle every level will evolve over time, and become more in-tune to your overall gameplay style.

JYDGE plays like a top-down twin-stick shooter in the same vein as Hotline Miami, but without the intense difficulty, and like Geometry Wars, without the waves and waves of enemies. Objectives are setup before the beginning of each mission, but these boil down to rescue the hostages, defeat the boss, and/or clear out all the enemies.

The challenge comes from figuring out where everything is located in each level. You will spend most of the time on your first attempt mapping out the level and finishing the main objective, while on secondary attempts, you’ll be focusing on clearing the auxiliary goals.

It’s these side-goals that are most important, as completing a goal rewards medals that are used to unlock the following levels as well as abilities. As the game progresses, you will need to effectively “ace” all the levels in order for the late-game gear and stages to be unlocked. It’s a tried-and-true system that works, forcing you to replay levels in order to perfect them and unlock more content.

Medal challenges range from easy to insanely difficult. Finding and confiscating all the money crates is something you’ll want to do regardless of whether it relates to earning a medal, as money is required to purchase new perks and abilities. Compare this to a goal that requires you to clear a level in under 20-seconds, an extremely difficult task, and only being attempted because you want those last few medals.

All of this is set to a thumping ‘80s-style synthwave soundtrack while all the visuals are a throwback to that particular point in time: enemies are a bit punkish, neon lights illuminate the area, your vehicle looks like a DeLorean DMC-12. Even the story takes inspiration from the likes of Robocop and Judge Dredd – your character is part of a new wave of police designed to make Edenberg the sanctuary it was always meant to be.

JYDGE also offers a “CO-JYDGE” mode where you can take to the streets with your friend. These local co-op modes are always well-received, as it extends the lifetime of a game – everyone loves a good couch co-op.

While JYDGE doesn’t push any boundaries, it’s a solid indie game worth picking up if you’re looking for a Hotline Miami-like game for your Xbox One. As someone who loves the ‘80s aesthetic and twin-stick shooters, this is a great title, especially if you enjoy a bit of couch co-op.