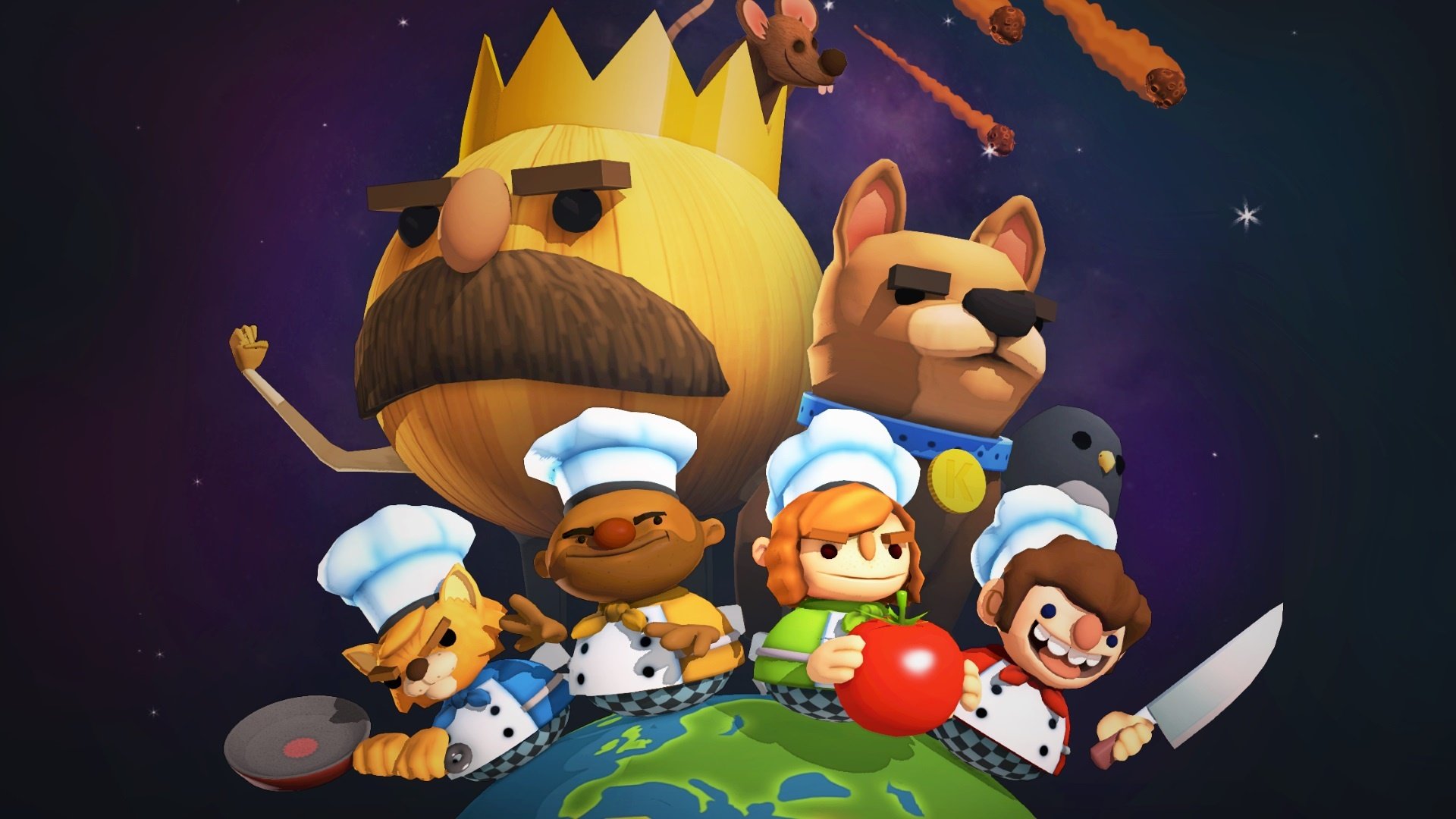 In this age of online gaming, the humble couch co-op is often overlooked. If you grew up before the days of Xbox Live, you’ll fondly remember countless hours spent on titles like Timesplitters, or countless arguments over the mortal sin that is screen watching. Gaming together in the same room offers a social experience that online gaming just can’t quite replicate.

Fortunately, as mainstream attention moves further online, independent studios have begun to fill the gap with excellent co-operative experiences. We’d like to raise a glass for those developers who continue to bear the standard of couch co-op by collecting the finest couch co-op games available right now. So grab some food and friends before cracking these out to settle down for an evening of fun.

Overcooked may be one of the greatest co-op games ever conceived. As a team of chefs, you’ve got to fill orders in a limited time by completing a range of simple tasks like chopping veg, boiling soup and washing dishes. What makes Overcooked so special is that you never quite have enough people to handle the tasks at hand, requiring you to hop back and forth with constant communication. Levels start fairly benign but ramp up the difficulty quickly as you serve food on a rocking pirate ship, a haunted house and even in a shifting space station. Inevitably, everything goes horribly wrong and before long the soup is on fire, there’s lettuce all over the floor and your cat chef keeps falling off the map with finished dishes. It’s nothing short of perfection.

Madly successful indie-hit Rocket League is best known as a highly competitive game to test your rocket-car handling skills online, but it also makes for a fantastic couch co-op game. Playing against AI in the same room is an absolute blast, adding a great deal of fun to an already ridiculous title. You can even take your team online in split-screen co-op, but be warned you might be playing at a serious disadvantage in terms of vision unless you’re rocking a particularly large TV. If you get bored of regular rocket footy you can even play basketball, ice hockey and more in the ludicrous modes Psyonix have added.

Have you ever wanted to live out the fantasy of every single 80s action hero at once? Well now you can with Broforce. Somehow avoiding lawsuits from all angles, Broforce lets you take control of an armada of beefy heros and heroines to take out Bad DudesTM as you liberate the world in funky pixel graphics. The gameplay is utterly hectic and inevitably leads to an entertainingly complex chain of explosions killing most of your group, but so long as someone makes it to the chopper at the end, nothing else really matters. Broforce will have you racing your friends to unlock the next bro and find out who’s joining the likes of Bronan the Brobarian, Rambro and Ellen Ripbro

Offering the very rare experience of two-player splitscreen RPG, the Enhanced Edition of Divinity: Original Sin shows Larian’s technical capabilities in transferring the full PC experience to console. With witty writing and a huge campaign to follow you’ll be engrossed for hours. The main story involves the usual schtick of saving the universe, but mostly you’ll spend your days solving important missions such as setting two housecats up on a date or settling disputes through rock-paper-scissors. The turn-based combat can prove a surprising challenge, but rewards measured and tactical play. Its superb sequel has just dropped on PC, and while we eagerly await a console release, the original holds more than enough content to keep us busy in the meantime.

I sure hope you like killing your friends. What’s that I hear you cry? this is supposed to be a coop list? Helldivers is certainly a cooperative game, but that won’t stop you ending your partner’s life more than a few times. A top-down, twin-stick shooter, Helldivers drops you and a buddy down onto a hostile alien world filled with bugs, robots or other weird things. The objectives to complete are simple enough, but surviving the hordes of enemies certainly isn’t, especially when your own team is the deadliest thing around. Helldivers’ novel move is the ability to call down turrets, artillery fire, special weapons and more from orbit, requiring tricky button sequences you will inevitably mess up under pressure. The best part? Friendly fire is on and brutal, so that helpful turret you placed may well end up gunning down your friend if they’re caught between it and the enemy. Everything in Helldivers is so cruelly lethal that even the rescue dropship has a habit of crushing anyone it lands on.

Resident Evil 5 is ridiculous. It’s often marked as the defining point at which the series went downhill, but it remains one of the finest co-operative campaigns out there. By no means is the title a horror game, but as it turns out, it really doesn’t have to be. Fantastic, punchy weapons, ludicrous boss fights and a boat-full of upgrades and treasures to secure make for a truly entertaining romp. Kick back and enjoy the superbly terrible B-movie plot as you gun your way through villages, temples and secret bunkers with Chris and Sheva. The mercenaries mode is a brilliant addition that’ll keep you and a partner busy for some time after the campaign’s over. Plus, we’ve got a whole lot of love for a game in which a man punches a boulder into submission.

A launch title for Nintendo’s new console, Snipperclips is a delightfully animated 2D co-op puzzler. Players take the form of two rotatable shapes which must cut each other into new forms to solve puzzles. These tasks can involve anything from dunking a basketball to forming a hook and a sharp tip to catch and pop balloons. You can be as inventive as you like with solutions, and playing around with different shapes is a real blast. Brought to life through flashy colors and your character’s emotive faces, you’ll be giggling just moving across the screen. Best of all? There’s a demo available on the Switch store right now, so hop in with a buddy and get snipping.

Look, the WiiU needs some love, too. It wasn’t a perfect console but Nintendo released some top-notch titles to play with your mates, and Super Mario 3D World might just be the best of them all.  Just as we’d begun to get sick of the endless 2D New Super Mario variants, Nintendo released this delightful 3D co-op adventure which did a stellar job of transitioning New Super Mario’s 2D coop hijinks to 3D. In fact, 3D World outdoes New Super Mario Bros. and the 3DS' Super Mario 3D Land in almost every way, offering far more innovations to the Mario format. Plus, who doesn’t want to dress the Mario cast up in adorable cat onesies? You may have already played it through, but jumping back in with three mates is still a blast. In no time at all you’ll be back to wrestling each other for that first-place crown.

Keep Talking and Nobody Explodes (PS4)

Okay, we might be stretching the concept of couch co-op a bit far with this game as one player isn’t allowed to watch the screen, but when it’s this fun, who’s can really judging? In a genius work of asymmetric design, Keep Talking and Nobody Explodes sets your team to the task of bomb-defusal — the catch being that only one player can see the bomb. Presented with a deadly briefcase riddled with puzzles, they must relay information to the rest of the team as requested. The remaining players must then hunt through pages and pages of a bomb defusal manual (this works best if you print it out) to find the solution to each module and stop the countdown. The game’s clever design creates some fantastic moments as one player panics in their haste to describe bizarre symbols or relay crucial information on the color and orientation of wires. Even better, if you’ve got the tech for it, a PSVR version is included, really ramping up the tension for the lone defuser.

Lovers in a Dangerous Spacetime (PS4/Xbox One, Switch - Oct 3)

Despite it’s adorable looks, Lovers in a Dangerous Spacetime may strain your friendship (or relationship) to its limits. Guiding a spaceship through and around dangerous obstacles while fending off alien beasties, one to four players team up to control different aspects of the ship. In order to manage every function, you’ll need to run around within the ship itself, jumping between different controls for the guns, shields and engines. It’s an undeniably stressful experience, but much like Overcooked (see above), feels fantastic when your team really comes together. A vibrant art style seals the deal on this critically acclaimed coop indie hit. Nintendo Switch owners are finally getting to join in the fun when the game hits the eShop, October 3rd.

Since the first title released on Xbox 360, Geometry Wars has repeatedly demonstrated its calibre as a score-busting, twin-stick shooter. The third title in the series adds a whole bunch of weird shapes and sizes to play on, a shift that didn’t quite sit with many of its fans. Fortunately, the game also adds a one to four player coop mode. These specialized levels tone down the weird arenas but up the ante in terms of sheer chaos. You’ll get the chance to develop new strategies with your partners to perfect each level through repetition after repetition as you shoot for those high scores.

If Geometry Wars didn’t scratch that twin-stick itch enough, try your hand at Assault Android Cactus. Playing as one of nine android heroines, you can team up with 3 buddies in a truly arcade experience. With a frenetic pace, AAC really emphasises movement as you fly round the stage dodging bombs, lasers and robots. Twin-stick shooters can often seem a daunting prospect to newbies, but even the inexperienced will be able to have a blast here as they burn through the campaign. There’s no much of a story to go by, but you’ll be so focussed on beating your previous score that you probably won’t mind at all.