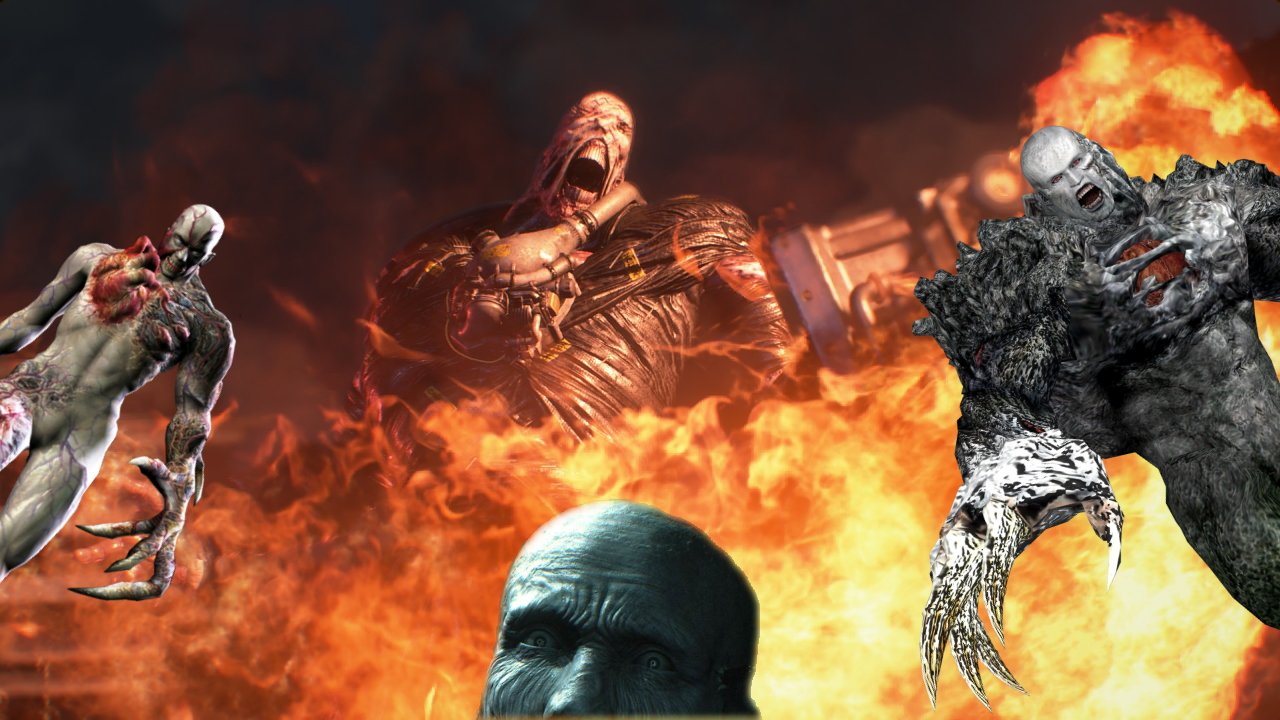 Resident Evil 3 releases tomorrow, and brings the return of one of the series’ most iconic villains. The relentless pursuer, Nemesis hunts Jill through the streets of a ravaged city, turning up at the worst possible times to send fear down your spine and his fist through your face. In honor of the most mighty of Tyrants, we’ve decided to take a look back through the big guy’s genealogy to see the family members that share his tyrant DNA. Join us on a trip through the family tree of Resident Evil’s Tyrants.

We’ll be ordering our list based on the release dates of the first game each Tyrant appeared in, rather than their canonical development order because, quite frankly, no-one’s got time to work through Umbrella’s incredibly messed up catalogue of experiments. That means we get to begin where everything started, in the cold, dark hills of the Arklay Mountains, where a certain monster was just waiting for Chris and Jill to say hello...

Terror Rating: Too nostalgic for terror, but he almost killed Wesker, so that's something.

Kicking it all off, it’s the OG naked, genital-less man with a penchant for bloody murder. The T-001 Tyrant was a terrifying foe at the end of the original Resident Evil, and one of the few characters in the series to really lay into our super-powered chum Albert Wesker. The T-002 was the first successful outcome of the Tyrant project, and intended by its creators to be the ultimate lifeform. Unfortunately, being the pinnacle of all life doesn’t seem to make you immune to a rocket to the face, as Brad, Jill and Chris demonstrated in the closing battle of the game. Why isn’t it the T-001 if it’s first? We’ll get to that shortly.

M’lady. Despite his fedora-capped fashion choices, Mr. X is one of the most famous and beloved (read: terrifying) foes in all of Resident Evil history. Pursuing Leon and Claire through the halls of the Raccoon City Police Department, he presented a near-omnipresent threat. The 2019 remake only improved on his execution, his clumping footsteps sounding nearby sending a wave of terror shivering through our brain stems.

Terror Rating: Oh god why won't it leave me alone?

Soon to take a starring role in this year’s remake, Nemesis is the big daddy of Resident Evil villains (Wesker is the smaller but no less daddy villain, naturally). Stalking Jill and the other S.T.A.R.S. members through Raccoon City, this monstrosity is the most advanced Tyrant shown, capable lashing out with tentacled limbs and operating weaponry, including a rocket launcher and, in the case of this year’s remake, a rather nasty flamethrower. Nemesis’ black clothing, his stretched and burned skin, the horrifying teeth, and that oh-so-recognizable cry of “STARS,”; the entire design is iconic, and thanks to the new remake, will continue to haunt our dreams for years to come.

You don’t remember this one? Don’t worry, neither did we. Resident Evil Survivor isn’t exactly a standout title in the series, and even falls flat when compared to the other light gun releases. Supposedly a super-tyrant, the Hypnos gene within the Hypnos-T would kill off weaker cells, meaning the tyrant would constantly grow stronger over time. Unfortunately this led to it turning into a comical bulky mess by the end of the game, at which point the Hypnos-T Type tyrant took a sidewinder missile to the chest. There’s no recovering from that, buddy.

Terror Rating: A show off.

Code Veronica sadly remains a missing space in our personal Resi catalogue — you’re working on a remake soon, yeah Capcom? — but it won’t escape adding to our collection of Tyrant pals. Unleashed by Lord Ashford, the T-078 is one of a mass produced model, but that doesn’t stop it thinking of itself as a pretty big deal. The first encounter Claire has with this Tyrant sees it calmly walk towards her, as if to say “yeah, and what?” as she unloads her weapons. As it happens, a suitable “and what” turns out to be Claire letting a large cargo crate punt this fella out the back of an airplane and into the sea. It doesn’t pay to brag.

Veronica makes the bold choice to introduce not one, but two new tyrant versions into the mix. Bandersnatch is the more unique and grotesque, a spin-off designed based on one crucial question: Is one giant arm better than two? The answer, obviously, was no, and while it did look creepy the Bandersnatch was snuffed out by Steve Burnside in one of Code Veronica’s cooler cutscenes.

And here he is, the first mark on the Official Umbrella Tyrant Counting System. Umbrella’s  Arklay Laboratory teams weren’t huge fans of the T-001 thanks to the virus messing up its intelligence and nervous system more than expected. As such it was far more sluggish and less capable than later models; A good thing, too, because at this point in the series the protagonists still hadn’t evolved beyond rudimentary tank controls. Think of him as the twitching, cranky grandpa of the family, who won’t stop telling his grandkids about that time he fought with the famous Mr. Wesker.

Terror Rating: The joke of the family.

Embarrassingly labelled a failure by its parents (the Umbrella corporation, who else?), the T-091 — intended to be a fusion of the G and T viruses — probably should have taken one look at its superior Tyrant brethren and given up any hopes of being a threatening villain. We can only imagine Umbrella sighed as it insisted that no, it really did want to give this whole baddie thing a go. And so, the gangly-handed fella with an enormous beating heart of weak spot on its back was shuffled off into Resident Evil: Dead Aim, never to be acknowledged by most fans of the series.

The black sheep of the family, Thanatos was the work of one Greg Mueller, an Umbrella scientist who created and released the monster in defiance of Umbrella’s orders. Apparently Mueller was a fan of swimwear, as Thanatos turns up wearing little more than a pair of speedos. Saucy. Its affinity for water truly came through when Outbreak’s survivors managed to stun it with a big shock of electricity before making their escape.

Terror Rating: Capable of takling on large groups of survivors at once, and can instantly kill. No thank you.

One of the stranger Tyrants to pop up on this list, Tyrant C was clearly created during the period in which Umbrella was a little concerned about the lack of clothing on the big men. Showing up in a standalone expansion to Outbreak, it liked to walk around and punch or kick the bands of survivors taking it on. Original designed to kill Hunters, Tyrant C decided that survivors were much more fun to pummel instead. Gets bonus cool points for having little horns on his head, but then loses them immediately for using a weird, stretchy limbed spin attack.

Terror Rating: You'd best get out of his way.

Aiming to up the ante from Tyrant C, Umbrella skipped the majority of the alphabet to release the ferocious Tyrant R, which toted massive claws, superspeed and regeneration after changing forms. This fella gets special mention for also surviving being absorbed by a gigantic amorphous blob of flesh called Nyx. Even he proved no match for the capable Ada Wong, however.

Terror Rating: What's up with those shades?

Yes, we’ve found it; the most ridiculously designed and named Tyrant. Ivan, or should that be Ivans, turn up during the Wii’s lightgun spinoff game, The Umbrella Chronicles. Variants of the T-103 and bodyguards to Colonel Sergei Vladimir, two Ivans crop up in Wesker’s chapters and prove to be serious pains in the rear. Wesker battles them in a lengthy sequence which sees both him and the Ivans hopping around Umbrella’s secret facilities like super-powered bunny rabbits. And you’d have thought their shared love of indoor sunglasses would have endeared them to old Wesky.

No, wait, sorry, scratch that last one. Capcom clearly heard us because here’s the real winner for utterly nonsensical design. Apparently Umbrella’s global teams had a bit of rivalry going on, because the T-A.L.O.S. — or Tyrant-Armored Lethal Organic System, if you really want a laugh — was supposedly the US branch’s response to the EU-developed Nemesis-T Type. In true american style, that meant sticking as big a gun as possible on it. T.-A.L.O.S. came clad in armor plating and toting a massive quad rocket launcher, but that didn’t stop Jill and Chris from shooting it to bits anyway. T-A.L.O.S. represents the peak of the series’ absurdity, and we’d be happy if it never went this far again.

So there you have it! All 13 Tyrants to have ever murdered us in a Resident Evil game. The series has shied away from them in the recent, high-numbered titles, but thankfully the Resi 2 and 3 remakes have given us a chance to appreciate these perfect lifeforms all over again. Which is your favorite? Let us know down in the comments.