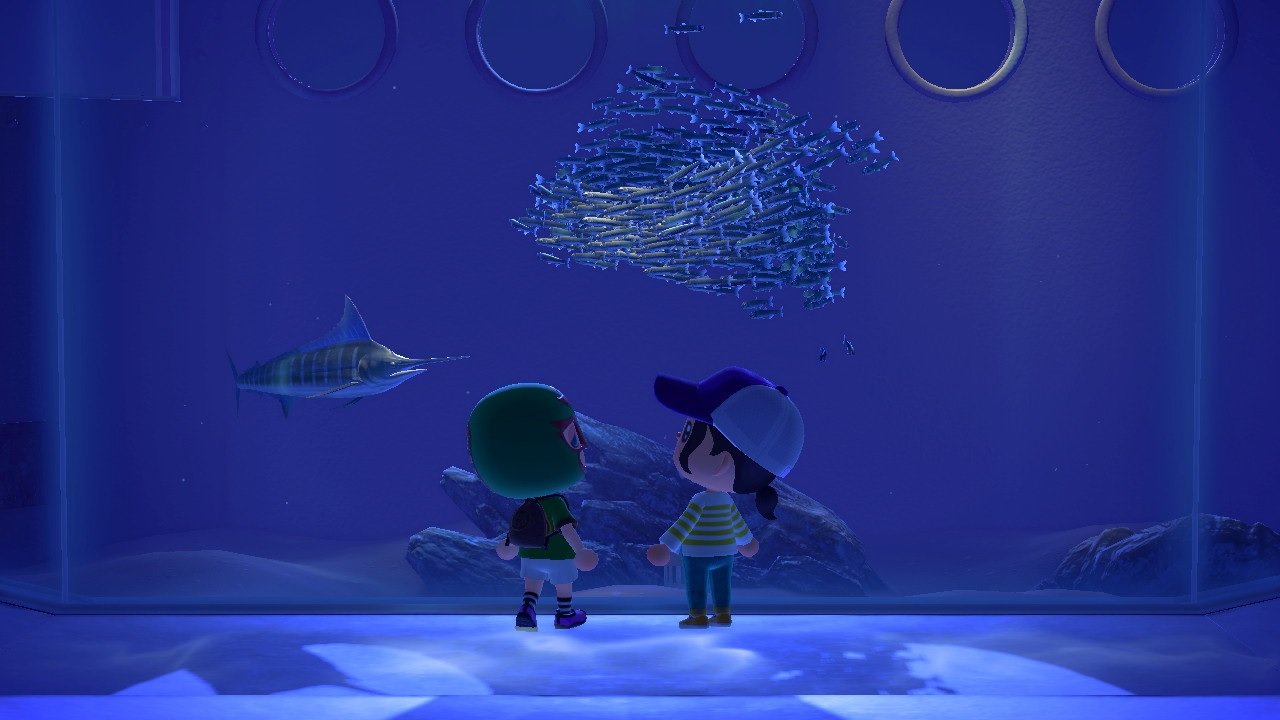 Animal Crossing's Museum let us have our first date in months

On Tuesday, March 3, my wife and I were talking late into the night on FaceTime, as had become routine by this point. But nothing was ordinary about it.

The lateness of our calls, already a necessity as our lives split across both shores of the Atlantic, had been stretching further into the small hours over the weekend. Themselves, the culmination of months of similar conversations, as the calendar drew nearer to March 5 when she was scheduled to fly from New York to Heathrow, to join me at home.

While the long, arduous process of visa applications continues, we have made do with nightly calls to tend to our Stardew Valley farm together, or hit play on Netflix’s The Witcher at exactly the same time. And every few months one of us has made the 14-hour journey, door-to-door, so we can cook for each other, and hold hands and walk in a park, and enjoy the comfort of presence that telepresence sadly can’t emulate.

But on that early March Tuesday, with two days until our first reunion since Christmas, the tension wasn’t built of excitement but mounting dread. As the entire world is now acutely aware, coronavirus was coming. While planning to visit friends for birthday parties and D&D campaign sessions, we were also setting risk limits for the inevitable. Any case of sustained community transmission on either side of the flight would make travel irresponsible and even dangerous, and the next day our lines were crossed.

The following two weeks were just the worst, watching the world plunge further into the depths of a crisis it is still only just comprehending. As our borders finally closed to each other, there was no satisfaction or validation that we’d made the right call, only the worry for those now in mortal danger and the palpable lack of a hand to hold. And to make matters worse, we’d run out of things to do in Stardew Valley.

And so, as for many people now thrust into a world of isolation, Animal Crossing: New Horizons arrived like a ray of golden sunshine. An aggressively charming escape to an island without rolling cable news coverage or alarmingly curved graphs. An outside world where you can visit your friends in gatherings of up to eight people. Our standards of paradise have slipped somewhat, understandably.

The past week has, despite stricter quarantine restrictions for many of us, been a marked improvement. The cutesy sheen of a new game to explore can account for some of it, but the way Animal Crossing presents its entire ethos of friendship and collaboration has opened the lines of communication at their most vital time. Gifts and letters sent in the mail by friends from afar are the perfect middle ground between 24/7 Zoom calls and cocooning yourself away from the world.

But what has proved the perfect balm for these troubled times is the way Animal Crossing treats multiplayer. The first time we visited each other’s islands, my wife delighted in being asked if we should go back to her house or mine, a question she’d not heard since before we got married. The act of visiting, while cumbersome in its typical Nintendo way, is strangely grounded in the physical world like this. Not being able to see a marker on your map means you can lose each other if not sticking together on the same screen. Some players have even used this to play games of hide and seek, or sardines as they move friends' birthday parties online.

detail pix + pix of our game of Sardines, suggested by @dannyducker !!! it's like inverse hide and seek, one person hides and everyone else goes to look for them! once you find them, you stay with them. you hide all scrunched together like sardines until theres one person left :3 pic.twitter.com/PekTCChr5z

In Stardew, there was always work to be done, meaning our in-game avatars would often be running off in separate directions to accomplish all the jobs we wanted done before the end of the day. But the slower pace of Animal Crossing lets us sit and enjoy each other’s company, or give guided tours of all the things on our island we’re most proud of putting together.

One of these tours took us into Blathers’ newly constructed museum, most of the exhibits still half-empty. For a museum date it’s not quite the worst we’ve had. The last time we went to an exhibition together was during the European heatwave of 2019, when temperatures in London hit 100 degrees. We stood in front of an early Celtic copper bucket in the British Museum for 10 minutes just because there was an air conditioning outlet directly above it.

The lack of crowds (and stifling heat) made our Animal Crossing museum date a much more pleasant experience. Running around, getting jealous of the fish one of us had that the other didn’t, taking photos with the exhibits. It was a heart-warming, playful experience that I thought wouldn’t be possible three weeks ago, when we cancelled her flights. The museum itself is a masterpiece, with themed display cases and all the trappings of a good inner-city exhibition space. All that's missing is the gift shop.

Outside we tried to catch more memories as the sun went down but were continually photobombed by the carpet-selling camel, a perpetually pissed-off koala and Kody, an intensely dislikeable frat-bear that my wife calls Bro-dy. It was a perfect date.

There are very few experiences in games that simply give you somewhere to be in the same space as another person. Most games neglect the social aspect of their spaces, using them as the blank canvas for all the well-crafted gameplay mechanics they want you to pay attention to instead. And quite rightly, a lot of them are very good and worth paying attention to. But for right now, being able to send friends a small gift whenever I think of them, retreat to a cartoon utopia, or hang out and watch the sunset with my wife regardless of timezone? That's enough.