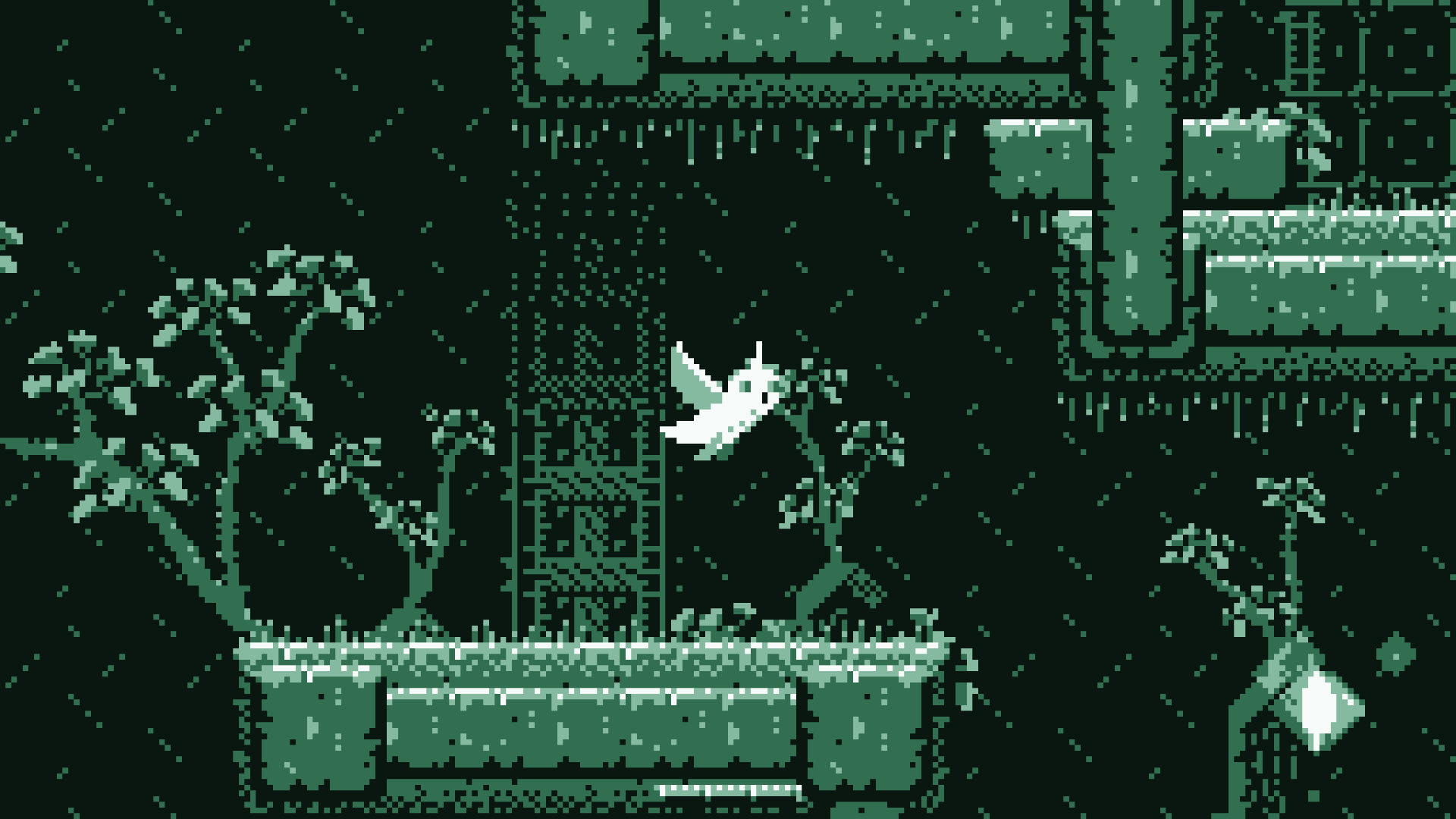 Every Saturday, studios and individuals the world over take to Twitter to share images and videos of their games in development as part of #ScreenshotSaturday. It’s a fantastic celebration of how widespread and varied game creation has become, not to mention a great way to keep an eye on upcoming gems or spot incredible artwork. Collected below are some of the coolest stills, gifs and videos from this weekend which we’ve gathered for your perusal pleasure. This week we have owls, space-faring kittens and minimaps, oh my!

Created as part of GameBoy Jam 4, the fidelity of Down Ward’s art will be immediately recognisable to anyone who grew up with Nintendo’s old handheld. The haunting beauty of the game, however, is entirely new. A 2D platformer, Down Ward sets you behind the wings of snowy Owl, Gable, as she travels the dead of night to reignite ward towers by collecting and delivering incandescent feathers.

Gable will have to be careful along her flight path, as there are all manner of twisted creatures waiting in the wilds. This week, developer Fisholith is showing off their work on these unsettling herons which attempt to spear Gable as she passes, detaching their skeletal heads to strike. Down Ward is still in development, but you can follow the game and download a preview version here. We highly recommend listening to the game’s soundtrack (also available through the link) — there’s only one song, but it captures the mood of the game perfectly.

Trees! We here at AllGamers love our woody, oxygen-generating friends (I mean just look at the majestic Aspen), so show us footage of some gorgeous woodland from your game in development and we’re all ears, or, er, eyes. But if there’s one thing we love more, it’s an adorable kitty. So when developer Joyce showed off some new footage of trees in their indie game Astro Kat, we couldn’t help but take note.

A “sci-fi themed action adventure game,” Astro Kat lets you take the fittingly named Kat on an adventure between planets to find animals, friends and, based on this week’s gif, dress up in some rather dapper hats too. A solo project, Astro Kat is in early days yet, but you can check out the game’s site here which contains dev log updates for major progress points.

Sometimes in this line of work we’re lucky enough to come across a piece of artwork so jaw-droppingly beautiful that we’re left searching for where that pesky lower skull bone landed for hours after.

Settling on a comfy combo of pixel art + PS1-ish pre-rendered backgrounds and it's feeling super good to work with  #screenshotsaturday pic.twitter.com/AfyrMEoELa

Steph Cask’s retro themed house might not have a game attached directly, but by the gods we wish it did! The gorgeous piece is filled with intricate details that really give the tiny home a ‘lived-in’ feel. Cask’s delightful dwelling would look right at home in an old classic like Legend of Mana or Final Fantasy 9. Screenshot Saturday isn’t just about spotting upcoming games we’d like to try, it also gives us the chance to appreciate the incredible talent and effort of all those involved in game development. Whether working actively on a project or simply honing their craft for the future, we love to see developers and artists like Cask exhibiting their work each week.

The best part of Screenshot Saturday is getting a glimpse inside the development process. It’s fascinating to see features develop over time as indie artists and programmers approach tasks in their own unique style. Here Matt Swift shows off his attempt at a developing minimap overlay which fills out each room as they’re explored. You can see the minimap generation map perfectly to the player’s line of sight, accentuated through the yawning shadows which stretch out from the object passed.

Swift’s atmospheric ship crawler has already got buckets of tension pouring out from the short clips we’ve seen so far, and we're keen to get a longer look at it all put together. From his earlier tweets we can see it’ll also involve dispatching some aggressive unknown beasts with a superbly visual flamethrower as shown below:

A new scene in our game! Don't miss the lovely pet-like(?) creature in the end Do u like it?#screenshotsaturday #indiegame #gamedev #indiedev #madewithunity #gaming pic.twitter.com/0l3abhqbVM

Speaking of atmosphere, one glimpse at this clip from Vigil: The Longest Night should give you the full picture of the gothic horror theming Glass Heart Games is aiming for. Reminiscent of Bloodborne’se early stages, Vigil is set during the Black Death’s ravaging path through Europe,  and tasks you with battling past a variety of plagued villagers and monsters (wait a minute, we don’t remember that part in the history books) as you uncover clues to the nefarious goings on.

Time-manipulation powers will help you overcome most enemies, but we’re not sure they’ll provide protection from whatever that thing is, appearing towards of the end of this week's short video. Vigil: The Longest Night was successfully Greenlit on Steam, but has yet to make it to release.