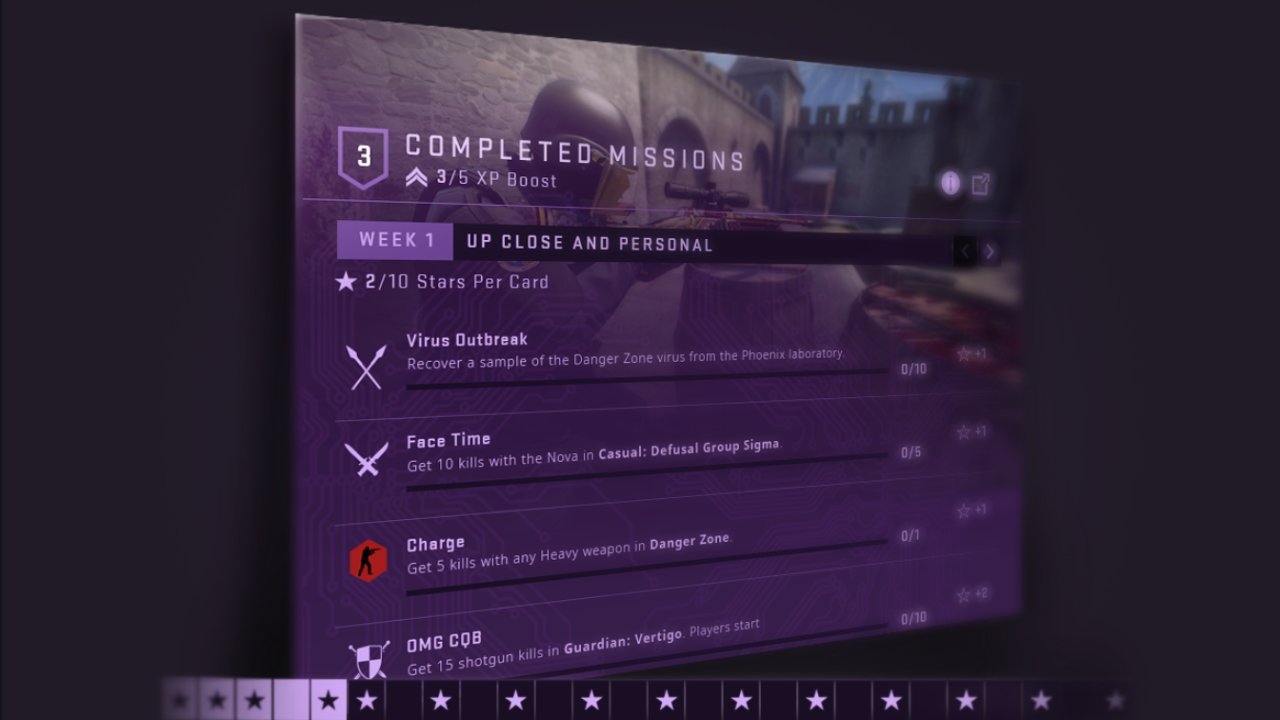 We’re into week 14 of Counter-Strike: Global Offensive’s latest operation, and it's the biggest we’ve had yet. Operation Shattered Web introduced the first-ever CS:GO battle pass, with unique player skins, weekly challenges and more. Sure, it was pricier than past operations, but with all that content, what could go wrong? Well, let’s start from the top.

Battle passes have been around for a while now, with the likes of Fortnite, Apex Legends and Valve’s own Dota 2 perfecting the technique. We know the score by now: Complete challenges and play matches to level up the pass, earning sweet rewards in the process. Simple, right?

The launch of Shattered Web certainly seemed to tick all the right boxes. Ten stars to earn, plenty of rewards, and crucially, an excellent Strike mission. These co-operative levels have been the darlings of previous operations, tasking you and a buddy with sneaking through levels of AI baddies, hunting down hidden coins and enjoying the schlocky story. Shattered Web’s opening mission was arguably the best so far, featuring plenty of surprises and a worrying number of knife-wielding terrorists.

However, 13 weeks later and we haven’t had a single new Strike. Despite the increased pass price and flashier advertising, datamines appear to have revealed just three of them for Shattered Web, and it seems Valve has shovelled the remaining two in at the very end of the pass. It’s a real shame, and sadly things only get worse from there.

A big reason people buy passes is to reap the rewards, and Shattered Web’s are an oddly stingy mix. Where Apex Legends and Fortnite hand you enticing weapon skins for reaching higher levels, CS:GO instead throws you a lottery, effectively unboxing a crate instead. That means by grinding through each week’s mediocre batch of challenges, you too can live the bitter disappointment of receiving yet another rusted rifle you’ll never use.

XP boosts for CS:GO’s almost meaningless player ranks and an underwhelming collection of disposable stickers and sprays bulk out the majority of reward tiers, leaving little to work towards.  Dota 2, by comparison, allows players to wager extra MMR on future games, work through a challenge maze by playing as different champions, coach teams to victory, or just mess about with a silly snake balloon.

CS:GO fans may gripe about Fortnite’s gameplay, but at least its battle passes give you evolving skins, fancy weapons and puppies. Puppies! Counter-Strike's debut battle pass is content to cough out locked crates at several levels, as if expecting you to pay more for the honor of unlocking them. Ironically, they’re one of the best rewards as they’re rare enough to be worth at least half a dollar on the market, helping you slightly recoup your investment.

Stacked up against the competition, CS:GO’s pass output looks miserly, and we haven’t even mentioned the empty levels. Of the 100 stars you can collect throughout the event, 58 of them will get you a fat lot of nothing. We wouldn’t even mind a reward every other level, but the pass frequently has reward droughts of up to five blank spots in a row. But hey, you can always pay to get more stars! There’s plenty of room here for the music packs, voice lines, scoreboard effects or ending screen animations we see in other titles, but CS:GO hasn’t bothered with any of them, even features that are already built into the game.

The big sell for this operation were Agents, the first alternate player models in CS:GO (not counting gloves, the only part of their model the player can see). Of the entire lot, the priciest is currently going for around $8 on the Steam marketplace, with most available for less than a buck. If you’re just after one of the shiny new skins, you’re better off buying it directly rather than working through the pass to roll the dice.

We’re jumping ahead of ourselves. The core of any battle pass, of course, is challenges. Each week of Shattered Web proffers a selection, with six possible stars to earn. Unfortunately, there’s little here to get excited about either. The lack of Strikes aside, each batch feels like they’ve been churned out by an algorithm designed specifically to provide minimal fun. Kill 20 enemies with an SMG in casual. Win 10 rounds on X map in competitive. Every week reveals a new wave of tedium. Battle royale titles like Apex get away with this format by making them disposable daily challenges, small extras you might complete while you play the game as normal. CS:GO places them as the prime focus each week.

We understand that a competitive game like CS:GO isn’t the easiest to set challenges for, as you don’t want to encourage poor play from teammates. But surely we could ask for a little more fun than this uninspired checklist. It only took a few weeks for the arrival of new challenges to shift from an exciting moment to a question of when we’d have time to bother slogging through enough to claim six stars.

The saving grace for many has been the Guardian missions – co-op levels in which you face off against waves of attacking bots. They’re not new to CS:GO, but here at least Valve has clearly taken the chance to have some fun. The short level mix simulated competitive bombsite attacks with more outlandish tasks like blowing enemies up with explosive breach charges. They’re a breath of fresh air from an otherwise stale canister, which only leads us to wonder once again why Valve doesn’t release Guardian as its own dedicated mode. With at most one arriving per week though, we’re not sure they can really justify the cost of the pass.

Perhaps Shattered Web will turn around in the final few weeks, but so far there’s been little here to convince us that CS:GO can compete with the perpetual content machines of other shooters, or even provide anything unique. When operations are so few and far between, we’d really hoped for better than this for our favorite FPS.