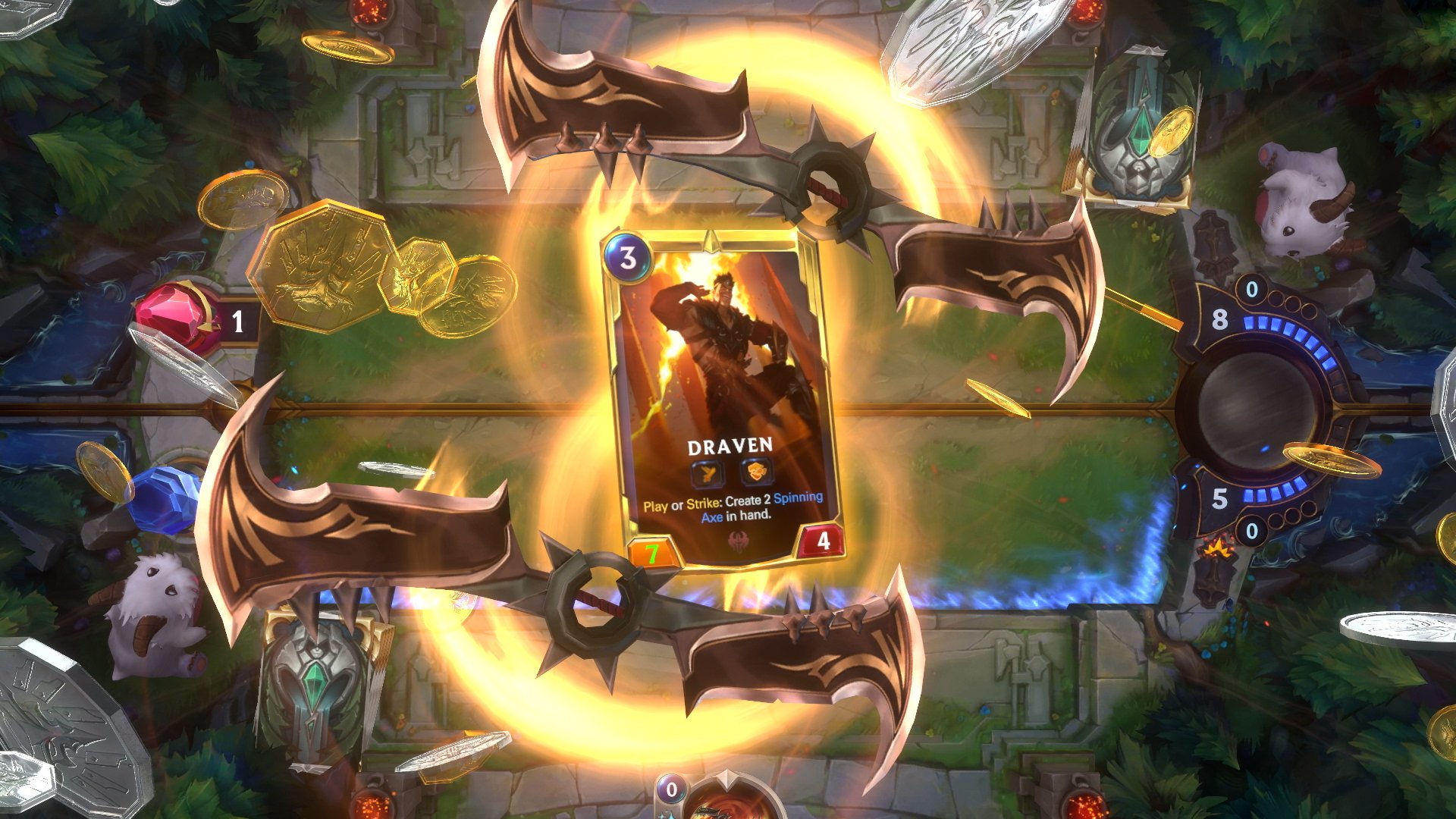 The Magic pro stopping Legends of Runeterra becoming another Artifact

Riot’s new card game Legends of Runeterra is out in the hands of its legion of League fans now, enticing CCG noobs and veterans alike to pick a card, any card. But swapping the MOBA’s traditional battleground for a virtual tabletop wasn’t the only bit of wizardry Riot had to pull to make the drama of the Summoner’s Rift fit into a deck. Especially not when its closest competitor’s recent attempts to do the same ended in such high-profile failure. So how do you avoid the jinx of becoming the next Artifact, and make a spellbinding experience for players? Is it just sorcery? Well no, it turns out it’s Magic.

Steve Rubin serves as the live balance lead on Legends of Runeterra, having joined Riot two years ago as a game designer. But before that, he was simply very good at card games. Very good. Over six years of professional play in Magic: The Gathering, Steve has bagged 14 Grand Prix Top 8 finishes and a Pro Tour win. He’s also attended world championships (twice) and for three years competed in MTG’s Platinum Level bracket. That’s all off the back of what he describes as 21 years of experience, having started playing the physical card game when he was just six years old.

“That is a bit much now that I’m realizing it, but I played when I was a kid and throughout my entire childhood,” Steve says. “But now that I’m working at Riot, I’m semi-retired and not quite as good as I used to be since I can’t put the time in.”

Regardless of his current tour-winning ability, a lifelong experience with one of the most enduring collectible card games (CCG) on the planet qualified him in Riot’s eyes. When Legends of Runeterra was still one of the countless mystery projects in development that are just starting to peek above Riot’s parapets, Steve was one of the lucky few invited to play and give feedback.

“I’m the first non-Rioter to playtest an R&D game,” Steve boasts, justifiably. “I was brought in with three other Magic pros to evaluate where Legends of Runeterra was at. We tested it out and at the time I actually didn’t really like the game that much, but since then we’ve made so many extra improvements, so that was definitely a catalyst for us to improve the game.”

As with most games, the version a lucky portion of the public are currently poring over is nowhere near the state before Steve and fellow pros – Alexander Hayne, Shahar Shenhar and Jacob Wilson – got their hands on it. For starters, one of Runeterra’s most unique features, its round structure, was in dire need of attention.

Legends of Runeterra in its current state resembles a sort of NFL game with spells, or a gentleman’s agreement slap bet. One player takes the initiative in a round and plays attacking cards, while their opponent defends. Then, red-cheeked and angry about the damage they’ve just taken, their roles swap and the defender exacts their revenge. This was not always the case, and was a big part of Steve’s initial dislike of the game.

“It used to be that you could attack every turn, and what would end up happening is that if one player got slightly ahead it would be almost impossible to come back,” Steve explains. “Because systematically you could continue to attack, so we adopted the alternating round system. So now you have one round where you’re on defence, and one round on offence, which is helpful for players to figure out ‘oh, what should I be doing right now?’”

For players coming from other CCGs such as Hearthstone, this game flow could take some adapting to yet isn’t uncomfortable, and MTG players could feel a little more at home given Steve’s influence. But the real aim for the Runeterra team is to open up a typically insular genre to the sizable audience its parent title has drawn in. The problem there is that, in 2020, this approach has been repeated enough times to draw critical eyes. Hearthstone, Gwent, and Valve’s still-fresh disaster Artifact preys heavily on everyone’s minds, and Steve’s too.

“It’s kind of a spicy question, why are we making a card game?” Steve admits, candidly. “And we’re not really thinking about necessarily saturating the CCG market, but bringing the CCG market to new players. And we do that by removing that paywall, where in order to compete you need to spend money, so we’re a lot more accessible.”

Hearthstone, being the first in its class, enjoyed certain privileges. But relying on the brand recognition of characters, names and faces that millions of fans worldwide have been playing with for a decade at this point isn’t a guarantee of success. As Artifact proved when players discovered the innovative integration with Steam’s marketplace wasn’t quite the bartering utopia Valve sold it as.

The idea of getting any single card you wanted from other people’s spares was enticing, but in reality the best cards – such as Axe – skyrocketed in price as soon as players solved the meta and realized how valuable he was. On top of this, money factored into other features players weren’t expecting, such as the only way to play competitively at launch: the ladder.

“Artifact definitely taught us that we really need features in the game that motivate players to play,” Steve says. “That’s why when we fully launch in 2020 we will have a ranked mode, which is really important because one of the problems people had [with Artifact] was ‘oh this is weird, there’s no ladder for me to play on, I have to spend money to play in a run’.”

Legends of Runeterra’s monetization also attempts to fix other bad experiences in the genre that Steve and fellow Rioters have suffered in their collective years slinging cards. Instead of paying for random card packs, called boosters, you can pay for Wildcards which let you pick any card of the same rarity from the library and own it. While this solves a number of issues with the fairness of building a library and the cost of keeping up with new content, it had some surprising side effects for players.

“There have been a lot of games that have come out and they pretty much all use booster packs. And it’s kind of funny because booster packs aren’t just a net negative thing,” Steve says. “We just don’t think that players should have to, whenever an expansion comes out, buy like 50 packs just to obtain content. So we actually had a system with no booster packs at all, and no progression, but we did player labs and we were really weirded out because players were like ‘where are my booster packs?’ And we were like, this is weird because we’re just giving you everything, what more do you want? But players just love to open booster packs.”

Whether this is a kind of Stockholm Syndrome holdover from every other CCG or just a dopamine injection of present-opening missing from the game, Riot decided to work out how to get the same experience without any of the model drawbacks. The result is The Vault, a weekly crate of random goodies that levels up its contents depending on your in-game performance.

“It’s essentially a booster pack but what we’ve done is we’ve made it merit-based,” Steve explains. “The more you play the better it gets, and it’s just free. You just get that from playing. So we’re giving players that experience of ‘oh, I get to open stuff!’ But we’re doing it in a much more player-focused way where they don’t have to spend on it.”

Wildcards and weekly Vault rewards also help slow down one of the other curses Steve sees in CCGs: time to solve. “We’ve found that a very negative experience in card games is when you go up against a meta deck that seems like they’ve just bought the deck,” Steve says. “So you’re just trying to play for the first time, and you’re playing against someone who’s spent $200 and you’re automatically at a disadvantage.”

To try and prevent the speed at which the community discovers the definitive single deck that beats all others, the card earn rate is capped for paying players. Only a certain number of Wildcards can be purchased per week, but you can still play and earn drops.

“We really do this because we think one of the most interesting times in card games is when content is first released,” Steve says. “But it’s really lame when, as a free-to-play player or a casual player, the meta gets solved before you’ve even really experimented with the new cards. And then the players who monetize just buy those decks and you have to play against them. So we really try to preserve that period of a few weeks where everyone’s trying to discover what’s going on and you can really experiment.”

So even if you haven’t gotten into this instance of the public beta by pre-registering, there’s a chance that when new Regions are released you won’t be left in the dust. When new Regions do release, they’ll be the equivalent of new classes (or colors in MTG) being added to the game at the start of every season. While this obviously can’t continue indefinitely after launch, Steve says the Riot team is planning on monthly updates to address balance and new content equally, similar to LoL’s current service schedule.

Other games like Hearthstone have found the issue of changing and updating the balance of the game difficult to address, resulting in power creep and the separation of the game into Standard and Wild. But Steve is convinced that all the changes they’ve made above, as a direct result of learning from other CCG mistakes, give them the advantage here, too.

“In other games they might be reluctant to make changes because, y‘know, shit’s just so expensive,” Steve says bluntly. “When you change a card that somebody spent $30 to get the packs for it, that’s a really bad experience for them. But since it’s so easy to get cards in Legends of Runeterra we’re pretty much going more with the LoL approach where our mission statement for live balance is that every Champion’s gameplay dream is realizable. So we want you to be able to build a deck with any Champion, not necessarily at the highest competitive level, but you can kind of do your thing and win games with it.”

With Legends of Runeterra now being put through its paces by the people it is catered for, these changes to the formula will soon be borne out. But with a support schedule as frequent as LoL’s, and a development team used to taking feedback from its base, even if they turn out to be huge mistakes there’s nothing to stop Steve and Riot learning from them, too.

“We’ve taken what we’ve learned to be bad in the genre, or bad experiences in the past, and made a game that’s improved on it. So I would say that specifically we were inspired as players by Magic, but Legends of Runeterra is our amalgamation of ‘what if we did this the right way, and were really player-focused, and learned from all the mistakes that we’ve seen before?’”