The Corridors of Time puzzle solution has been found, letting Guardians get a new Bastion fusion rifle as a reward. 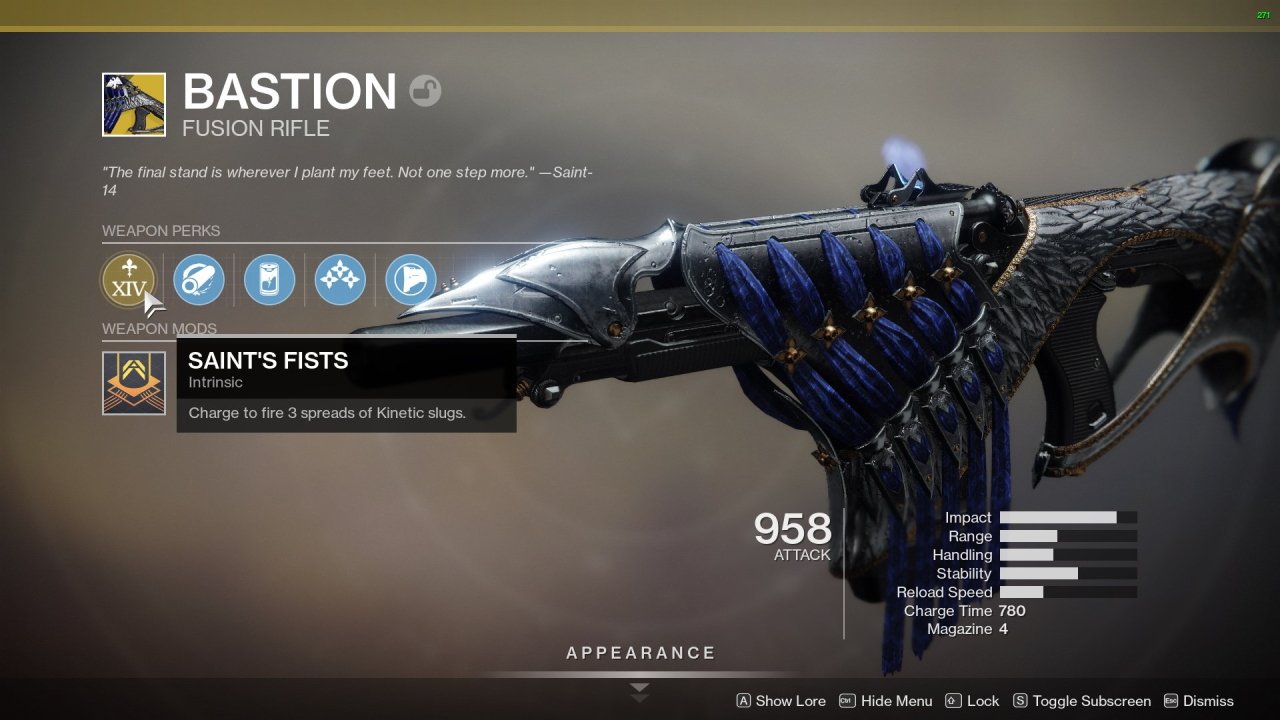 All of the correct answers to King Yemma's quiz in Dragon Ball Z: Kakarot.

A round of applause everyone, Destiny 2 has a new gun! Yes, we know it’s a common occurrence, but this one has involved a lot of work. Thanks to the collective hard efforts of far more dedicated Destinyites than us, the Corridors of Time quest has officially been solved, opening up the route to the Bastion exotic fusion rifle. According to Bungie’s timeline, this quest will be available to all later, but if you want to claim it for yourself right now then read on to learn how to get the Bastion exotic fusion rifle in Destiny 2.

The Memento quest to get the Bastion exotic fusion rifle in Destiny 2 is started by speaking with Saint-14 in the tower, but, for now at least, you’ll also need to have beaten the Corridors of Time quest. If you haven’t even begun that yet, hop on over to our dedicated guide by clicking here. If you’re up to the puzzle, read on. Before Saint-14 will give you the Memento quest, you need to solve the Corridors puzzle by passing through the 30 doors in this order:

Once that’s done and you’ve played through the ending sequence (we won’t spoil it here), interact with the grave and you’ll gain the Chronometric Weapon Core. Head to Saint-14 in the Tower to get the next quest: Memento.

Saint-14 will send you to collect five pieces of Fallen intel. This is done by defeating Fallen Captains and Servitors. We recommend heading to either Winding Cove in the EDZ, or the Hallowed Lair Strike entrance at Thieves Landing in the Tangled Shore. Wherever you chose to do it, kill the Captains, get the drops and then speak to Spider.

Spider will send you to the Empty Tank Lost Sector to kill an enemy named Aksiniks, Bound by Honor. Unbind him by shooting him in the face repeatedly, then return to Spider.

Next up you need to grind some fun fun Public events as follows:

You can complete both regular and Wanted bounties towards this total, so be sure to pick them all up from Spider. For Challenging enemies, anyone with a yellow health bar counts, with plenty spawning during each Public event, so overlap these goals to save time. Interestingly, Heroic Public Events count twice towards the required total of eight. If you don’t know already, be sure to learn how to start Heroic Events to save some time on your quest to get the Bastion exotic fusion rifle in Destiny 2.

With the grind complete, travel to the Trapper’s Cave Lost Sector in Four-Horn Gulch in the Tangled Shore. You’ve been sent here to find a grave, but it’s not as you’d traditionally recognize. Make your way through Trapper’s Cave until you reach a small waterfall. You should see a bunch of mist spewing out of a corner here. Walk over and interact with the floor here for the next stage of the Memento mission.

You’re almost there, just a little more and you’ll be able to get the Bastion exotic fusion rifle in your hands. The last big stage of the Memento quest is to take part in a special version of The Hollowed Lair strike in the Tangled Shore. Play through and take out the enemy named Reysk, the Waning Light. They’ll appear in the boss fight, so keep an eye out for them spawning and be sure to kill them before you defeat the boss and end the Strike.

With Reysk dead and the Strike beaten, head back to Saint-14 to complete the Memento quest and get the Bastion exotic fusion rifle in Destiny 2. Congrats! When you’re done admiring its charge up Saint’s Fists perk and Elemental shield-surpassing Breakthrough perk, why not use it on some other Destiny 2 quests? Here are a couple to fill your time: