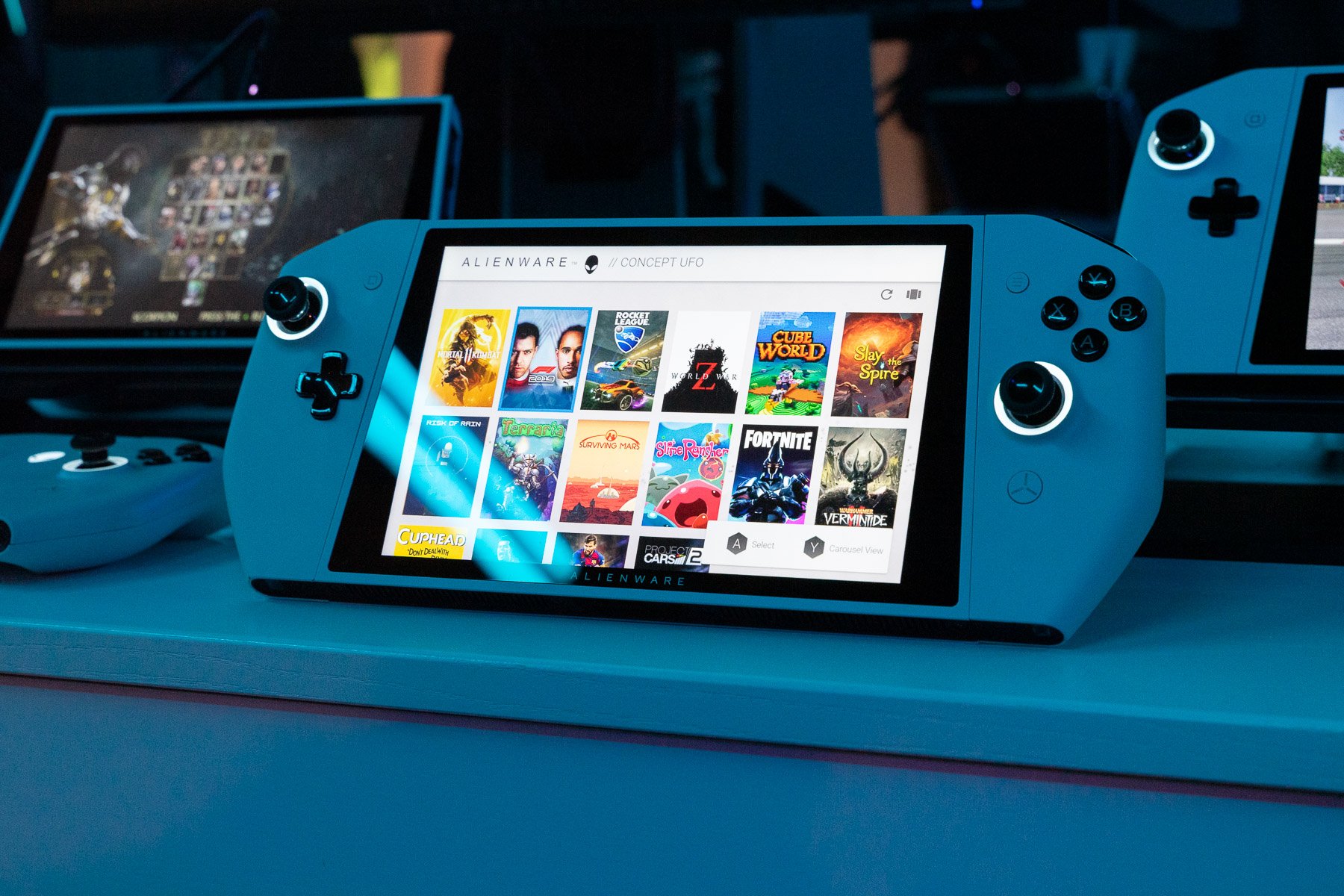 At CES 2020, the Concept UFO from Alienware was revealed. Captivating the attention of gamers including ourselves, Alienware’s Concept UFO feels reminiscent of the Nintendo Switch even though it’s meant to be a tiny gaming PC. It can be played in handheld mode or docked, and includes detachable controllers.

While there’s still a lot we want to know about the Concept UFO from release date to price, on question stands out above the rest… will it be able to run Steam?

Note: This article is speculative. Dell has yet to officially address whether the Concept UFO from Alienware will be able to run Steam at launch.

The short answer to whether the Concept UFO from Alienware will be able to run Steam is that we don’t know for sure, but the answer seems to be trending towards yes. Although, it's worth noting that the version of Concept UFO available for testing at CES 2020 runs Alienware’s Command Center, and that’s pretty much it.

This was emphasized in an early impression article from Tom’s Guide.

“Right now, UFO is using a spin on the Alienware Command Center, which offers some title aggregation, but it’s not perfect.”

However,  The Verge had an interesting experience when testing out Rocket League on the Concept UFO.

"The Concept UFO runs a custom launcher on top of Windows 10, but the underlying software is still standard Windows: launching a game like Rocket League actually brings up the usual Steam launch dialog."

Based on the information that’s currently available, it seems like running Steam is an inevitability given Dell’s insistence that the Concept UFO will function as a full gaming PC. It'll boast the latest Intel processor, and run on Windows 10.

“This [Project UFO] is going to be a full PC,” Ray Watkins, Dell’s Consumer Product Reviews Manager told Tom’s Guide. “So, that’s where it’s the first of its kind. It runs for Windows. It’s a PC in a unique body style.”

Despite all of this encouraging info regarding Steam on the Concept UFO, we've yet to see the final build of the device and how it runs (or doesn't run) Steam. Furthermore, Concept UFO is still in development with no release date or price point announced. If Dell wants Concept UFO to offer the freedom of a gaming PC (and it sounds like they do), they’ll need to offer the ability to play games on a multitude of launchers.

It’s not just Steam that's up in the air as there’s no clear word as to whether it’ll be able to run other launchers like UPlay, GOG, Origin, or even the Epic Games Store (and we all know how Epic loves to push their store by all means possible). You'd think for a full PC experience, you'd be able play games with the same launchers used on a gaming desktop or laptop. Otherwise, why buy Concept UFO over the Alienware m17?

The logical conclusion is that yes, the Concept UFO from Alienware will be able to run Steam. How it will do this is unclear. When looking at how PC-focused the test build is at CES 2020 (as seen in the video below from Engadget), it's hard to picture Concept UFO not running Steam in some capacity. What do you think?

Stay tuned, as we’ll be updating this article as more info on the Concept UFO from Alienware is made available. Until then, what are your thoughts on the device? Will you buy one if it’s capable of running Steam, or do you find the design somewhat ugly? Comment below!