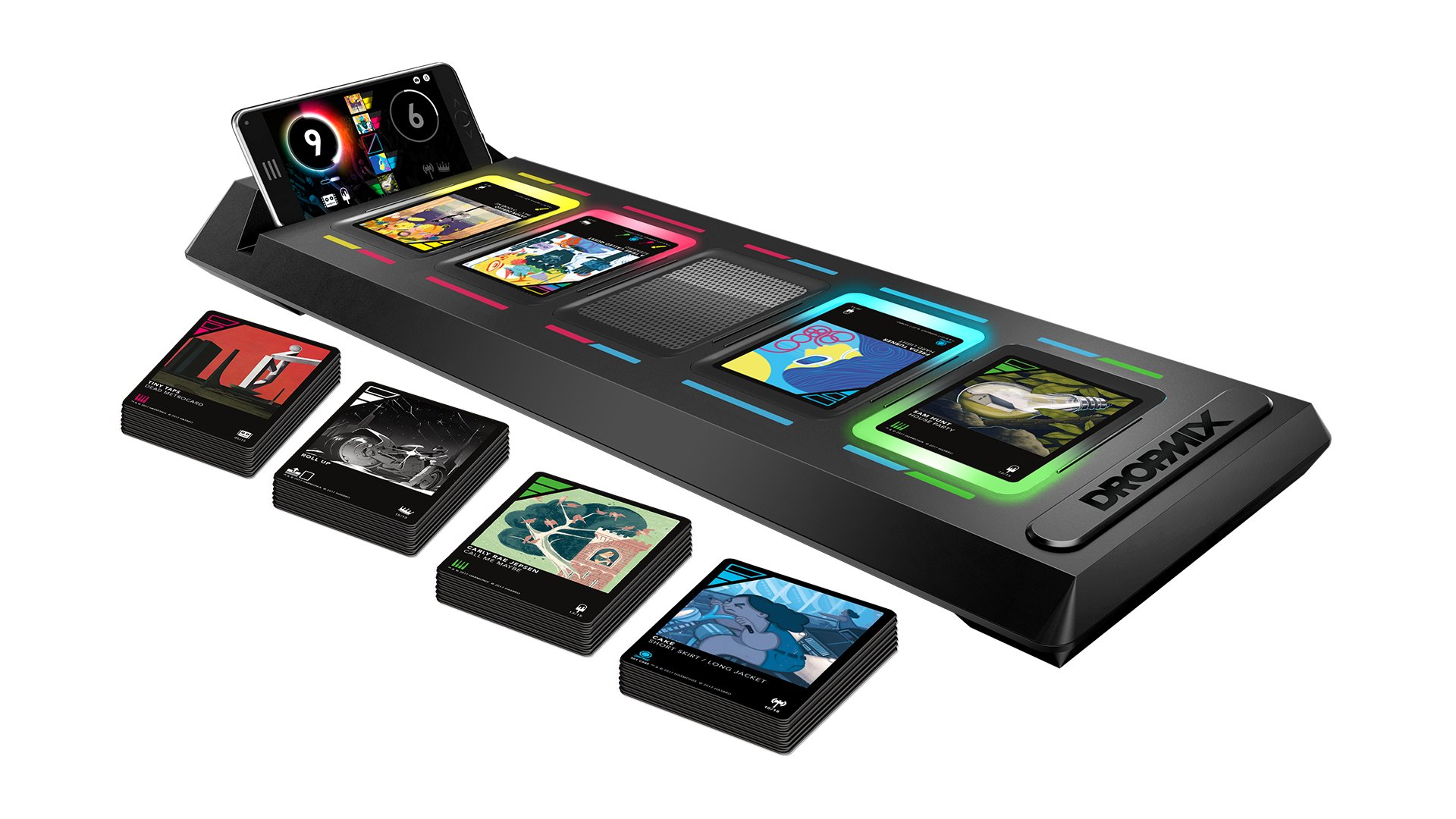 What's the deal with... DropMix?

Guitar Hero maestros Harmonix have a new music game out called DropMix, so why aren’t we all playing it? There’s a good chance you’ve not even heard of the card-dropping tabletop party playlist mixing game, so we should probably fix that problem before thinking about any of the game’s faults. Here’s everything you need to know about DropMix and whether it’s something you should be picking up.

DropMix is a music-mixing peripheral to link to your mobile or tablet. The impressive beat-matching guts are made by Harmonix, undisputed kings of the rhythm genre, and the weird Yu-Gi-Oh style card deck is made in partnership with Hasbro, emperors of plastic toy land. The game is a similar combination of physical peripheral and digital gameplay to the Hero line of music games before it, but this time the instrument is a deck of cards.

You play by placing special cards (with NFC loops baked into them) onto the playing surface of the board. Each card contains a specific segment, or loop, from a song that Harmonix have bagged the rights to use. It might be the vocals from Sia’s Chandelier, or the drum beat from Run DMC’s It’s Tricky, depending on the genre of the deck. There are currently four loose genres, rock, hip hop, electronic and pop with country to be added soon. Because each card is only one instrument track from each song, they can be combined together without getting in each other’s way and make some seamless mash-ups that would challenge even professional DJs to mix on the fly.

How do you play DropMix?

You can spend hours just messing around with the cards to make your favorite mix, but the game has competitive and co-operative modes, too. In Clash mode, you go face to face in 1v1 or 2v2 battles. Each player or team puts together a deck of 30 cards each to choose a hand from at random. You then have two turns each to place your cards according to a point system, where every card has between one and three levels and you can only place equal or higher level cards on top of the current one any space on the board. There are special FX cards which change rules or force your opponent to lose points, and an “equalizer” which spins a wheel to determine if your opponent has to clear any slots on the board. The first to 21 points wins.

There is also a co-operative Party mode where players all grab 5 cards from a single deck and work together to fulfill requests from “fans” in the game. For example, place a green bass card, or a level 2 card, or any hip hop drum beat. If you can fulfill the request quickly, you get more points, but if you get it wrong you lose points. It’s a frantic mode that sometimes kicks out a fun song once the game puts together all your tracks, and you can save any mix to memory so you can recreate it later.

How do you get DropMix cards?

Here’s where the fun of DropMix falls away a little. It’s a card-based game, and like almost every other card game on the planet, expanding your collection is costly. The base game comes with 4 small playlists of 15 cards each. After five or six games, you’ll begin to see the seams of how the magical mixing software works and subsequently might lose some enthusiasm for the eighth drop of that one Disturbed song that you have. There are multiple ways to get more cards, including buying playlist extensions of another 15 cards, or “discover” packs of 5 cards each.

Constituent parts of every song in the DropMix system are spread out across playlists and discover packs, so the only way to get each instrumental split from LMFAO’s Sexy and I Know It would be to purchase the Electronic playlist extension and all six series 1 Discover packs (unless you look on the internet and find out which pack the one you’re after is in because thankfully they’re not completely random so you don’t end up with dupes).

In total that’s about $70, on top of the $70 or so you’ve already spent on the base system if you’re lucky enough to get it on sale. And that doesn’t even count having a phone or tablet to play it with using the linked app (though it does support most recent devices iOS and Android). Like most hobbies involving plastic, this isn’t a cheap venture, and it depends on how excited you are to tool around with the system on your own as well as dusting it off for a few rounds at friendly gatherings.

There’s always the chance series 1 packs will discount now that series 2 is around the corner, but given the lack of interest in the system so far we’re worried they might become rare items sooner rather than later. If you’re into the idea of being a DJ without any of the requisite ability or training, this is a much closer approximation than DJ Hero was, so do yourself a favor and pick up a DropMix today.