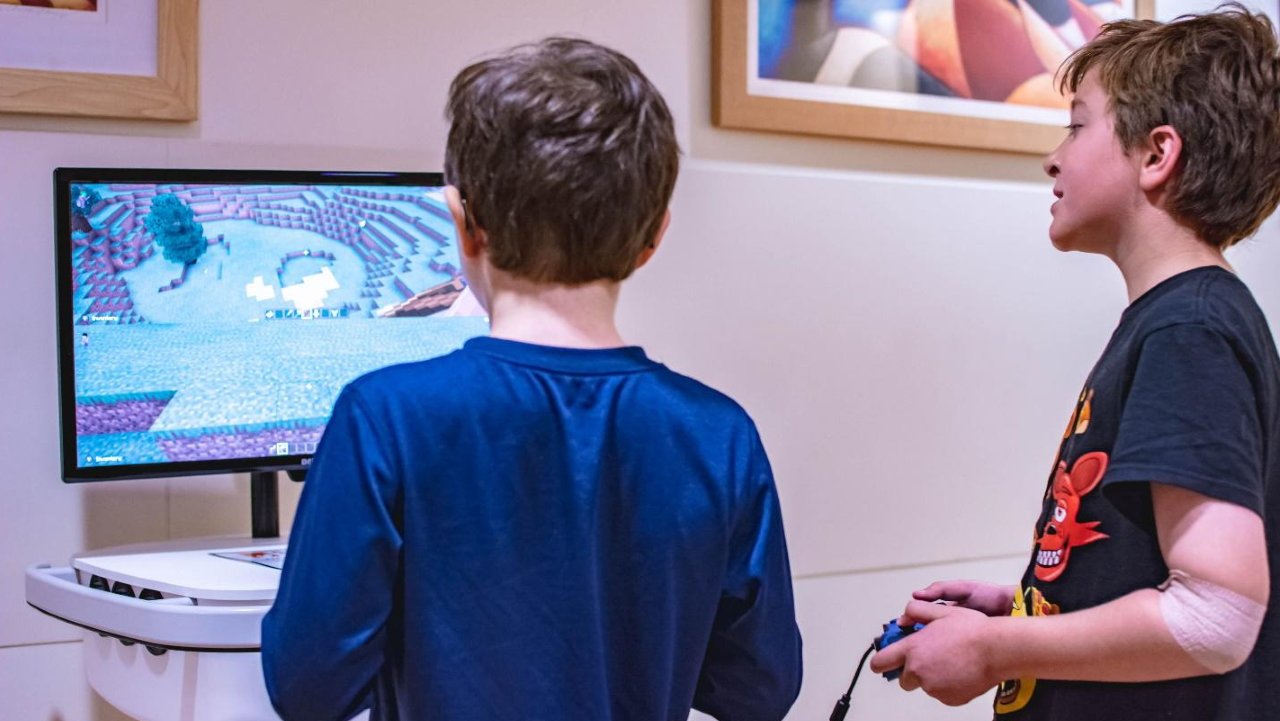 Zach Wigal is a man who believes in the good that gaming can do. Founder of charity organization Gamers Outreach, he, along with his team, help brighten the lives of children in over 200 US hospitals through his (and our) favorite pastime: video games. Nominated as a CNN Hero of 2019, Wigal and Gamers Outreach have developed a unique piece of kit called the GO Kart (Gamers Outreach Kart) with an aim to make gaming as accessible and understandable as possible to children in hospitals and the staff who assist them.

We recently had the chance to speak with Wigal about how he came to create Gamers Outreach, the tech they’ve developed and the difference the program has made to children nationwide. This Thanksgiving we’d like to take the time to highlight those using gaming as a force for good, so if you’re motivated by Wigal’s story below, please consider voting for him in CNN’s Hero of the Year poll or donating to Gamers Outreach directly.

From Halo to hero

Gamers Outreach now helps over a million children a year, but as with all personal ventures, things weren’t always as large-scale. Starting from his parent’s basement, midway through his junior year at high school, Wigal initially just wanted to host video game competitions.

“One of the first events I ever tried organizing was a Halo 2 tournament,” Wigal said. “Around 300 people registered to participate. I borrowed TVs and Xbox consoles from friends and secured a rental permit to use my school’s lunchroom.”

As first events go, 300 attendees is a pretty impressive turnout. But sadly, not everyone at the time was so keen on the idea.

“A few days before the event, a local public safety official phoned my school’s superintendent and voiced concerns over the tournament,” described Wigal. “It was his opinion games like Halo were ‘corrupting the mind’s of America’s youth’ and that kids were ‘training themselves to kill’ playing violent video games. He didn’t believe it was appropriate for our school to allow a video game tournament like mine, and his influence caused our superintendent to revoke the permit I had been granted.

Video games have grown to become a more accepted pastime for kids through the years, but anyone who grew up during endless anti-gaming tirades from the likes of lawyer Jack Thompson in the ‘90s and 2000s will be able to sympathize. Wigal, however, was undeterred.

“I was frustrated by the negative stereotypes around games and the gaming community,” Wigal continued,  “so I organized a charity event hoping we could demonstrate the positive things gamers are capable of when we come together around our passion. That event was called Gamers for Giving, and I formed Gamers Outreach to help facilitate the fundraiser. I had never been involved in a charitable cause, but after seeing the impact of our event, it became clear philanthropy was something I wanted to prioritize for the rest of my life.

"I decided to continue Gamers Outreach because I felt it was doing good for people, and I believed it was a positive conduit for the gaming community.”

Gamers for Giving has since grown into a huge, weekend-long LAN, partnering with the likes of Twitch, Asus and 343 Industries in the name of charity. Through events like this, Wigal and his team have been able to fund their work on Gamers Outreach, allowing children in hospitals to enjoy the same level of escapism as they do.

“I believe play is core to the human experience, and it’s clear video games make a tremendous impact in hospitals,” said Wigal. “It’s often difficult for healthcare facilities to prioritize upgrading and maintaining entertainment devices. Unfortunately, that means people receiving frequent or long-term treatment are disengaged from recreation and physical activities. That’s where we come in.”

A core drive behind Gamers Outreach was to make the equipment they supply as easy to use as possible. This led to the creation of the GO Kart, a bespoke gaming station that doesn’t feel out of place in a hospital environment.

“Our original GO Karts were built by repurposing existing medical kiosks,” Wigal explained. “As we started constructing more units, we needed to create a device that was fully customized for our intent, functionally and aesthetically. For our purpose, medical-grade refers to a handful of design priorities including durability, cleaning ease, and security. We also use certain healthcare-approved components to ensure the GO Kart adheres to hospital preferences.”

#TuesdayThoughts: if you build a GO Kart, will they ?

Yes ! In fact they help over 1.1 million gamers in hospitals each year.

Adapting and improving the GO Kart design has been an ongoing process throughout Gamers Outreach’s twelve years of operation. But the results have been worth it, with hospitals and staff resoundingly open to the concept.

“Some of our greatest advocates have been staff within hospitals,” said Wigal. “We recently received a report from a healthcare worker who was supporting a patient who had a severe burn. The child was having a difficult time completing standing-exercises intended to assist with recovery. The staff working with this child introduced our GO Kart, and having access to video games helped the patient not only complete his exercise but stand three times as long. Games can act as an incentive and a distraction, assisting with recovery. That’s pretty powerful!”

Inspiring the next generation

Providing hospitalized children with the chance to escape into the worlds of Minecraft, Rocket League and Lego games has proven so popular that, on several occasions, the children themselves have raised further funds to make sure no one at their local hospital has to miss out.

“The first time this happened was at Children's Hospital Oakland where a child had been undergoing care for a number of months. He was frustrated that he had to wait each day to play on their single GO Kart. He started fundraising and ended up building a small fleet to share with the other kids. His parents were so proud to see him engaged with our cause, and it was inspiring knowing a child found so much value in our work that he wanted to get involved.”

The work of Gamers Outreach is encouraging to many, and recently it’s led to CNN nominating Wigal as one of their Top 10 CNN Heroes of 2019.

“Being named a CNN Hero is a tremendous honor and a testament to the work done by the gaming community. Of course, if you ask me, the real heroes are the kids and families going through hospitalization – as well as the incredible staff who provide care within hospitals.

“That said, this is a wonderful moment for us to share the good that games and gamers are doing in people’s lives. The video game community has had a tumultuous relationship with mainstream media over the years. I give credit to CNN for inviting us to share a different narrative and recognizing the impact gamers have made in hospitals.”

The nomination acknowledges the work Wigal and his team have done for children countrywide and provides $10k of funding towards Gamers Outreach. It also put Wigal in the running for CNN’s Hero of the Year award which, if won, would supply an additional $100k to the charity. If you’re impressed by everything Wigal and his team have created with Gamers Outreach, head to the CNN Hero of the Year voting page where you can provide up to 10 votes per day until the poll closes on December 3. You can also donate to Gamers Outreach at any time of the year by clicking here.

“If we value positive community sentiment or a sense of altruism, we need to set an example,” Wigal said. “We can take an active role in defining what impact gaming has in the world. Gamers Outreach programs are one of many ways the gaming community can exercise its knowledge to make a tangible difference.”