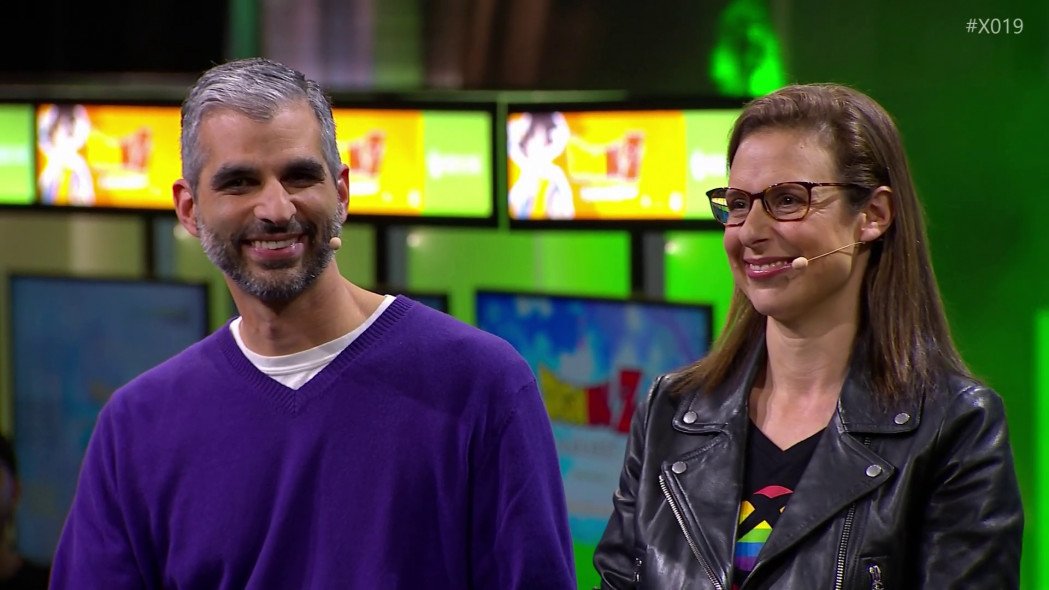 There are 2.6 billion gamers on the planet, Microsoft corporate vice president Kareem Choudhry tells us. "And we know that we're not going to sell 2.6 billion consoles. Nobody is."

That's where the green team's latest venture, Project xCloud comes in. Choudhry, along with the ambitious game streaming service's general manager Catherine Gluckstein, believes the future of the console wars are far more complex than the box-selling antics of the 20th century. The streaming industry, like the internet, is worldwide and you don't have to drop $500 to start gaming on it (not in one go, at least).

"We see streaming as this incredible opportunity to meet that consumer expectation and portability of experience for the customers that we have today, and also use it to expand our market reach for both Microsoft and for our publishing partners," Choudhry says. "To put this content in the hands of consumers that we perhaps aren't reaching today."

We spoke to Choudhry and Gluckstein at Microsoft's annual celebration of its gaming community, X019, where final boss of the Xbox division Phil Spencer announced on stage to hundreds of superfans in London's Copper Box Arena that the Project xCloud preview was expanding. The service, which allows you to instantly stream games over an internet connection from an Azure data center is in beta phase, and will now cover 50 more games and four new regions including Canada, Japan, Western Europe and – most importantly – India. While the service has only been testing on public networks for the past month in the US, UK and South Korea, this expansion shows the true global ambition of an already bold gambit.

"India's a really interesting market, specifically chosen as Kareem talked about the 2.6 billion gamers on the planet, this is about us reaching gamers that have never traditionally been in the Xbox ecosystem," says Gluckstein. "There are about 300 million gamers in India, which is more than the population of the United States – which is a stat that I just like – but it's a huge gaming market so really interesting for us to enter that market and begin testing."

The mobile gaming industry in India has grown from $290 million in 2016 to a projected $1.1 billion next year, according to a report by the National Association of Software and Services Companies (NASSCOM), which monitors India's IT infrastructure. Despite this large and very lucrative gaming population, and due to a number of reasons (including a $150 price bump), the Xbox One has not fared well in the region, with lifetime estimates of around 50,000 units sold compared to Sony's 400,000 PS4 consoles. The 360 managed a stronger showing (thanks in part to bizarre ads like the below) but both pale in comparison to that total number of gamers in the country quoted by Gluckstein, as it turns out they're much more at home on another platform.

"There are a lot of markets in the world that I'll say are smartphone-first-and-only, and the content library we have that runs on our console base and the community that's attached to it, I find it to be very compelling," Choudhry says, referencing India's gigantic mobile gaming industry. "So giving that access to people who really only have a smartphone device I think that's the magic selling point going for [Project xCloud]."

This is where Choudhry and Gluckstein see xCloud's potential, not just as an all-devices, always-available way for you to choose when to play, but yet another funnel to add more gamers to the Xbox ecosystem. Adding support for the DualShock 4 is a neat olive branch to existing console owners, too. And while bringing new customers on board is clearly a solid aim of the service, it is also playing well with the Xbox faithful. Gluckstein mentions that of the games in their early preview – Halo 5, Gears 5, Sea of Thieves and Killer Instinct – they're already seeing Halo players spend a third of their time with the game playing through xCloud.

But creating a system for content and community to interact through a dizzying array of new devices calls for more than just solving lag-free gameplay. Screen sizes, pause states, save game sharing are all nails awaiting a hammer while Microsoft builds an impressive Trojan Horse to introduce the Xbox ecosystem to anyone taken in by the Netflix model of entertainment acquisition.

"We've already changed our SDK and put in what we call our 'is-streaming' APIs, where you can actually query those APIs at runtime and they'll tell the game if they are running in a cloud-streaming environment, so [developers] can make any changes they want," Choudhry explains. "Some of them want to make font sizes bigger if you're on a small screen, things of that nature."

Technical solutions don't just need to be made at the development end either, because of course sending input data and high-definition graphics potentially hundreds of miles at sub-light speeds is going to cause some latency issues. But ironically one of the bugs the team squashed during the preview phase of Project xCloud was the result of a game experiencing particularly low latency.

"We have a lot of anti-cheat detection on [Xbox Live]," Choudhry explains, having previously helped manage the online multiplayer service. "It's very important to preserve the integrity of the experience, but the anti-cheat detection was firing on some of the consoles that were in the Project xCloud preview. These are consoles that are housed in the data center, so we started debugging to find out why. Turns out those consoles had zero millisecond ping times to the multiplayer servers that were sitting in the same data center, and never before was that a valid scenario."

Project xCloud is also breaking down multiplayer barriers in other interesting ways that the team hadn't anticipated. Choudhry spoke of how players have sent feedback that they've turned Sea of Thieves, Rare's pirate adventure, into a couch co-op game with one player streaming to a mobile device while the other plays on console or PC. Also, endearingly, about 20% of feedback they receive are just love notes to the xCloud dev team from players excited to be able to live out these futuristic dreams.

The service currently targets 10Mbit/s as a stable connection speed for gaming, though part of the function of this preview is working out where on what Choudhry calls 'the golden triangle' of video quality, bandwidth and latency they should sit. This is in collaboration with a number of telecommunications companies across the early test regions, which apparently involves some two-way adjustments of the network to assist xCloud's performance.

"We're specifically partnering with SK telecom in South Korea, Vodafone here in the UK and T-Mobile in the US, and we're having these deep learnings, how should they configure their pipes such that our traffic behaves in a way that we expect it," Choudhry says. "The quest we're on together is a great and consistent connection between a Microsoft Azure data center and their customer. We're using Project xCloud as a really good sled to figure that out."

With so much world-building tech, like Microsoft's Azure data centers and telecomms interchanges, just so you can sail across an ocean and barf in a friend's face, there's understandably some concern about sustainability. Graphics cards and processors are notoriously power-hungry beasts, however surprisingly on a per-player basis Project xCloud could work out as being a greener way to game.

"Working in the console space for years, we worked incredibly hard on energy consumption on the console itself, and because we have a different design point in the data center we've actually been able to make the hardware more energy efficient than in the home," Choudhry says. "When we design a console for in the home, it comes in a consumer electronic device. I have to design for the cat going and laying on it, for a toddler spilling something on top of it, there's acoustic requirements, there's all kinds of things that we have to operate within. And in a data center we have a different set of requirements that actually enables us to be more more energy efficient."

Project xCloud's expansion into new territories, a roadmap for even further expansion in the next year, and a raft of new games to try out on the service all came torrentially flooding down on the parade of Google Stadia's launch this week. A quiet lead up to the search giant's first significant foray into gaming has been already dampened by a lack of launch features and titles while xCloud continues to slowly widen its doors in line with the growth of its data center backbone, Azure. Choudhry and Gluckstein made no allusion to their rivals' impending moves in the same lane, but the message from Choudhry was clear: "It's more important for us to get this experience right than to rush something out before we feel like we know what it is that consumers actually want. It's been a good journey."

Project xCloud is in preview phase now with signups open to those in the UK, US and South Korea. It will soon be open to Canada, Japan, India and select Western European countries.