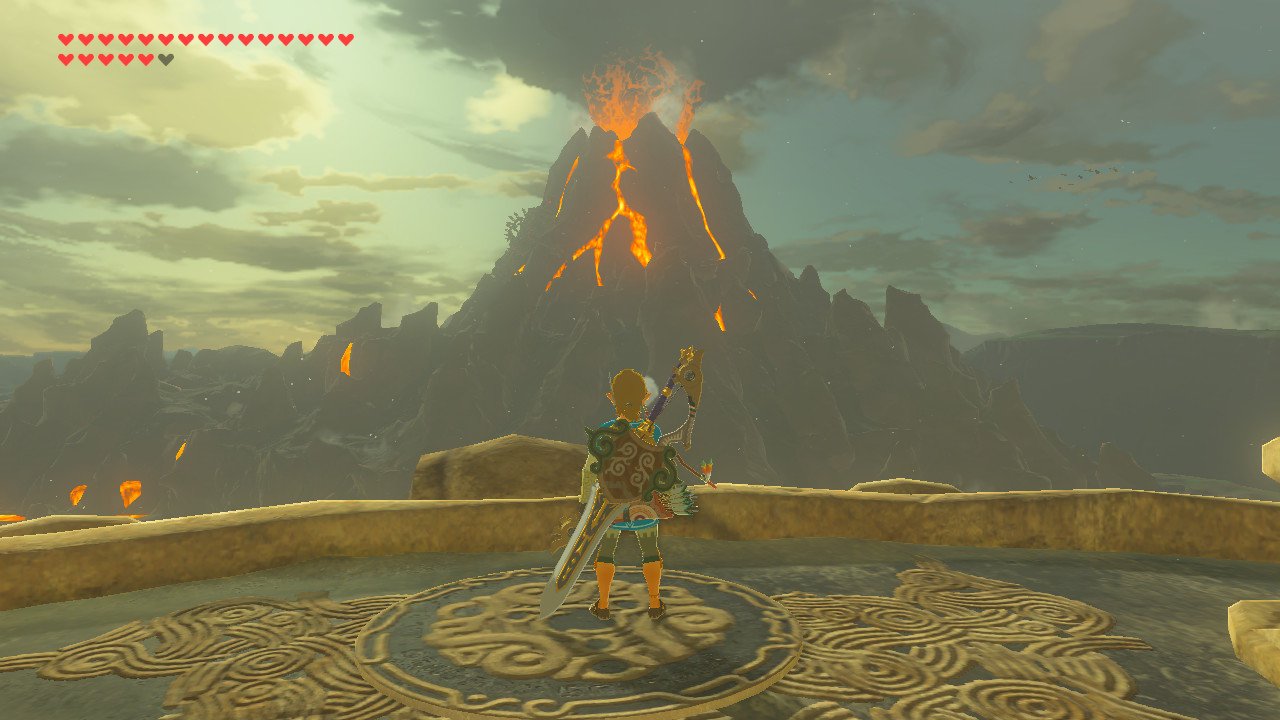 If you’re as enraptured by Breath of the Wild as we are, your explorations might have sent you on the hunt for Goron City and toward the imposing Death Mountain. Heading this way unprepared can put you in a spot of a hot bother however — and we’re talking flaming hot! To avoid catching your death of, well, flames, you’ll need some flame resistant gear or potions when exploring the Eldin Region.  Here’s everything you need to know about Heat Resistance, and how to reach Goron City and Death Mountain.

Gain access to Gerudo Town's Secret Club with our guide.

Before you make your way towards Goron City, You’ll want to make sure you’ve reached the Eldin Tower to unlock the world map. As you make your way in that direction, you should run across Foothill Stable next to the Mo’a Keet shrine (it’s southwest of the Akkala tower). Speak to Gaile outside by the cooking pot and she’ll offer to sell you up to three Fireproof Elixirs which will provide heat resistance for four minutes and twenty seconds. You can make these elixirs yourself using a Fireproof Lizard, but you’re not likely to find them outside of the Eldin region so it’s worth snapping up all three here.

If you need to make further potions along the way, simply combine a Fireproof Lizard with up to four monster parts and throw them into a cooking pot. The more monster parts you use, the longer the elixir will last.

Once you’re loaded with heat resistant elixirs, you can make your way into the towards Eldin Tower and Goron City. Simply take the northern path from Foothill stable and you’ll soon reach the tower at the southern end of the mountain. Don’t use any elixirs yet, as you won’t need them until after the Tower. Once you’ve unlocked the region map, head back to the main road to the northwest and chug your first potion. It’ll be pretty clear once you’re in the danger zone, as Link will start to take damage start smoking. Make sure to put away and wooden weapons as using them here will cause them to catch fire!

If you bought all three elixirs you should have enough time to visit Qua Raym shrine which can be found in the lava stream to the left of the road. If you’ve only got the one, it’s best to mark it on your map and head back later. Following the road north you’ll stumble into the Southern Mine. The Gorons here are fun to chat to, but make sure you talk to the only Hylian, Kima, who’s sitting on the ground to the left. He’ll challenge you to collect ten fireproof lizards, a quest well worth completing as he’ll hand over a piece of Flamebreaker armor which will gives level one heat resistance and stops you from catching fire, the same as the elixirs that Gaile sells. Make sure you’re sneaking, and the quest should be a breeze.

Head further north and an eruption will occur, forcing you to take cover under overhanging rocks, make it past this and you’ll reach Goron City. Head straight along the main path in front of the city until you reach a small bridge. Turn right before it and enter the first store, Ripped and Shredded. In here you’ll be able to purchase the remaining parts of the Flamebreaker set (and the body piece too if you skipped Kima’s quest). To progress further up Death Mountain requires level two heat resistance, so you’ll either need to wear one piece of Flamebreaker Armor and drink elixirs, or purchase the remainder of the set here. If you’re short on rupees, the Southern Mine and surrounding areas are rich in ore deposits you can bomb to get valuable gems.

Goron City is rife with quests to complete, but you’ll need to scale Death Mountain if you want to conquer Divine Beast Vah Rudania. Speak to the Goron chieftan and he’ll set you on the right path, as you’ll need to rescue Daruk’s decendant Yunobo before you progress. Death Mountain can be approached by heading east from Goron City, circling up and around behind the town itself. Along the way you’ll find another shrine to complete before reaching the Bridge of Eldin. With your heat proof gear and elixirs, you should be more than ready to tackle the Divine Beast and explore the rest of Eldin.