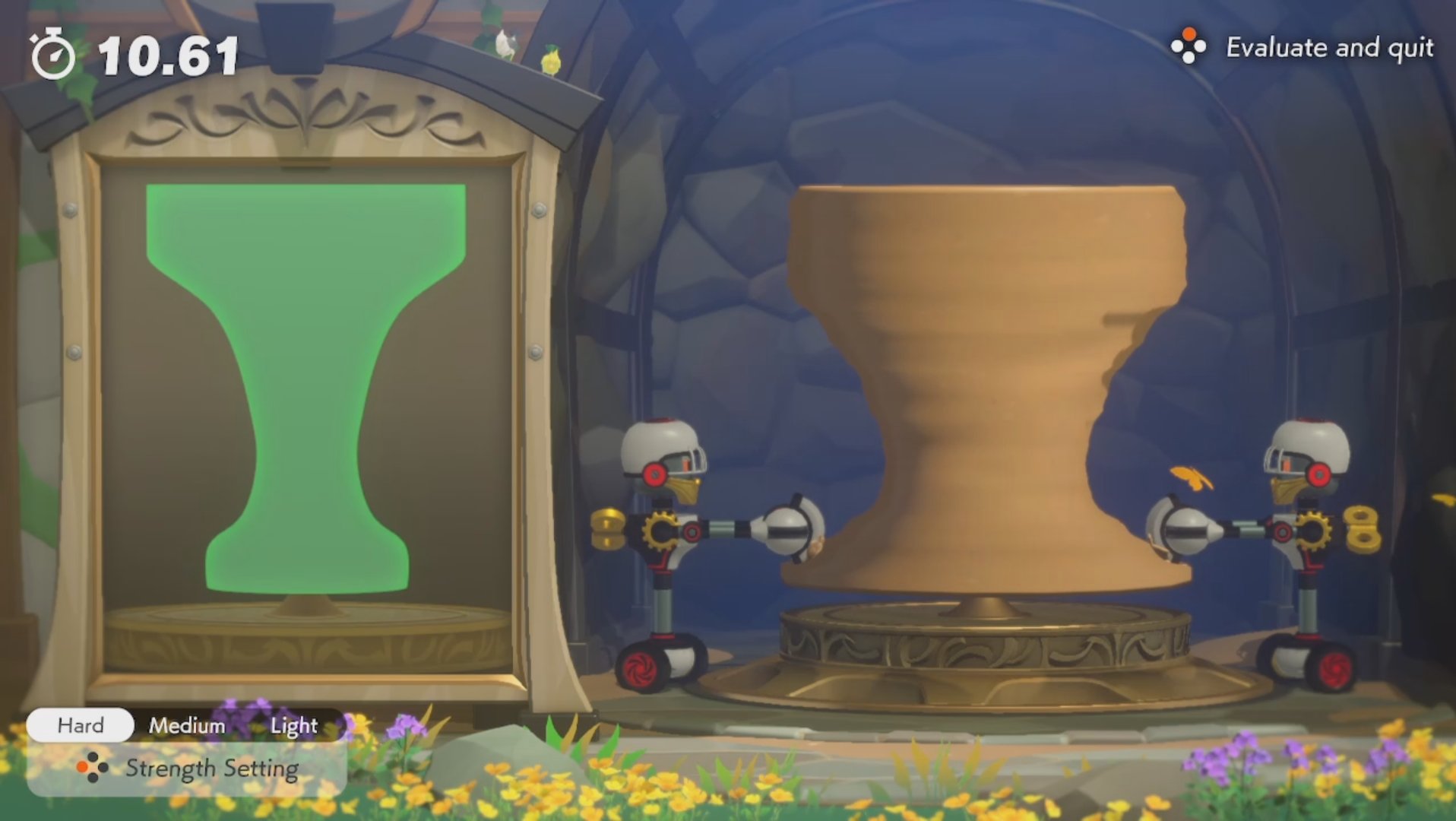 “Become a master potter and also a master squatter!” Ring Fit Adventure gleefully declared as I scanned through its list of minigames. Molding pottery while working my thighs, all without risk of making mess? How hard could it be!

From what I can tell, Squattery Wheel exists only as a torture device. Perhaps one created solely for me.

I should start by pointing out that I don’t hate squats. In fact, I rather quite like them. Squat holds, squat lunges and squat jumps are all enjoyable — okay, maybe not squat jumps — parts of an exercise routine. Having smashed the Squat Goals minigame with an immediate S-Rank, I was feeling pretty confident about my ceramic-carving chances.

Starting the mini-game, however, I quickly realized my mistake. You see, Squattery Wheel asks you to do a lot more than just get low. With the aim of matching the figure shown on the left, you squeeze in on the ring con to press in the clay, squatting to adjust the height of the molding arms. Squeeze harder to squish further, squat lower to approach the bottom. On paper? Simple. In practice? Excruciating.

It turns out that holding a steady position halfway through a squat is far from easy, and the Joy-Con is more than sensitive enough to show just how unstable you really are. And that’s before you even begin to factor in squeezing the Ring-Con. In a rare case of unwanted realism (or perhaps a moment of Machiavellian genius), pressing in on the clay in one area pushes it outward, re-filling the areas you’ve just perfected above and below.

What results is an awkward dance of jiggling up and down (much to the amusement of anyone watching), desperately trying to coax the clay into behaving. Did I mention that it’s also timed? With just a minute or so to perfect your creation, it only takes a single slip up, one errant twitch of the Ring-Con, and your masterpiece is ruined.

But you do it. You finish. And as the flames cast your wobbly creation into solidity, you might even be feeling a little bit proud. WRONG, cries Squattery Wheel once more, slapping your clay child from your hands. Your output is worthless. Because what we haven't mentioned yet, is that the scoring system is also complete and utter BS. Instead of recognizing an attempt at the mimicking the general shape, Squattery Wheel takes the sensible (read: cruel) scoring approach of merely checking how close you were at any point to the lines of the diagram, regardless of the overall shape. As it happens, I am not very good at this.

Squattery Wheel has taught me that I’m a terrible judge of size, producing what can only be described as fat pottery over and over again. I’ve spent an embarrassing amount of time desperately shimmying up and down, growing redder through a mix of anger and strain as I strive, sweat and plead for an even halfway decent score. If you’re playing well, Ring Fit’s minigames regularly score you thousands of points. To this date, the highest score I’ve obtained in Squattery Wheel is 12.

I hate you, Squattery Wheel. But thighs be damned I'll be back for that high score.