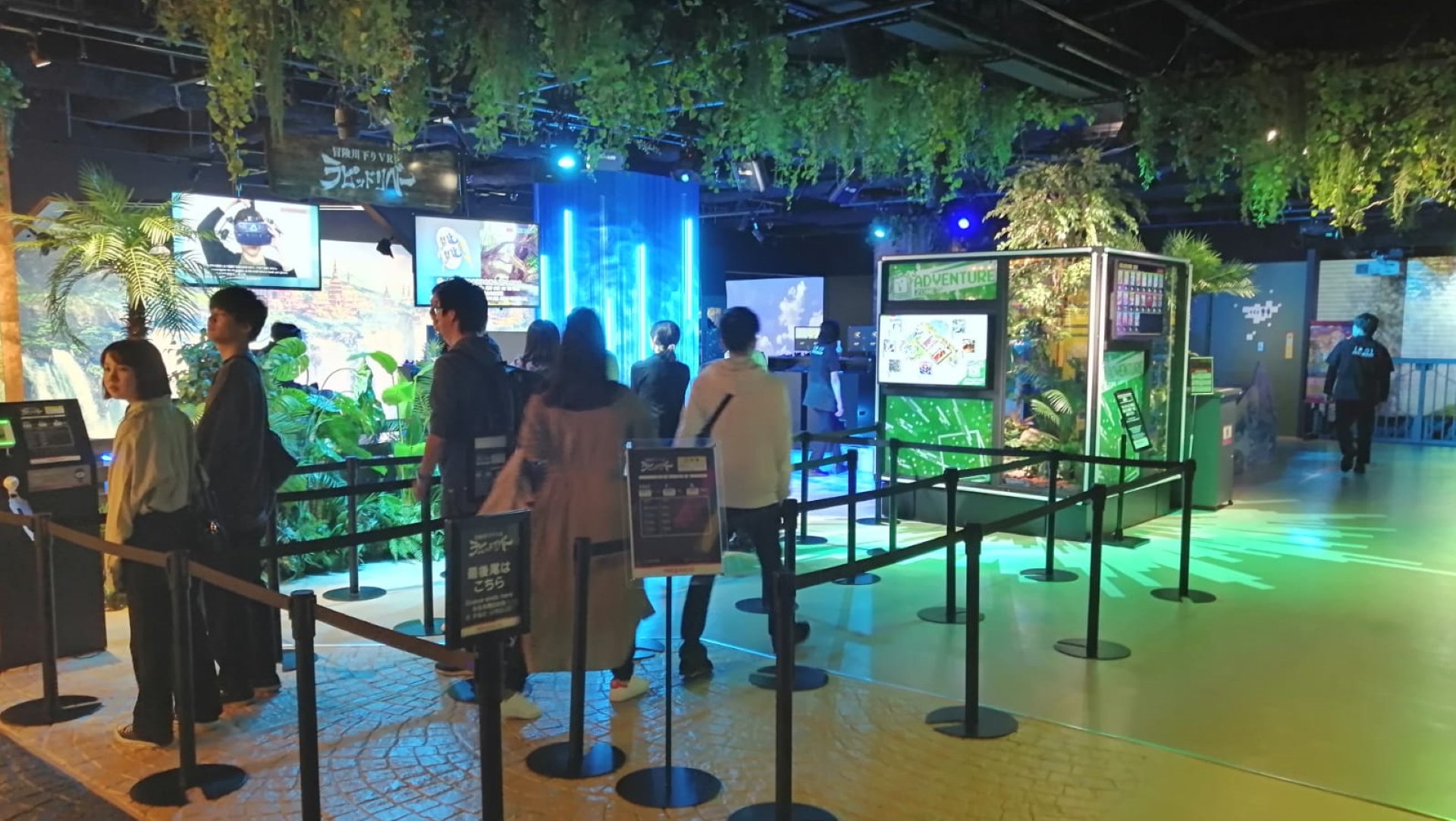 What does VR mean to you? Here in the West — especially in gaming circles — we tend to think of the PSVR, Oculus and Vive headsets as home entertainments, albeit expensive ones. VR experiences such as escape rooms have begun to make appearances in a few select locations, but the industry is still in its infancy and remains an expensive one. Take a trip to Japan, however, and you’ll find things are markedly different.

Thanks to the work of Typhoon Hagibis, we recently found ourselves stuck in Tokyo for a couple of unplanned days. What better way to spend them then, than by trying out the best VR centers the city has to offer? We visited both VR Park Tokyo Shibuya and Mazaria to try our virtual hands at several spectacular games and experiences.

Situated on the top floor of an arcade in the center of one of Tokyo’s busiest districts, VR Park Toyko Shibuya offers an amusing mix of eight VR experiences and games. VR Trolley Coaster saw us sit in a rocking mechanical cart as we hurtled along a virtual jungle track, while Mu VR challenged four of us at a table to snap the best image of spooky aliens and beasts as they scuttled around us.

Unfortunately, the quality of games on offer here was a mixed bag, with the hack and slash wave defense of Circle of Saviours feeling like little more than a hastily thrown together test demo. The highlight was definitely Kaiji VR, a solo game which involved edging across a precarious steel beam between two skyscrapers. It’s a title available for purchase at home, but acting it out in real life on a wobbly wooden plank brings an entirely new layer of fear to an already tense challenge.

With several other attendees, we weren’t able to complete all of the games on offer at VR Park Shibuya during our allotted time, but we’re pretty sure you could bounce through them all in a less busy period. That said, we’d highly recommend spending your yen on our next port of call instead...

The real gem in Japan’s VR crown. If you’re willing to splash out the extra cost of entry, a trip to Bandai Namco’s Mazaria in Ikebukuro is an experience like no other. Set up like a regular theme park, complete with thematic horror, festival and adventure zones, Mazaria is packed to the brim with queue-to-play VR games containing bespoke equipment.

The range on display here is frankly staggering, with everything from skiing machines to Evangelion cockpits. One passport ticket gets you entry to the entire park until 10pm (barring two additionally priced experiences), which leaves more than enough time to drive yourself nauseous from VR overexposure.

After grabbing our tickets, we eagerly hopped in line for our most anticipated attraction, Mario Kart VR, and oh boy, you have got to try it. As long term fans of Mario Kart, it was safe to say that jumping into the body of Mario, Luigi, Peach or Yoshi was an absolute blast. By sticking Vive Trackers to straps around your hands, you can reach up and grab items mid-race, physically hurling shells and bananas at your opponents, or attempting to thwack them with a hammer. It’s smart use of the tech, and undeniably the best attraction on offer.

That’s not to say everything else on show was a disappointment; we spent a good seven hours at the VR park, and only two games out of the ten pluis we tried felt lacking. Other highlights included bashing through the flying notes of the Can Can in TaikoVR, headshotting zombies in the unsettling Hard Call, and taking a relaxing ride through the skies in Hanechari, the Winged Bicycle.

What stood out most at Mazaria was the investment in convincing VR tech, and smart use of the Vive Tracker add ons. Actuated machines made experiences like downhill skiing or piloting a mech uniquely immersive, while carefully positioned trackers let games incorporate unconventional controls like paddling through river rapids with an oar. There’s much here that you simply couldn’t achieve at home, and even those who suffer from VR motion sickness will feel comfortable thanks to physical machines mirroring their in-game motions.

In short, if you have the chance to visit Tokyo then we highly recommend visiting Mazaria VR Park, especially with a group of friends. There were plenty of couples and families making the rounds during our visit, and it showed how localized parks like this can help broaden the appeal of VR beyond the niche market of gamers willing to invest hundreds for their own kit. There’s no telling when or even if this kind of experience will come to the West, but you can be sure we’ll check it out if it does. Until then, there’s always Tokyo.