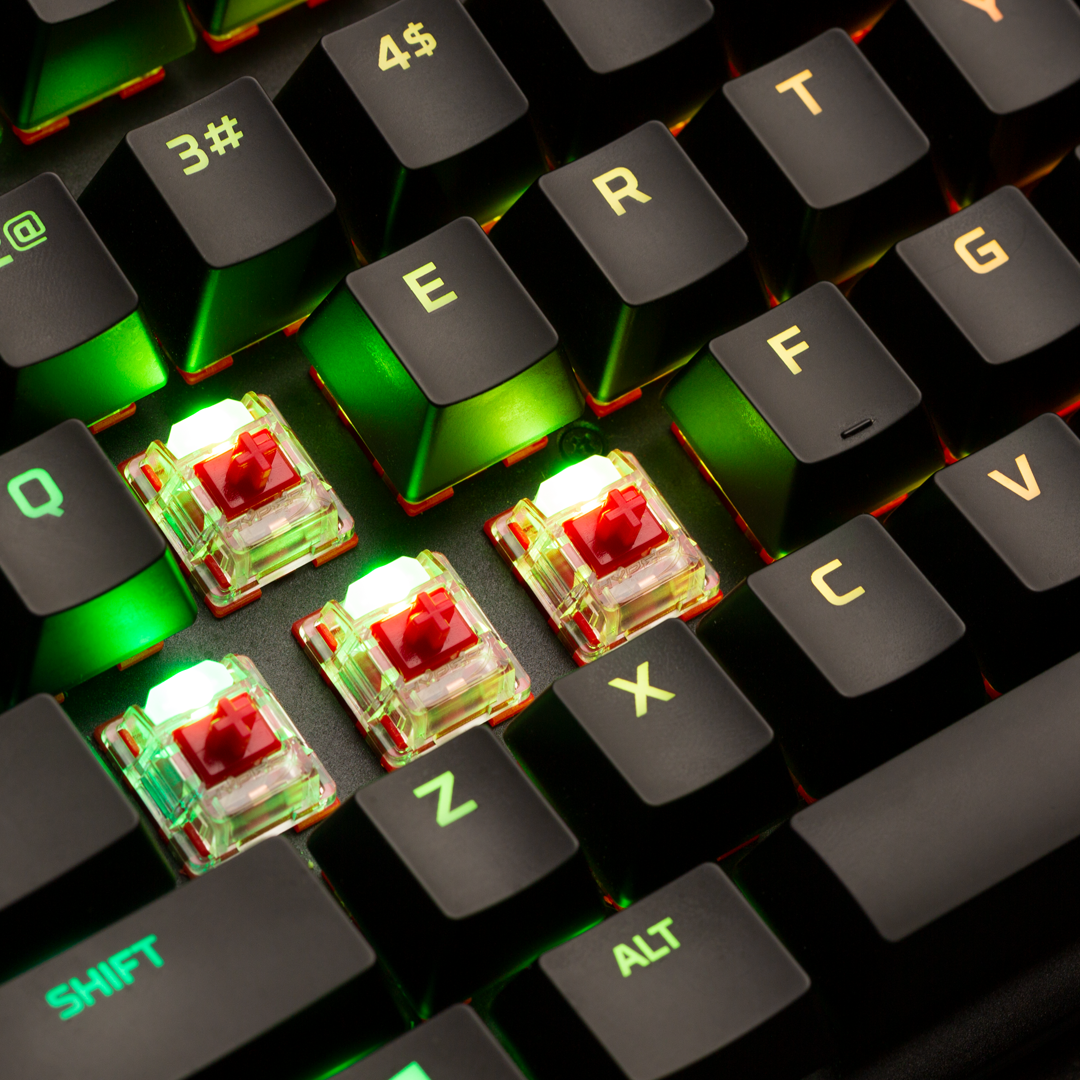 The evolution of mechanical key switches

"When we set out to develop the HyperX Switch, the goal was never to re-invent the mechanical switch technology," says Albert Jin, product manager at HyperX. Albert oversaw the engineering that went into producing the new line of HyperX Switches, the key interface of the new Alloy Origins keyboard. "We simply focused on the key feeling that users want, and tuned it to the most optimal specification that is most accepted in terms of force and actuation speed."

As with the wheel, re-invention at this stage of the mechanical key switch's lifecycle is all but impossible. As the first keyboards were really just converted electronic typewriters, the mechanical key switch has been around since computers had screens. In the early '70s devices such as the Alps SCB1A163 – used in the first computer built at UCLA – began to resemble what we type and game on today.

The Alps keyboard, built by the company that went on to make all of Apple Computer's keyboards, featured mechanical reed switches which used magnets in the keys to connect two metallic contacts inside a hermetically sealed tube. Due to the lack of physical contact in the mechanism, these types of switches will last for hundreds of millions of presses compared to the already monstrous 80 million keypresses HyperX's new switches are tested to.

However, as with all manufacturing, cost has a huge impact when producing at scale. Not everyone could afford expensive switch housings using the magic of magnets, and even those produced later in the '70s, utilizing mechanical technologies like Beam Spring switches, could cost thousands of dollars. The IBM 3276 was one such keyboard, with key switches featuring a capacitative touch pad at the bottom of the key to complete the circuit. The downside: a $1,500 price tag, which in today's money is around $8,000. Not one to take to a LAN party.

Towards the end of the 1970s, Cherry switches began to appear in mechanical keyboards, such as that built into the UDS Comtest CEX-17C. And in 1981 IBM released the Model F, which used a buckling spring mechanism and standardized the 101-key US keyboard layout. A few short years later, 1984's Cherry MX Black introduced the linear switch design of a springed key pillar pushing together an electical contact in its lower housing, and that has remained popular with gamers ever since. However, while the heavy weighting was perfect for RTS gamers to prevent accidental keystrokes during frantic macros, not everyone feels comfortable with a linear key. Mechanical switches diversified into linear, clicky and tactile.

"Mechanical switches are all about feeling," says Jin. "Mechanical keyboard enthusiasts are ultra picky when it comes to finding the feel that is just right for them. Most of the time, industry standard manufacturers do not have these options available."

In previous HyperX keyboards, Jin and the team have used a variety of switch manufacturers to offer those options to players. Starting with the Alloy FPS in 2016, targeting first-person shooter fans with a compact keyboard offering Red, Blue and Brown Cherry MX keys. However, the next year the team also experimented with keyboards using alternative manufacturers, including Outemu and Kailh in 2018's HyperX Alloy FPS RGB.

"We partnered with Kailh to tackle the mid-tier price range keyboard," Jin says. "It was a solution for our customers who do not care too much about switch brand, but simply wanted a mechanical keyboard with good RGB lighting. In order to offer this feature aside from Cherry, we utilized Kailh’s ultra fast Silver Speed switch which allowed us to introduce DIP LED lighting as well, to emphasize stronger lighting performance."

While the Kailh's actuation speed is incredibly fast and well-suited to FPS games, the lack of customization offered by multiple switch types limits the options available to gamers. And looking at their own options, the HyperX team saw that there was only one way to give gamers the combination of features they wanted to see in a keyboard: build their own.

"The main advantage of doing our own switch design is being able to customize the feel of the switch, down to the gritty details of when the tactile feeling occurs or how smooth the linear press is," Jin says. "Another advantage is the quality can be controlled to the highest standard. HyperX stands behind producing performance products, so no corners are cut in validating HyperX switches."

While giving Jin and the team ultimate control over every aspect of the keyboard, taking that control came with its own set of challenges. "Getting the right balance of force and travel was probably the most challenging part during the testing and development process," Jin says. "The HyperX switch is a faster actuation compared with traditional mechanical switches, to give you a gaming advantage, but not so sensitive where you may misclick on a standard speed switch. The actuation force is not too heavy to prevent finger fatigue and helps prolonged your gaming session, it has been tested and approved by hundreds of gamers across the world before we concluded this switch is truly designed for gamers in mind."

Another advantage of building switches from scratch is that any other features Jin and the team wanted to incorporate into the keyboard's overall design could be accounted for at the switch-building stage. One beautiful result of this design philosophy is the cornucopia of colors your fingers bathe in when using the Alloy Origins.

"Unlike many switches which are SMD LED [surface-mounted diode, the LED position is hidden underneath the switch housing], HyperX switch incorporate exposed DIP LEDs in the design to maximize the lumens being outputed," says Jin. "Most keyboard manufacturers these days utilize SMD-style LED design because it’s a cheaper manufacturing process in order to increase profit margin. HyperX did not want manufacturing process to be a limitation to give users a more vibrant keyboard, so we invested into this area and automated the DIP LED assembly line. It’s a win-win for us and our customers, and isn’t it gorgeous?"

Compared side-by-side with SMD LEDs, the Alloy Origins is practically blinding. DIP LEDs are mounted higher on the switch housing, letting out even more light from beneath the keycaps above. For many mechanical keyboard enthusiasts, on top of the feel of the switch itself the allure is customizing the look of their workstation, be that with RGB lighting profiles or with specialist keycaps. This is also something Jin's team at HyperX has aimed to cater for.

"To utilize DIP LED to its full capacity, we took lighting to the next level by offering “Pudding Style” keycaps," Jin says. "The brighter DIP LED on the HyperX switch makes this the perfect pairing!" The "Pudding Style" caps feature a translucent sidewall, letting the light from those exposed DIP LEDs shine out even brighter than before.

Whether it's the way the keyboards look or the feel of the keys, the history of mechanical keyboards and their evolution over time has forced makers to think outside of the box. And in some cases, underneath the keys.