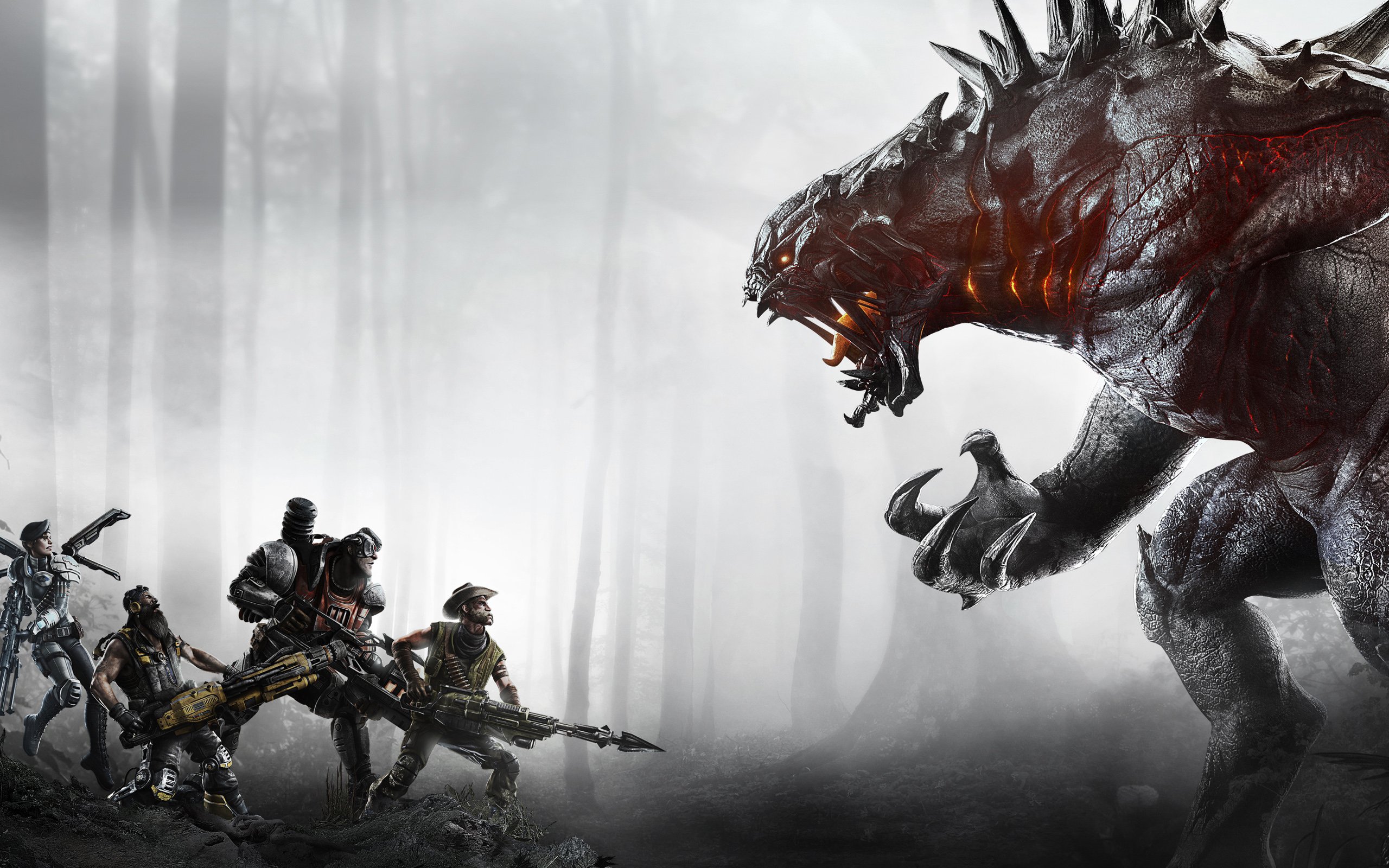 Standing Trial is a new series of features by the AllGamers team, where Henry, Morgan, and Chris choose a spectacular failure from gaming’s past and unpick what went wrong. As one of us represents the game’s defense, the other two act as judges, jury and – in the event the defense fails – executioners.

Evolve started out life as a promising gust of fresh air, poised to breathe life back into the lungs of co-opetition. In the period just after Left 4 Dead 2 and Natural Selection’s heyday, but before Dead By Daylight, asymmetric multiplayer was one of those perfect-on-paper sort of game pitches for Evolve. A monster that’s trying to farm its way up the food chain until it’s big enough to eat its pursuers? That’s game design gold dust. But the reality soured like milk in the mouth. We at team AllGamers are here to examine how this happened, and whether Evolve deserves its unenviable place in history. Your defense for today's trial is Henry Stenhouse, PhD.

My esteemed jury, we stand before you today to argue the case of Evolve, a multiplayer title before its time, wrongfully prosecuted for crimes beyond its control. Too long has Evolve suffered as a pariah of the gaming world. It’s time to infiltrate the high-security gaming prison, secure a keycard, and finally release this poor, underappreciated title from incarceration.

When Evolve launched back in 2015 – nay, before it even reached release – it was charged with three gaming crimes: the sinful greed of microtransactions, the unforgivable absence of a single-player story, and a parsimonious attitude to launch day content. We shall address each of these points below before presenting a final, definitive argument.

I will begin by stating that I am not here to defend the overzealous use of microtransactions. Evolve launched with far too much available for purchase in a full-price release. Instead, I would draw attention to the sheer hypocrisy of the jury of the time. Four years ago, the gaming world was a markedly different one to that of today, with the Battle Royale craze still two years away. Before Evolve had even released, gamers and content creators of the day had already begun to complain loudly about the outrage of charging $3 for a skin, or $7.50 for new characters after launch, whipping up a frenzy of rabid anger.

These same players would, within a matter of years, begin emptying their bank accounts for loot boxes, a new Fortnite skin or addition to the Apex Legends roster. Season passes, new characters and cosmetics are all standard fare for multiplayer these days, whether the game released at a premium price or not. Evolve even went on to restructure itself with a free launch, but by then it was too late. The pyre had surged alight and no amount of water could douse its raging flames. Evolve’s DLC system was wrong, but by today’s standards it was hardly the worst offender.

We turn to the case of the missing single player, and here we see a clear example of changing times once more. These days, 4v1 is in vogue. Friday the 13th and Dead by Daylight both saw success, with the latter even receiving a tie-in with Stranger Things. Looking ahead, Predator: Hunting Grounds and Project Resistance are on the horizon. These games have no need for single player, nor is it a core complaint. We would make the case that the same was true of Evolve back in its day, only the world wasn’t ready.

To say that Evolve had no story, however, is a grave misconception. Turtle Rock Studios seeded the world’s history into excellent incidental dialogue. Different combinations of hunters resulted in new tidbits of knowledge being gleaned, encouraging you to try new teams with each hunt. It’s a similar kind of teasing, easter egg process that games like Overwatch and Apex use to relay the history or future of their worlds, and players these days lap it up, gleefully awaiting the next hint towards a future update.

And so we come to content, and it’s here that we concede Evolve was lacking for its price tag. However, instead of suggesting Evolve should have had more, we believe it should have cost less. Had Evolve released today, it almost certainly would have done so as a free-to-play title. Had that been the case, we doubt many would have found fault with its model of support. As it was, a launch with three monsters, and three hunters in each class was by no means dire, but felt overshadowed by a barrage of advertisements for pre-order bonuses, season pass hunters and cosmetic skins.

In an age of of Call of Duty copycats, Evolve tried something different. Yes, it had problems: few players wanted to be the monster, leading to long wait times; the hunters required far more coordination than a matchmade band could muster; and tutorials were limited, leaving new players to scramble with the punishing combat.

Despite all of that, Evolve is one of the few games to truly nail the kaiju experience, and tracking provided unique tension as you closed the net on your deadly prey. Turtle Rock was also unusually open, responding daily to feedback on the game’s forum and regularly sharing progress on future updates.

Finally, I would like the jury to recall another fateful game released back in 2015. Ubisoft’s Rainbow Six Siege shared many of the initial faults of Evolve, but today it stands proud after four years as one of the most impressive examples of games as a service available.

Had Evolve not suffered such a severe pre-launch backlash, had its marketing not focussed on DLC, season passes and an ill-advised esports push, had it been given the time to develop and — for lack of a better term — evolve, well, we can only dream of what stage this beautiful monster may have reached were it still around today. I say to you that Evolve has suffered enough. Recognize this bruised monster for having tried, and allow it to rest in peace.

The defense rests its case.

Morgan: Evolve had a lot of potential when it launched, and I agree with the Defense that it attempted to do something different in an era where every game wanted to be the next best first-person shooter. The Defense brought up some of the main issues damning Evolve, namely its disappointing overuse of microtransactions.

Pair these with the launch price, and you get a phenomenal core game marred by a series of bad publishing decisions. After reviewing the Defense’s statements, we have no other option but to concur that Evolve was a good game doomed to failure by corporate greed. The game itself could have been so much more than it was given the chance to be.

Chris: Evolve’s failure really pained me as some of my favorite multiplayer experiences have been on uneven battlefields. As Henry points out, Siege’s continued survival in the same arena suggests that it really wasn’t the format of the game that let it down, which leaves us with that wild economy it released in. Siege itself struggled with the pay-per-operator model, but with the right support it's steadily dug its niche. Even now, four years on, games fly too close to the sun with DLC and microtransactions propping up an otherwise simple concept. That and shoutcasting during E3 demos pretty much dug the grave for Evolve.

About the best thing we can do for Evolve is let it slide out of view, quietly, with a sentence of time served. Perhaps, in another couple of years, a small studio will pick up what Turtle Rock were putting down and there’ll be a spiritual successor. And maybe that will only have a battle pass of cosmetics to contend with.