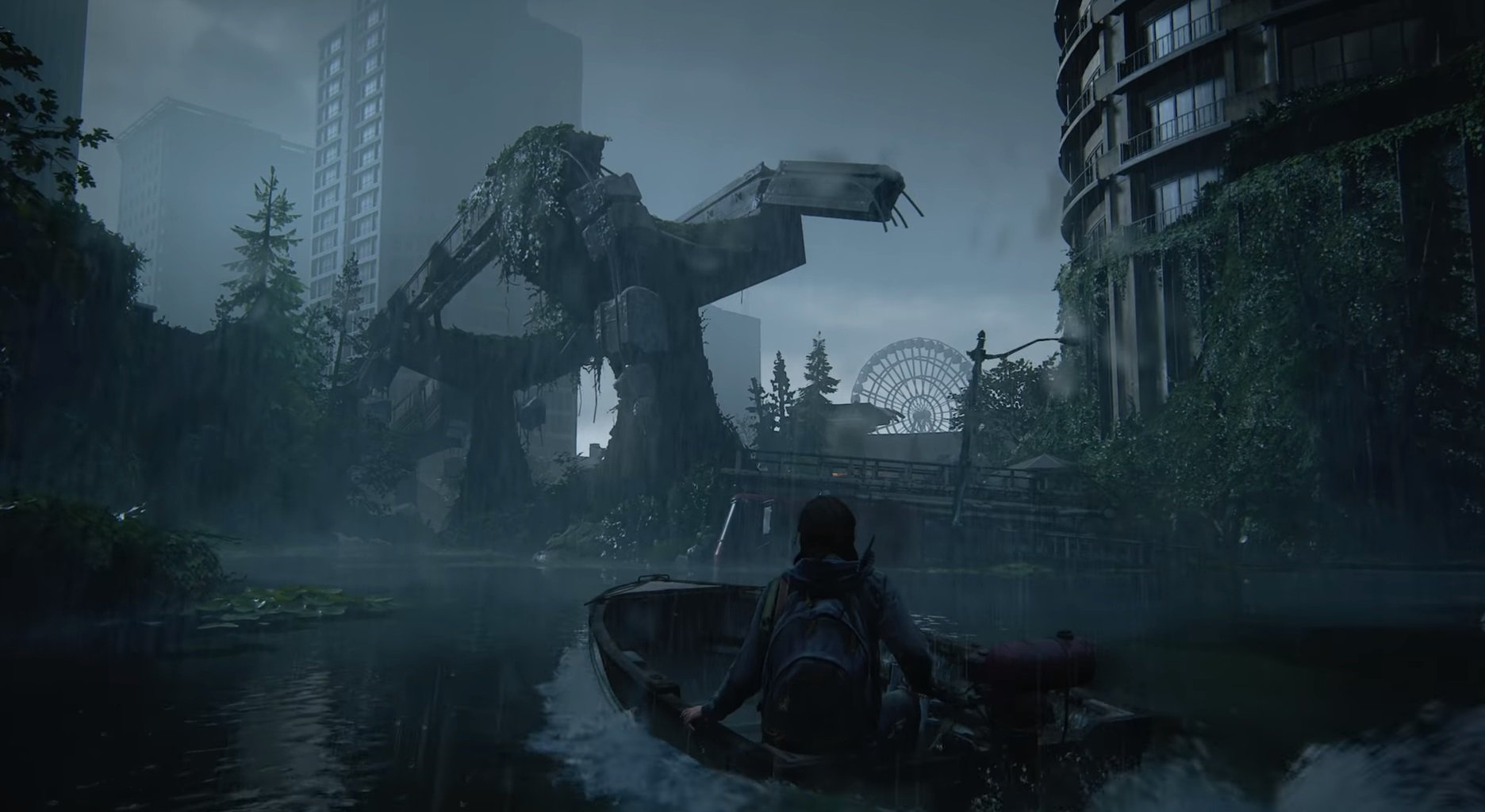 The trailer opens with Ellie and Dinah. Smoking pot, Dinah asks how Ellie would rate their kiss. This is likely in reference to the kiss we saw in the E3 2018 trailer. The trailer shows the snowy mountain town where Ellie and Dinah are currently residing, and we feel it may be called Copper Peak based on the “Copper Peak Inn” shown around 22 seconds into the trailer.

The town design feels somewhat reminiscent of Red Dead Redemption 2 with a butcher shop, a store called “Nubuck Leather” and horses used as the primary method of transportation. However, lights have been strung up through town, giving it a nice warm glow. In the background, guard towers keep an eye out for danger.

This town, which may or may not be called Copper Peak, will likely serve as your base of operations during the early stages of the game. A large gate blocks entry in and out, and it's through this gate that Ellie and Dinah venture out with a few other members of the town, likely to pick up supplies.

The mangled corpse of a moose can be seen near a car before the trailer transitions to show Ellie facing a broken wall covered in Cordyceps growth, suggesting enemies may be close by. When Ellie falls through a section of rotten floorboards, the screen goes dark and you can hear the signature sound of a Clicker, which is revealed a few seconds later.

Moving forward in time, it appears Ellie and Dinah get separated at some point as we see Ellie searching for her on her horse, while a horse without a rider follows close behind. Approaching a surprisingly well-kept cabin, Ellie makers her way down towards what seems to be the basement area of the house. There, Ellie finds a pool of blood trailing under a door.

Opening the door, Ellie is ambushed by a man in a hat. She’s shown pinned to the floor, her nose bloody. She says, “Please, stop!” before a gunshot can be heard along with Ellie’s anguished scream. While we don’t want to believe that Dinah gets killed to forward the plot in The Last of Us Part II, it’s definitely what this trailer seems to indicate.

Following another cut to darkness, the trailer resumes with a shot of a shirtless, wounded Ellie, before cutting again to clothed Ellie opening the door for Tommy, Joel’s younger brother. Tommy was shown in a previous trailer, warning Ellie about a group called the Seraphites. Are they the ones who kill Dinah? Do they present a threat to the town of Copper Peak?

Perhaps, which would align with other trailers that show Ellie facing human enemies along with the Infected. Ellie tells Tommy, “I have to finish it…” before heading out for a mix of revenge and closure. Scenes of a post-apocalyptic city can be seen from various points. Not only will you be able to ride horses in The Last of Us Part II, you’ll also be able to use vehicles like boats.

Combat is shown again with a full range of weapons to choose from including guns, a bow, and a knife. New forms of Infected seem to be hinted at in this trailer, along with other hazards like attack dogs that can knock you down and leave you vulnerable. If you’re worried about taking on all of these threats alone, don’t worry, the trailer answers the biggest questions fans have had… where’s Joel?

Has he been behind us the whole time?

In the trailer, Joel sneaks up behind Ellie and surprises her. Ellie wonders what he’s doing there before Joel says, “You think I’d let you do this on your own?” We were hoping Joel would be included in The Last of Us Part II, and Naughty Dog certainly did not disappoint. We’re excited in ways words couldn’t possibly do justice.

What’s nice is we won’t have to wait too much longer to play The Last of Us Part II either as the trailer ends with a final release date of 2.21.20. Yes, The Last of Us Part II will release on February 21, 2020 and there will be different versions of the game available for purchase including the Standard Edition, Special Edition, and Collector’s Edition as outlined in a post on the PlayStation Blog.

After reviewing the trailer again, what are you most excited for? Is it the return of Joel, all of the enemies you’ll face, the wealth of combat options, or something different? Let us know down in the comments below!