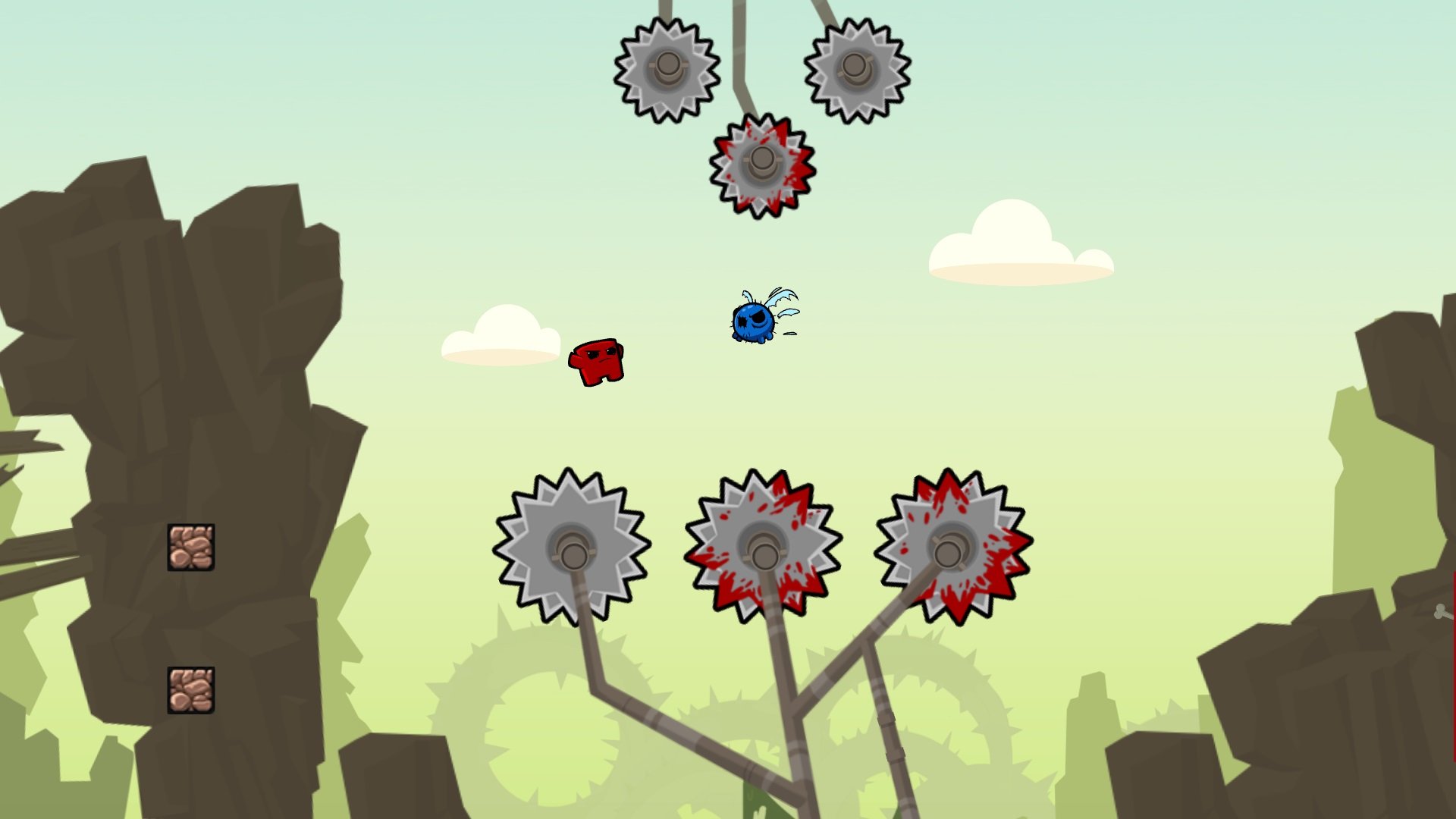 One of our favorite indie games is Super Meat Boy, a title that’s difficult enough to make you want to break your keyboard in half while also hooking you with its charm. Given that we’ve put hundreds of hours into the original Super Meat Boy, it makes sense we’d be excited for the sequel, Super Meat Boy Forever.

Excitement aside, there’s still a lot we don’t know about Super Meat Boy Forever including the release date, which remains undisclosed. Other things we were curious about include the difficulty and new aspects of level design. Will Super Meat Boy Forever be as challenging as the original? How does the introduction of an auto-run mechanic shake things up?

We ask these questions, and more, in an exclusive interview with creator Tommy Refenes at PAX West 2019!

Before we get started talking about Super Meat Boy Forever, can you introduce yourself?

How does the random level generation work in Super Meat Boy Forever?

Tommy: If you imagine the world 1-1 for example, 1-1 has 100 smaller level chunks and it takes between 7 and 8 of those depending on difficulty and smashes them together to make one long level. We rate the little chunks by difficulty and you get a much longer level and there’s only like 6 per chapter now (plus a Dark World).

The end result is a game with more levels in the first 3 worlds than in the entire first game because each one has between 70 and 100. Basically, it’s like sequel that’s not exactly the same because we didn’t want to do the exact same game over again. We wanted to make a ton of levels and present them in an interesting, fun way that people could constantly replay. Each save game, you’ll get new levels and you’ll get different combinations of levels all smashed together.

Super Meat Boy Forever sounds like it’s going to be packed with content! How many levels are going to be in the final version?

Tommy: When it’s all said and done, there will be about 7,200. We won’t launch with 7,200, we’ll launch with probably closer to 5 or 6,000 just based on what we’re making now, but our plan is to constantly add to it and build and build and build. Will there be any new modes in Super Meat Boy Forever? Tommy: With the amount of levels, we’ll have different modes that you can play. We’re planning on doing a “Daily Run” sort of thing, like a daily or weekly run where there’s a set level seed and there’s a leaderboard and you get as far as you can without dying.

There’s a Brutal Mode, and Brutal Mode gives you 3 lives and you have to go through 50 of those level chunks instead of 7. There’s Chaos Mode which, every time you die, it starts you back over and regenerates an entirely new level for you. It’s all about replayability and people being able to play the ridiculous amounts of levels we actually have.

Given the amount of levels this time around, how long do you think it’d take a speedrunner to beat Super Meat Boy Forever?

Tommy: That’s an interesting question. I actually get it a lot because each save game is like your own full Meat Boy game. Depending on categories the speedrunners make up, I mean I imagine a scenario where it’s like we’re going to do a race, here’s the level seed and then everybody goes through and races it through.

I feel like it’s just as easy to speedrun as any other game but it’s going to be up to the speedrunning community to figure all that stuff out. They’re like the engineers of that, like nobody would’ve thought Ocarina of Time would be a speedrunning game and be able to be beaten in 18 minutes.

Are there any differences between Meat Boy and Bandage Girl?

Tommy: No, I mean there’s graphical differences in that Meat Boy punches and Bandage Girl kicks, but they play exactly the same. The characters in this game don’t have any special abilities or anything, they all play the same. There will be different ones you can unlock but at their core, they’re exactly the same.

What was the decision behind adding an auto-run mechanic to Super Meat Boy Forever?

Tommy: There are a couple reasons for that. The super short answer is that I didn’t want to do the exact same thing over again. With Super Meat Boy, I kind of feel like we mastered the whole traditional 2D platformer thing. The longer answer is that after Super Meat Boy came out in 2010, it was around the time everybody was wanting phone games, and people were asking us constantly for Meat Boy on the phone.

I’m like, that’s not going to work, that’s a terrible idea. Until… I was in my GDC hotel room in 2011 and I was thinking I could make a Meat Boy game that would work. The idea was, I bet I could simplify this down to 1 button. At the time, I had my laptop and I had the Super Meat Boy code on it, so I made a version of Meat Boy that would constantly run and change directions and just be able to jump.

I made a couple of little levels and I’m like, “Hey, this is kind of fun!” But that was 2011, we didn’t really work on it until 2014. The 2014 game, the scope of it was much smaller. It had really simplistic art, it had a throwaway sort of story, and it was only going to be 3 chapters. When I was able to work on it again come 2017, nobody had really done anything with a simplified and really, really hard platformer that controls well.

I was actually super worried about Super Mario Run, but then I was like, well Mario Run is not what I can do with this and what I’ve already done with it. When 2017 rolls around, I decided [Super Meat Boy Forever] is going to be a full sequel and I’m excited, we’re just going to go all out. The reason the game isn’t out yet is because we have found a way to make so many levels with two buttons and nothing really overlaps.

There’s nothing where it’s the same concept over and over. It’s been interesting, and I’m really glad we did this because I was working 8 years, the team’s been working 3 years. So, I spent 8 years on this. If it was the exact same thing and I was still working on it I’d be very, very bored instead of excited.

What platforms will Super Meat Boy Forever release on?

Tommy: The initial mobile thing was like yeah, it’ll work on mobile. Eventually, we’ll put it on there, but at launch it’s just going to be PC via the Epic Games Store, Nintendo Switch, PlayStation 4, and Xbox One. And then at some point later, we’ll put it on mobile. It works the same because it’s just two inputs and you can do that really easily on a phone without anything clunky. It plays the same on the Switch that it plays on a tablet.

Will people be able to create their own levels for Super Meat Boy Forever?

We’re basically going to give people the exact same tools that we used to build all the levels. Super Meat World had some really interesting levels, really cool concepts that we didn’t think of when we were making Super Meat Boy because we were zero’d in. When you have fresh eyes on stuff, communities just tend to innovate and obsess and make really interesting stuff. I’m very excited about that. We’re not showing any of the Dark World here [at PAX], but Dark World is like nightmare fuel and the community makes Dark World look easy sometimes.

Is Super Meat Boy Forever harder, or will it be more approachable for newcomers thanks to the auto-run feature?

Tommy: It’s a Meat Boy game so it has to be hard, that’s part of its pedigree. We do have different difficulty rankings that we can do because of the randomly generated nature of the game. What I’ve seen here with various players is the game is easier to play so we can make it a little harder because it’s not using twitchy controls, you’re not having to hold down the run button. Like, that hurt my wife’s hand. I think the accessibility of the game allows us to make it a little more difficult and still be able to introduce players.

Given the small size of the team, were there any difficulties in the development process for Super Meat Boy Forever?

The hardest part for me was actually being able to keep people busy and be like, “Oh, you need to do this. You need to do that.” I’m really not used to that, I’m used to just doing it all. In the beginning, that was kind of challenging, but you get used to it. You’ve dedicated part of your day to, let’s check in on everybody, let’s make sure they’re doing stuff, and everyone’s happy.

Any updates on the Rival Rush card game spin-off?

Tommy: That kind of came about in a weird way. It was PAX East 2018 in Boston. Kyle, Brian, and I were all like, “We don’t have anything to give out.” People give out stuff at booths and I just throw all that crap away. When people just hand me a flyer sometimes I’m like, “Oh, neat…” and then throw it in the recycle bin.

We jokingly said that we should make like a Magic card that was like a “Meat Boy” Magic card and then give that out because people won’t throw it away. That kind of ballooned into well, we could just make a card game. Right before E3 – the night before I left – Kyle came over to my house and we had index cards and we drew out all the stuff. I went to E3 and I came back and Kyle’s like, I think I have a cool design for all of this.

Over the next month and a half, I hired a bunch of artists to make all the card art and we got it printed and released it at PAX. It was a 2-month turnaround from index cards to actual game. It was a cool side project we did in a weird amount of time. A weird record amount of time. I think we’ll eventually do some expansions for it but after this [Super Meat Boy Forever] is done. It was tough getting the PAX build ready last year, and releasing a card game, and I had a kid, and I moved to a new house. It was really dumb to do all that at once.

Any hints on when Super Meat Boy Forever will be released?

Tommy: We are getting there. We have way more content than we can actually show in these builds because there’s a lot of story spoilers and stuff like that. I am still hoping for this year, but I also don’t want to say anything until all the content is done and we’re going to go through certification. Hopefully we’ll get there soon, but the official answer is “when it’s done” and it’s extremely close to being done, I can say that.