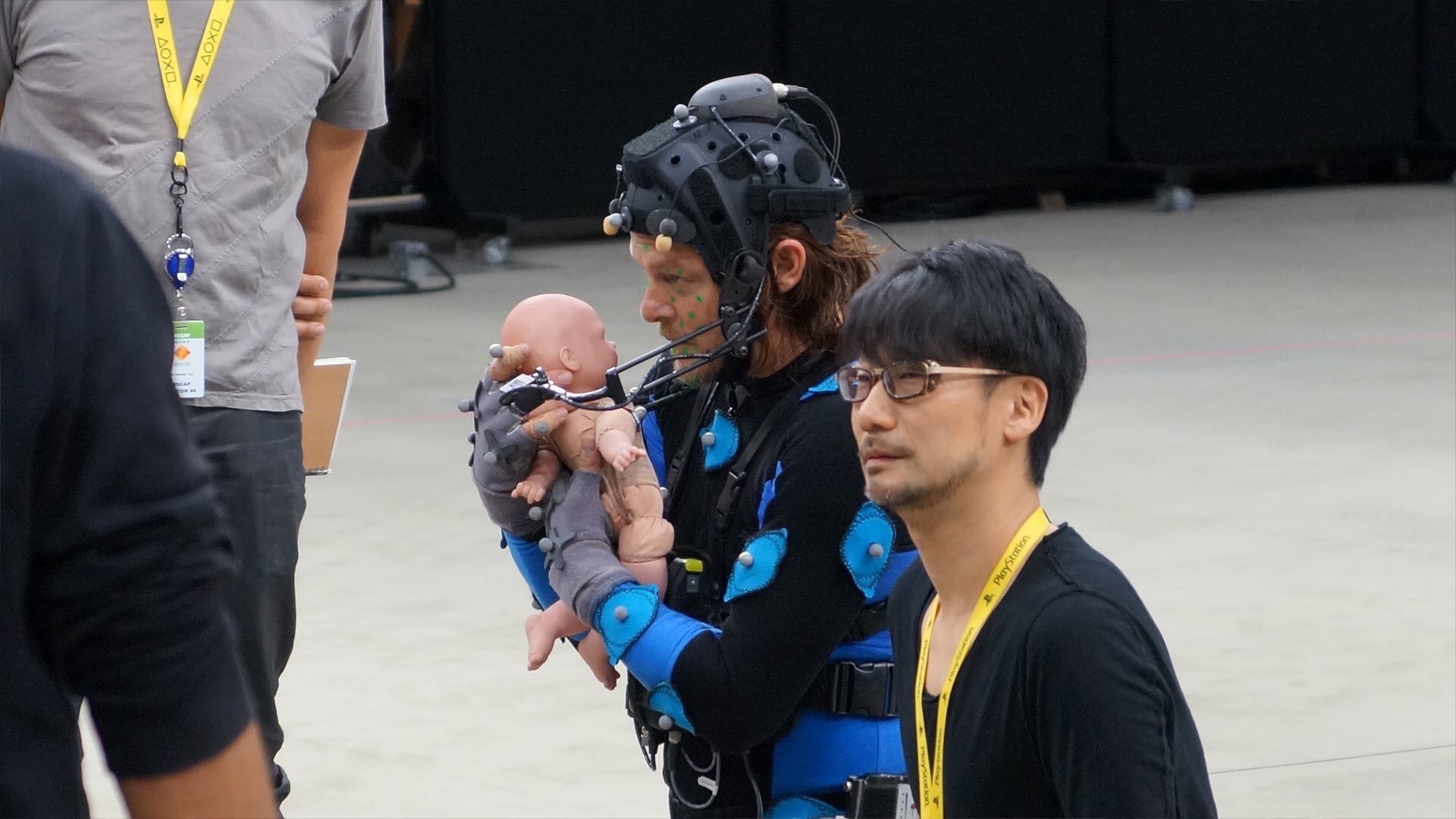 Hideo Kojima took to the stage at Gamescom Opening Night Live to share new details about his upcoming game, Death Stranding. If you were hoping the game would make more sense, we’ve got some bad news, it doesn’t. If anything, we’re even more confused than we were originally. Despite having no idea what’s going on, we’re also really excited to play whatever the hell Death Stranding is. Bring on the beebees!

To kick things off, Kojima shared details about two of the characters teased in previous trailers: Mama and Deadman. Played by Margaret Qualley, “Mama” has a tragic backstory where her BB is no longer alive. Because of this, she’s trapped in the same location, unable to leave.

It’s not explained in-depth, but it seems like if she were to leave that location, she’d lose the remaining connection she has with what she describes as her daughter. It appears her BB is her actual baby, not just one taken (stolen?) from someone else.

Kojima confirmed that each character has their own sub-story, meaning you’ll be able to learn more about Mama and her ghost BB. Meanwhile, Kojima also showed more of Deadman as played by Guillermo del Toro who elaborated upon how BBs are used in general.

There’s a lot to process from this segment, but it seems like BBs are taken from a “Stillmother” with the pod itself simulating a mother’s womb. Almost like like a portable incubator for preemie babies. The reference to Stillmothers here feels akin to when a baby is born dead, or stillborn, except in reverse where the mother has passed instead.

Sam’s BB appears to come from a Stillmother located in the “Capital City” who is described as brain dead. In Death Stranding, BBs can only survive away from their Stillmother for up to a year before they die, with Deadman warning Sam not to get too attached to his BB because of this.

According to Deadman, BB's are just equipment, having a special connection to the "world of the dead" which helps them and people like Sam sense BTs. In the scene with Deadman, Sam is told he must calm his BB and reduce its stress levels by periodically connecting it to its Stillmother using a special machine that syncs its pod data to conditions in its Stillmother's womb. We know, we're confused too.

When given a BB in Death Stranding, it seems like you act as a sort of surrogate for a period of time, as shown later in an extended gameplay reveal. Speaking of which…

The gameplay of Death Stranding shown at Gamescom 2019 opens with Sam urinating. You can move around while peeing, and you can track how much pee you’ve released. After peeing, a mushroom springs up in the trailer, hinting that you can use your pee to create mushrooms if you so choose. Can you eat them to gain perks? Would you want to? We have no idea.

Kojima confirmed that while you can freely move around as you pee, there’s no possible way to actually see the dick of Norman Reedus. Good to know, we guess? Kojima also said that the more people who pee in an area, the better the rewards. Do you get special mushrooms if you all pee in the same location? Can you write your name using pee? These are the questions we need answered, god damn it!

Oh, and your pee can apparently be used as a weapon. We’re not sure if Kojima is just pulling our leg, or is entirely serious about all of this.

Other fun tidbits shown include a cameo from Geoff Keighley himself who’s dubbed “The Ludens Fan” in Death Stranding. With the way he’s portrayed, we’re not sure if this is so much a compliment or a dig. Both? Either way, Kojima describes Geoff’s character as a “Prepper” who may not be connected to the main story, but is worth seeking out in order to acquire resources and expand your connections to other players.

In the trailer, it looks like you can deliver goods to these Preppers in exchange for updates and information, which is kind of cool. After leaving Geoff’s little hilltop residence, we're able to see what happens when Sam takes a nasty fall down a cliff. In this instance, his BB is startled and Sam has to pick up its pod and sort of… shake it gently to soothe the BB?

Kojima noted that you can soothe your BB using your PlayStation 4 controller’s motion controls. You won’t want to shake too aggressively as this will anger the BB, but just sort of gently move your controller around. So, Death Stranding is part delivery game, part single father simulator? I mean, we’re here for it, we’re just completely baffled at the odd mix of gameplay shown at Gamescom. Our brain is still trying to digest it all.

If it's left you wanting more, Kojima confirmed that additional gameplay for Death Stranding will be shown at this year's Tokyo Game Show in September.

After seeing more of Death Stranding at Gamescom 2019, what are your thoughts? Are you as confused as we are? Are you excited for the Norman Reedus peeing simulator? Let us know down in the comments below, and stay tuned for more Gamescom 2019 updates here at AllGamers!