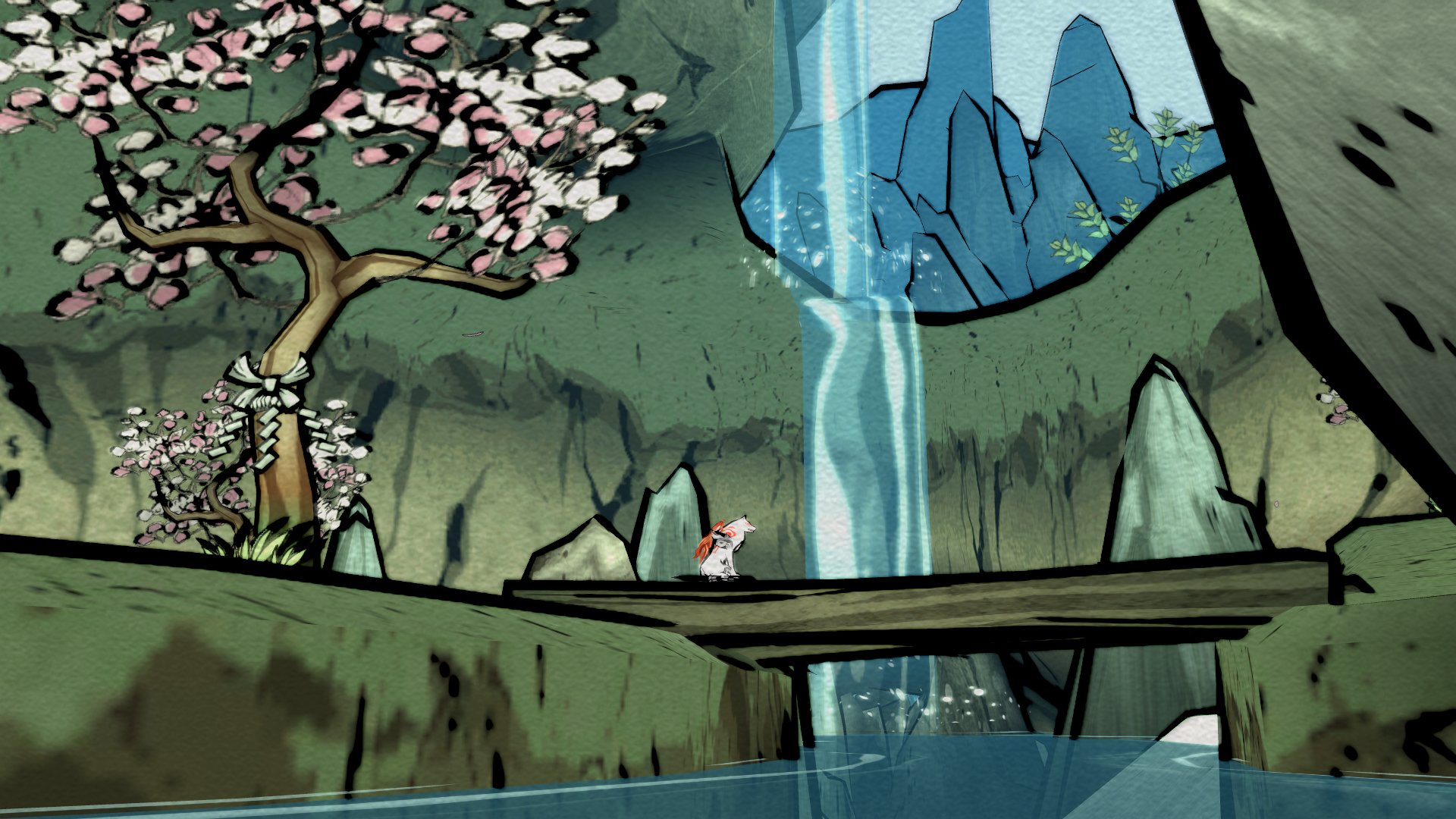 Until now, Okami has been the most shameful gap in my gaming history and since Okami HD(-er) has arrived on PS4, the depth of that shame is only just revealing itself. The original release of Clover’s (now Platinum’s) action RPG in 2006 quietly slipped me by. Out in the same year as Call of Duty 3, Hitman: Blood Money and during the boom of the PSP hacking scene, I was lured away from the simple childlike cartoonish glee of Zelda-like adventures by mature themes like death and getting custom radio soundtracks to work in GTA Liberty City Stories.

Okami’s subsequent releases, re-releases and remasters on Wii and PS3 were no good to me either, as an X360 devotee only picking up each console for cheap towards the end of their lifecycles for a few missed gems. It’s rare to be given so many chances to rectify the biggest lapse in your library, but now more than a decade after the fact, I’ve latched onto what must be my final opportunity.

This year has been a strong one for new games, and in some ways an even better one for old ones. Zelda’s return to open world and non-linear progression has been a hit with almost everyone, and Wolfenstein returned to claim the Nazi-crushing throne with more retro-inspired shooting and a story better than any David Cage “interactive experience”. In among all these modern throwbacks, Okami fits like a cat in a box.

The HD upscale, even on PS4 Pro which provides 4K resolutions and 60 frames per second, means precisely nothing in a game as stylistically rendered as Okami. The Japanese art movement ukiyo-e, consisting of woodblock prints with broad, splotchy brush strokes and a focus on nature, is so timeless as to be unaffected by these new technology gubbins Sony’s latest hardware can throw at it. If anything, it’s testament to how well the Clover Studios team captured a previously unanimated art style in motion.

As its art suggests, Okami leans heavily into the history and culture it was conceived in. The game’s story playfully tosses around elements of Buddhist polytheism and Japanese folklore to form a rich tapestry that delves much deeper than it has any right or need to. A fairly throwaway story roadblock involves a legendary fish in a forest river being said to have swallowed the reflection of the moon, making its waters forever shrouded in shadow. Later, the same not-so-legendary fish swallows one of your canine companions by the name of Ume, Japanese for plum with the shape of plum tree blossoms etched into his flank. It just so happens ‘the moon and plum blossom’ – both swallowed by the legendary Whopper fish – is the subject of multiple ukiyo-e works by masters of the style including Katsushika Hokusai, best known for the era-defining artwork The Great Wave off Kanagawa.

It’s this adherence to source material that makes Okami such a special game, despite its fairly rote replication of gameplay from other successes in the genre such as Zelda’s discrete dungeons and Metroidvania tool progression to unlock access to new areas of the overworld. However, even here Okami plays fast and loose with its inspirations to both allude to and spurn tropes of the genre in the same brush stroke.

Your sole existence in the game from the outset is reversing the resurrection of a great evil once vanquished by your wolf-like form 100 years prior. Your inevitable showdown with the eight-headed dragon Orochi is billed as the main event throughout the story more widely than the marketing for a Mayweather pay-per-view. This is, you’re assured, the fight to end all fights. Instead, it’s just the first act climax, allowing you to experience something I’ve long thought missing from the Zeldas it weighs up against: basking in the afterglow of your victory.

Once the world is saved in almost any other RPG, credits would roll and if you’re allowed the privilege of loading your last save it will be before the boss showdown begins. There is no chance to explore the world you’ve freed from evil and soak up all that praise. Okami lets you have your cake, eat it, and get to work on baking a new one all wrapped up in the Kamiki Village festival. It’s all clearly a setup for an even bigger bad to reveal itself, but it’s a storytelling beat that provided a sweet surprise more than a decade after it was written. This experience, and the timeless nature of its artstyle, give Okami a unique immunity against complaints of aging badly, making it perhaps one of the first games to achieve immortality. And I almost missed it.