Limited stock of the classic handheld miniaturized into Game Boy Color watches, but only for New Yorkers. 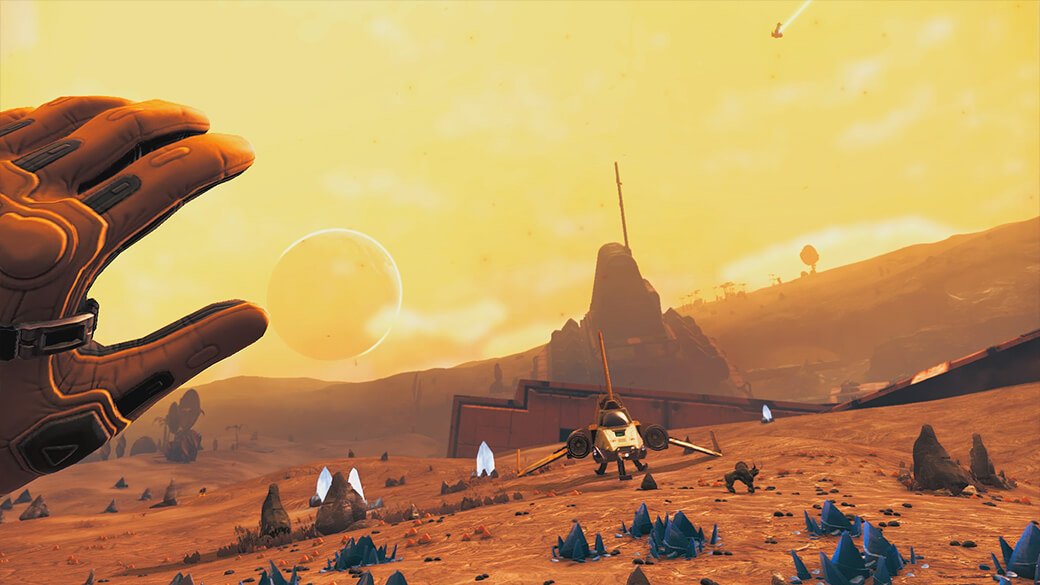 Ice-T voices the ship's navigational AI Balex, who also has a terrifying but cuddly robot husk.

No Man’s Sky Beyond has finally brought VR to the space-faring adventure and, performance issues aside, there’s plenty of reason to check it out if you have either a PSVR or SteamVR headset. Hello Games has taken into account multiple control schemes, letting you use either a DualShock controller or the Move Controllers on PS4. On PC you’ll need to have access to some form of the Vive Wand controllers, though we suspect using a PS4 controller through Steam would also work. Below we'll give a quick rundown of the basics for No Man's Sky VR controls, namely covering how to move around while on planets.

If you're playing No Man's Sky VR for the first time, we highly recommend replaying the tutorial for the start of the game. No Man’s Sky has a wide range of controls to learn. So many, in fact, that you might wonder how VR gaming will keep up with them. If you’re playing with the Move controllers, Vive wands or Valve Index controllers, you can grip or interact with the triggers, while most of the complex options are bunched into menus on either hand. To access them simply point with one hand at the back of the other and you’ll see a menu pop up that you can use to access most of the game’s features.

Most of the game works in this manner in VR, requiring you to point with one hand at the other instead of having any direct control. Want your terrain manipulator? Simply reach behind your right shoulder and grab it with the trigger! We’re getting ahead of ourselves however, as the main thing most players will want to know if how to move.

How to move in No Man’s Sky VR

When you're outside of your ship, No Man’s Sky VR uses a teleport-to-move system. That means you can’t trundle around freely if you’re using Valve’s controllers or the PS4’s Move controllers. To move you need to hold down the left-hand navigation button. This will cause a line to start stretching out on the ground in front of the direction you point. At the end of the line will be a circle with some feet in, and it’s there that you’ll teleport when you release.

Turning is another key control, and while you can turn your head, there’s only so far that’ll get you while sitting down. To perform 90° turns you need to press either X or Circle on PS4 Move controllers. Finally, the jetpack. No Man’s Sky VR doesn’t explain this immediately but you can still used the Jetpack to hover around by pressing and holding Triangle.

Using an Index? Movement is handled with the left analogue stick, while the right will let you turn. Clicking in the right stick will allow you to sprint. You can also stick out your arms to strafe while moving. Jetpack here is set to the right B button, but you're need to aim your arm in the direction you want to fire the jets. The same control system applies when swimming, so get used to it!  To open up your menus and access your Log and other menus, all you need to do is press the right thumb button. Pretty much everything else, including entering your ship, is done my making a grab and pull motion in the air with your right hand outstretched.

As you'd hope in VR, all the flying controls are handled with physical motions. The throttle lever on your left hand is used to adjust speed, while the right stick is used to control pitch, roll and yaw. With an index you can activate afterburners with the left A button (likely x on the PS4's move controllers), or hit the left back trigger to kick off the Pulse Drive.

Those are the basics for No Man’s Sky VR controls. There’s more to detail but the game will explain them to you fairly well if you take the time to run through the tutorial once more. For now, why not learn how to access the new Nexus Solar Anomaly and meet some other players!