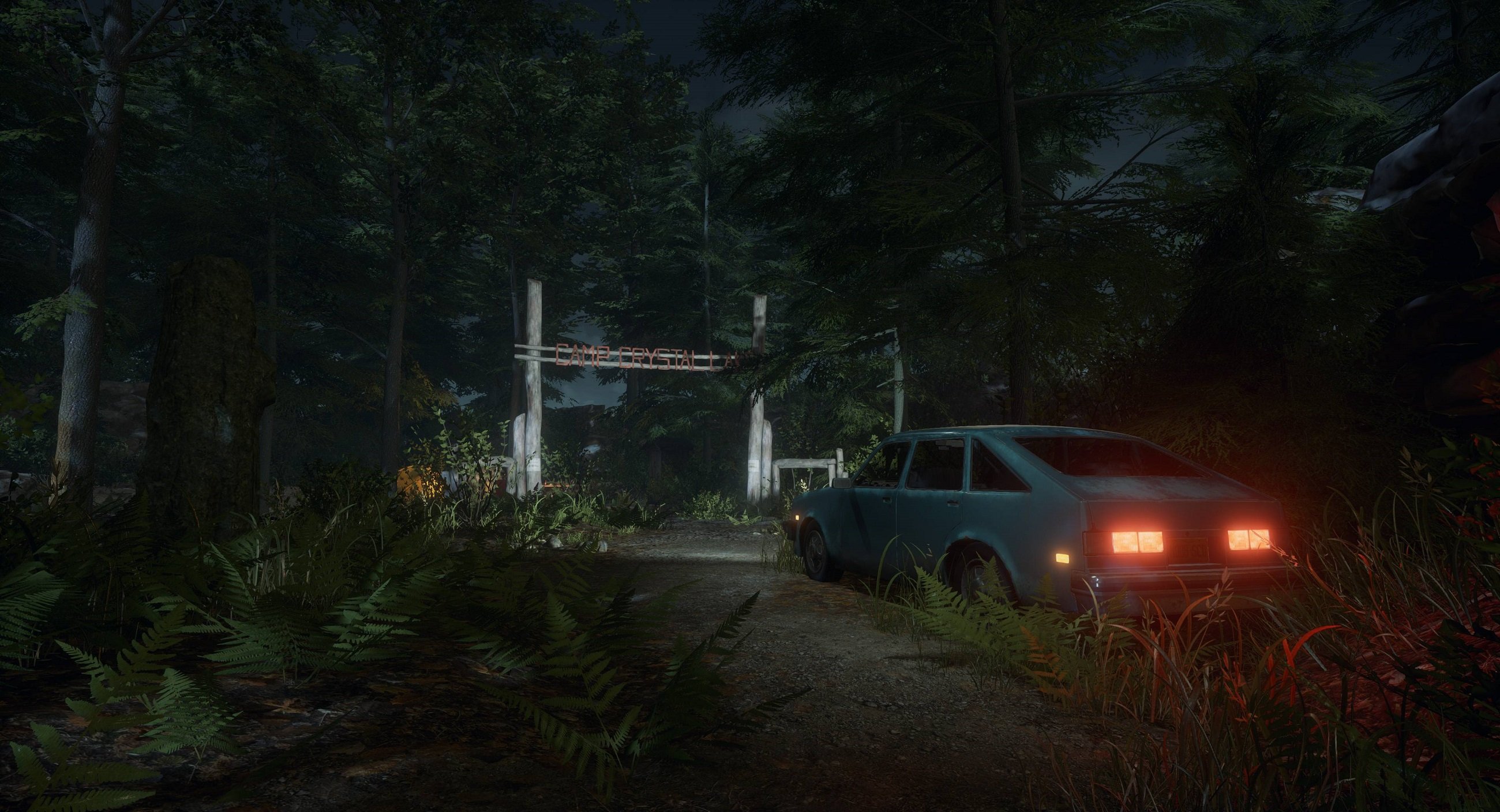 However, given the game originally released in 2017, are there enough players available for smooth matchmaking? Does the game run well, both handheld and when docked? To answer these questions, we’ve put together a comprehensive guide on the Nintendo Switch performance of Friday the 13th: The Game!

If you’re interested in bonus goodies, the physical version also includes a limited edition poster. For digital buyers, keep in mind that the game’s file size is listed at 3.5GB in total. Our download time was less than 30 minutes, though others have reported even quicker downloads at 15 to 20 minutes total.

Now that we’ve covered the basics, let’s address how Friday the 13th: The Game performs on Nintendo Switch in handheld and when docked. When we first launched a game in handheld mode we noticed that by default, the game is a little dark, making it hard to see. Fortunately, we were able to quickly adjust the Gamma from the Settings menu in order to improve visibility.

From a graphics standpoint, the game looks best in handheld mode. When docked, the fact that this is a Nintendo Switch port becomes much more apparent. While both handheld and docked are passable from a visual standpoint, performance is still best on PC if pristine graphics are important to you.

Graphics aside, one thing players will appreciate is how Friday the 13th: The Game offers full controller support on Nintendo Switch. For a more fluid experience, we recommend playing with a Pro Controller over the Joy-Cons as it helps ease some of the game’s control clunkiness. Load times for offline modes on Nintendo Switch are quick and smooth, though online multiplayer is the game’s core component and it’s here that most of the port’s issues reside.

The main issue we encountered with the Nintendo Switch version of Friday the 13th: The Game was when it came time to matchmake with other players. Given that we had an early review copy of the game, it makes sense that matchmaking pre-release would be a challenge. However, it does bring up valid concerns over the size of the Friday the 13th: The Game player pool on Nintendo Switch.

How many people plan to purchase Friday the 13th: The Game on Nintendo Switch? How many people plan to play regularly as the holiday game season approaches? Other things to keep in mind center around your location. Players in Los Angeles or New York City may have an easier time matchmaking over someone living in rural Maine or Utah for example.

Fortunately, a single-player component exists in Friday the 13th: The Game that will let you play even if you lack other people to play with online (including playing with a group of friends, which is always an option). Specifically, there are three different offline modes to choose from including the standard game with Offline Bots, Challenges, and the Virtual Cabin.

Of the three, we had a blast playing through the Challenges which assigns you the role of Jason Voorhees. As Jason, you’ll need to work to complete various objectives. In doing so, you’ll be able to unlock things like character emotes which helps make this single-player mode worth checking out even if you prefer playing online.

How Does it Compare to Other Versions?

Friday the 13th: The Game originally released on PC back in 2017 and is still available via Steam. The base game without added DLC content is available for $19.99 (USD). If you want the complete version, you can also buy all previously released DLC for $14.93 (USD) right now, bringing the total up to $34.93 (USD).

On Steam, you save roughly $5 (USD), not counting what the game may be discounted to during the Steam Winter Sale. As noted above, the game’s graphics are also cleanest when playing on PC. On Xbox One and PlayStation 4, Friday the 13th: The Game is similarly priced with the base game at $19.99 (USD) and DLC content available for purchase separately.

Other things to keep in mind include the fact that Friday the 13th: The Game has been included as part of the free PlayStation Plus games back in 2018. In the future, it’s possible the game may also be included in other promotions like Games With Gold or Xbox Game Pass. If you own an Xbox One in addition to a Nintendo Switch, the Xbox One may be a better platform for online play given this fact. Should the game be added to Xbox Game Pass, the player pool will naturally expand as curious gamers download and try out Friday the 13th: The Game.

However, you will need to purchase a Nintendo Switch Online subscription in order to partake in online matchmaking. It’s too early to tell how matchmaking will perform on Nintendo Switch at launch, but do we anticipate issues as gamers become distracted with the wealth of holiday game releases coming out later this year. Because of this, it may be better to purchase the game on Steam or Xbox One.

For Xbox One, it’s also possible the game may eventually be included as part of Xbox Game Pass, though this is purely speculation on our part. Performance on the Switch is fine, with no major issues experienced in either handheld or docked modes. The ability to sink your teeth into a single-player match of Friday the 13th: The Game while you’re out and about is certainly alluring, even with the goofiness of the AI.

As such, portability is the biggest reason why Friday the 13th: The Game on Nintendo Switch is worth a purchase. If you’re interested in single-player, or are a huge fan of the Friday the 13th series and want to complement your collection with the physical game (and poster), we certainly recommend it. Just keep the other points mentioned above in mind!