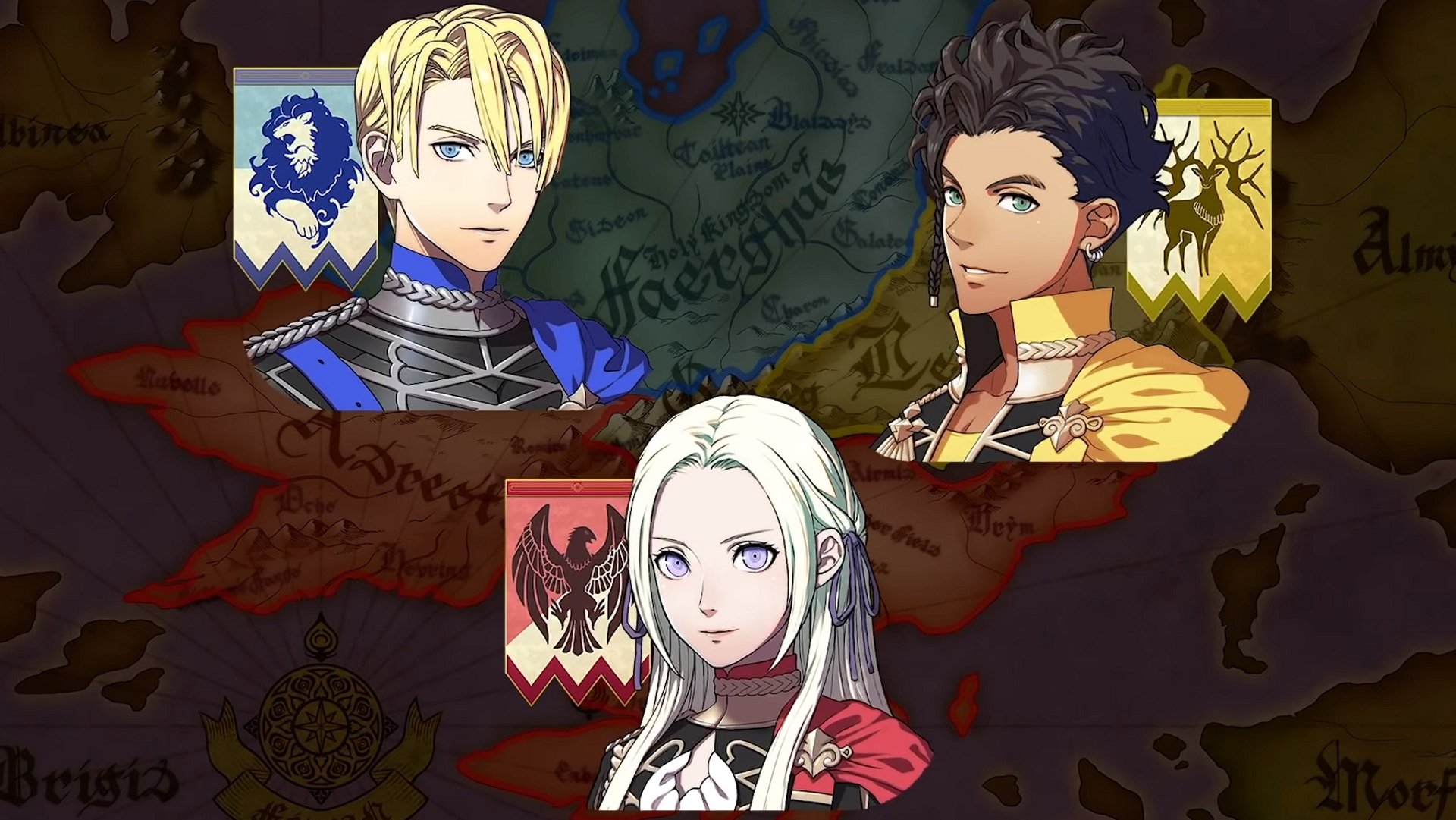 All students and characters in Fire Emblem: Three Houses

When does Wolfenstein: Youngblood release?

The release date for Wolfenstein: Youngblood is a lot sooner than you might think!

If you’ve been looking forward to Fire Emblem: Three Houses for as long as we have, you’ve probably been keeping a close eye on the announcements regarding the students and characters in the game. Building support relationships is a huge part of Fire Emblem’s appeal, so the decision to split the game into three houses makes it important to know who is in which house. To help you out, we’ve put together a guide to all the Fire Emblem: Three Houses characters and students so that you have an idea of who is in which house, as well as a brief overview of each character.

As the name suggests, there are three main houses in Fire Emblem: Three Houses, and at the beginning of the game you’ll be asked to pick one of them to tutor. Each house comes with its own set of students for you to get to know and train in combat. Outside of that are a few other factions including teachers, the Church of Seiros and mercenary groups. For this article we’ll focus on the houses and the characters within them. Click the links below to jump to the house you're interested in as you discover all playable Fire Emblem: Three Houses characters!

Led by Edelgard, the Black Eagles come from the southern Adrestian Empire and specialize in magic, though Edelgard is shown primarily weidling an axe. The eight students in the Black Eagles are:

Edelgard is the only female house leader and holds the crest of Seiros. She starts as a Noble class in-game and is proficient in axes, swords and authority. Her personal skill, Imperial Lineage, increases her experience gained by 20%.

Hubert is the Black Eagles’ tactician and Edelgard’s vassal. He starts as a Noble class in-game and is proficient in reason magic, bows and authority. Hubert’s personal skill is Officer Duty which boosts Gambit Might by 5.

Dorothea is easily identifiable among the Black Eagles thanks to her jauntily-angled hat. A former songstress, she starts as a Commoner class in the Black Eagles. Dorothea is skilled at swords and reason magic. Dorothea's personal skill is Songstress, which restores 10% HP to adjacent allies at the start of each turn.

Ferdinand is the eldest son of the Dukedom of Aegir. He posseses a minor crest of Saint Cichol and starts as a Noble. Ferdinand is proficient with swords, lances and axes, as well as on horseback. His personal skill is Confidence which grants +15 Hit and Avoid while HP is full.

Bernadetta is a shy, reclusive character who starts as a Noble class. She’s strong at using Lances and bows. Her personal skill, Persecution Complex, gives her +5 damage when HP isn’t full.

Petra is a foreign student from Brigid, a vassal state of the Adrestian Empire. She starts as a Commoner class and is strong at swords, axes, bows and riding winged units. Petra’s personal skill is Hunter’s Boon which boosts Critical rate by +20 when enemy HP is less than 50%.

Linhardt is the heir of the Earldom of Hevring and holds a minor Crest of Saint Cethleann. He starts as a Noble class and is strong at using reason and faith magic. Linhardt’s personal skill is Catnap, which restores 10% HP if he waits without performing an action.

Caspar is a good friend of Linhardt and the second-born of the Bergliez family. Starting as a Noble class, he’s strong at axes and brawling. Caspar’s personal skill, Born Fighter, gives -10 Avoid to all adjacent foes during combat.

Dimitri is the crown prince of the Holy Kingdom of Faerghus and holds a minor Crest of Blaiddyd. He’s proficient in swords, lances and authority. Dimitri’s personal skill is Royal Lineage which increases his experience gained by 20%.

Dedue is a servant of Dimitri who’s homeland was destroyed in a mistaken act of vengeance. He starts as a Commoner class and is strong with lances, axes, brawling and armor. Dedue’s personal skill is Staunch Shield which grants +4 Defense if he waits for a turn without acting.

Felix is the heir to the Dukedom of Fraldarius and holds the Crest of Fraldarius. Starting as a Noble class, he’s proficient at swords, bows and brawling. Felix’s personal skill, Lone Wolf, grants +5 damage when a battalion is not deployed or the battalion has zero health.

Annette is a friend of Mercedes. A sorcerer from Faerghus, she possesses a minor Crest of Dominic. Starting as a Noble class she’s strong at axes, reason magic and authority. Annette’s personal skill is Perseverance, which grants +4 strength when Rally is used on an ally.

Mercedes is a former noble from the Adrestian Empire, raised as a Commoner class after fleeing her land to live with a church in Faerghus. She posses a minor Crest of Lamine and is strong with reason and faith magic. Mercedes’ personal skill, Live to Serve, heals Mercedes by the same amount when healing allies with white magic.

Sylvain is a flirtatious Noble with a minor Crest of Gautier, and a childhood friend of Dimitri, Ingrid and Felix. He’s strong with lances, axes and horse riding. Sylvain’s personal skill is Philanderer, which grants +2 damage dealt and -2 damage received when adjacent to a female unit.

Ashe is a young man who was adopted by Lord Lonato at the age of ten. Starting as a Commoner class, he’s strong with axes and bows. Ashe’s personal skill is Lockpick, which allows him to open locked chests and doors.

Ingrid holds a minor crest of Daphnel and is the daughter of Count Galatea. Starting as a Noble she’s strong with swords, lances, horse riding and flying units. Ingrid’s personal skill is Lady Knight, which grants +3 might and +5 hit rate when using a Gambit.

Claude holds a minor Crest of Riegan and is heir to the lead house of the Leicester Alliance. Starting as a Noble class, he’s strong with swords, bows, authority, horse riding and flying units. His personal skill is Leicester Lineage which grants 20% bonus experience gained.

Lorenz is the heir to the Dukedom of Gloucester and holds a minor Crest of Gloucester. Starting as a Noble class, he’s strong at lances, bows and reason magic. Lorenz’ personal skill, Distinguished House, increases damage dealt by +2 when a battalion is deployed.

Hilda is the eldest daughter of, and possesses the Crest of, Goneril. Described as spoilt and lazy, she begins the game as a Noble class. Hilda is strong at lances and axes. Hilda’s personal skill is Advocate, which increases the damage of an adjacent male ally by +3 when they enter battle.

Raphael is an orphan who lost his parents in a monster attack. He starts as a Commoner class and is strong at axes, brawling and armor. Raphael’s personal skill is Goody Basket which gives a Luck% chance of regaining 10% HP at the start of a turn.

Leonie is the daughter of a hunter and a big fan of Jeralt, the player character Byleth’s father. Starting as a Commoner class, Leonie is strong with lances, bows and horse riding. Leonie’s personal skill, Rivalry, grants +2 damage dealt and -2 damage received when adjacent to a male ally.

Ignatz is the son of a merchant’s family who prefers art to martial arts. Starting as a Commoner, he’s strong with swords, bows and authority. Ignatz’ personal skill, Watchful Eye, grants +20 hit rate.

Lysithea is the heir to House Ordelia and holds both a minor Crest of Charon and a major Crest of Gloucester. Starting as a Noble class she’s proficient with reason and faith magic, as well as authority. Lysithea’s personal skill is Mastermind, which doubles skill EXP from combat.

Marianne is the daughter of an unknown noble in the Leicester Alliance. Starting as a Noble class she is strong with swords, faith magic, horse riding and flying units. Marianne’s personal skill, Animal Friend, restores 20% HP when adjacent to an ally on horseback or a flying unit.

Those are all the house students and characters from Fire Emblem: Three Houses. Which house and student do you like the most? Let us know in the comments below! If you haven’t made your mind up on who to pick yet, we’ll soon have a guide to help on that front, so stay tuned!