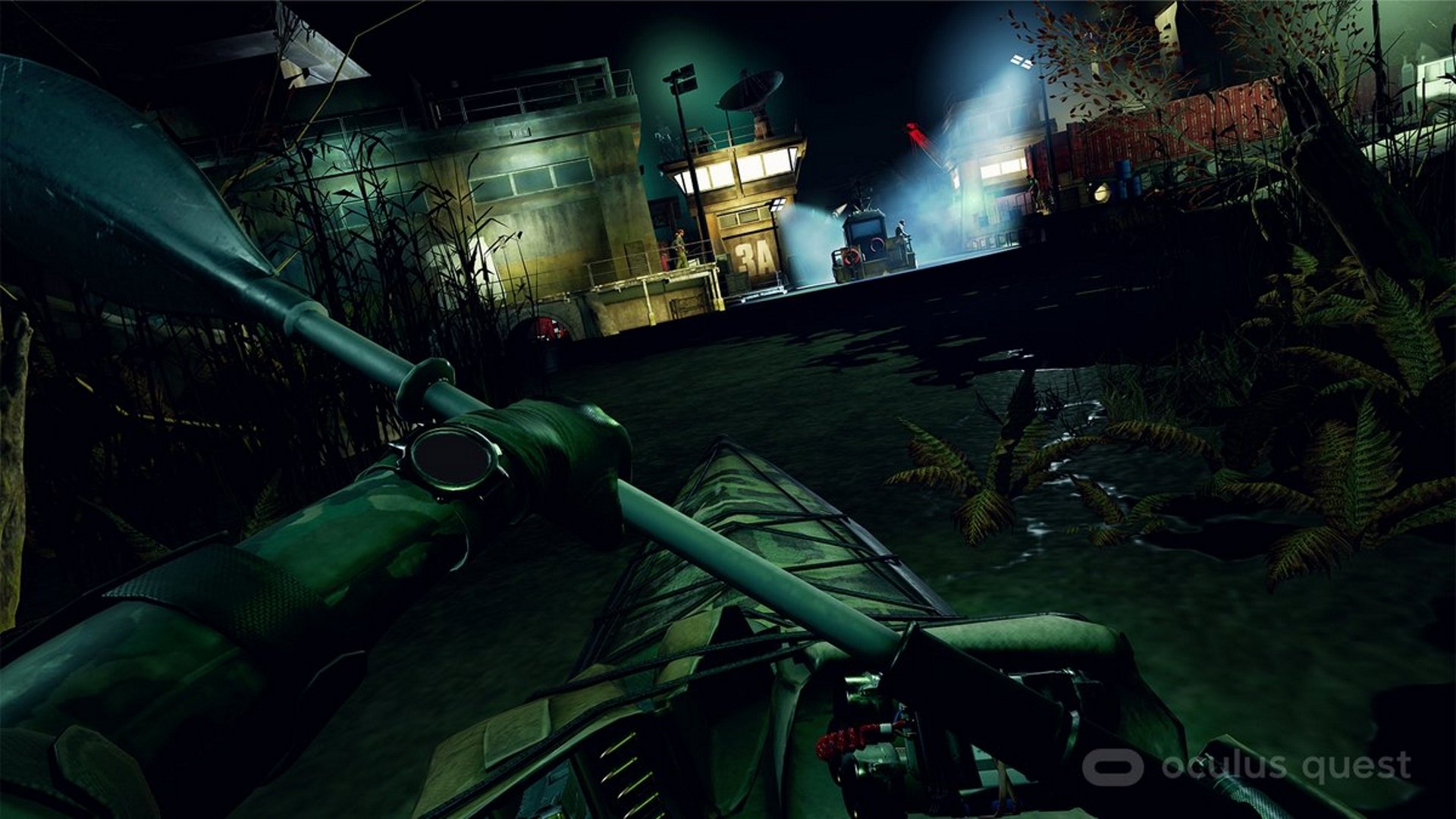 There were plenty of big announcements and reveals from both AAA and indie studios at this year’s E3, but what you might have missed behind the bombastic trailers is that VR is set to have a particularly good year as well. Lone Echo 2, Asgard’s Wrath, Sniper Elite VR and more were on display, but it was the tactical kayaking action of nDreams’ Phantom: Covert Ops that took home the coveted Game Critics Award for best VR/AR game at the show.

Last week we had the chance to speak with Patrick O’Luanaigh, founder and CEO of nDreams at the Guildford Games Festival. High off the recent award announcement, he was keen to discuss more about the design principles and inspirations behind Phantom: Covert Ops.

Phantom: Covert Ops puts the player in the shoes, and, um, boat, of a military stealth expert whose job is to sneak into enemy encampments via water, disable key equipment and then make it out again unscathed. The entire game plays out inside a kayak, letting the player paddle their way through long reeds and under bridges to hide from guards. The idea of a tactical kayak might seem laughable at first, but O’Luanaigh and nDreams are committed to producing one of the most interactive and entertaining VR shooters yet.

“It’s all about motion control, one-to-one VR interactions,” O’Luanaigh explained. “So you use the hand controllers, you’re in the kayak and you can grab the paddle with both hands and paddle just like you’re in a kayak with free movement around these military areas as you sneak in to blow stuff up and carry out objectives.”

One of the key design philosophies for Phantom was to ensure the player feels rooted in the world, and that means removing in-game menus and radial wheels, common options in other VR offerings.

“For us, what makes VR special, or one of the biggest things that makes it special is the fact that you can use hand controllers to reach out and grab to pick stuff up, because that’s so intuitive,” O’Luanaigh said. “You’re in VR, you forget where you are and you lose yourself. As soon as you’ve got buttons that do something different to real life. When you have a button to go forward or a button to fire a laser or whatever then it suddenly breaks that abstraction and immersion.

To that end, all the tools of your trade will be laid out around you in Phantom, making for one seriously decked-out kayak. Remembering where each tool or weapon is will be a key part of mastering stealth and combat.

“You’ve got a gun on your chest, a gun over your shoulder,” O’Luanaigh continued. “You’ve got a sniper rifle down to the right. You’ve got C4 explosives, ammo and other bits in front of you. Everything is there to grab. There’s no abstraction, there’s no UI or anything like that. It’s all kind of there, it’s all stuff you can pick up and use.

The immediate question that springs to mind when first introduced to Phantom: Covert Ops is, why a kayak? Seated, cockpit-style VR experiences are common, but few opt for water as their medium of transport. In the case of Phantom, nDreams actually came to the idea of the kayak long before the game itself had materialized.

“We were playing around with lots of things,” said O’Luanaigh. “We like to prototype things and try things out. One of the challenges with seated VR is running around. The sort of thing you’d do in Call of Duty — rushing around — it’s not comfortable in VR unless you’re actually doing it.

Congratulations to @nDreamsVR on winning Best VR/AR Game of the Year for Phantom: Covert Ops at the #E32019 Game Critics Awards! https://t.co/lqVSQcL2Gs pic.twitter.com/njAZT8mTdX

“We were thinking of different ways to move around and we tried the kayak out with lots of ideas, and it was one of the ones that just worked really nicely. The ability to grab a paddle as you would in real life, it just lets you go anywhere! You can do quick turns, you can go fast, you can go really slow. All just with grabbing with your hands, it’s so easy. "

Luckily, nDreams didn’t have to search for long before they found the perfect inspiration for a game about a man and his paddle.

“We thought we should make a game based on [kayaking], and then we found out that there are real-life military units who do sneak in with kayaks because they don’t want an engine so you can be silent and stealthy,” O’Luanaigh said. “So this actually does happen, which is cool! You could do an olympic kayaking simulator, but d’you know what? We love narrative and story, and we love stealth-action as well so it all came together really.”

“What’s interesting is that every journalist or previewer has said the same thing: ‘A tactical kayak? What?’” O’Luanaigh laughed. “But as soon as you put [the headset] on and you’re in the game, you go: ‘Oh my god, yes, I get this.’ So it’s a perfect example of the proof is in the pudding. You need to try it out and see it. It just works and just feels so natural. Hence we were so lucky to win the Game Critics Award.”

That’s not to say Phantom will be a po-faced affair, however. In designing the missions and enemy AI, nDreams is hoping to invoke an action movie atmosphere, letting the player sneak their way through goon-filled bases, eavesdropping on conversations as they hunt down their objectives. In this regard, early Metal Gear Solids acted as a huge inspiration for O’Luanaigh and his team during development.

“We all loved the series and it’s got some great stealth, and you can sneak in but you’ve got guns to use if you want to, but you definitely don’t want to go loud the entire time. You need to get that balance right. The way the levels [in Phantom] are set up definitely has that in mind. Certainly there are elements of Call of Duty, but because it’s VR, it’s doing something quite new as well. The core of it, the mechanic of navigating around in a kayak freely and figuring out how you’re gonna do these objectives, is quite new.”

It’s easy to assume that, traveling down waterways, Phantom: Covert Ops would make for a fairly linear experience. However, O’Luanaigh was keen to stress the options available to a player, citing different routes and means to achieve the job you’ve been sent in to complete.

“We’ve tried to give people a lot of freedom,” said O’Luanaigh. “While most of the levels have an objective to achieve, there are different ways and paths you can go down to do that. [For example] if you’ve used up all your C4 explosive then there’s a way you can’t go. But we’re not making a massive sandbox that’s 50 miles by 50 miles and you can go anywhere. This isn’t a big, Far Cry, open-world type thing.”

That approach applies to your objectives themselves, letting players come up with their own solutions to the task at hand.

“If you need to destroy something [electrical] you can use explosives,” O’Luanaigh continued, “you can shoot panels out, but you can also paddle underneath, find a fuse box and pull the wires out with your hands. We’ve tried to make lots of different ways to achieve your objectives.”

This being a stealth-action game after all, players will also be reassured to know that you can play through the entire thing without killing a single person. In fact, nDreams have several challenges up their sleeves to add replayability to the game.

“You get badges and awards for playing in different ways,” said O’Luanaigh. “All of the levels I believe will have the ability to play through without killing anybody and you’ll get badges for that. Likewise, you’ll get awards for killing every single enemy in the levels, which is quite hard because we’re trying to make them smart! Ideally, players will use stealth and action at the right times, but you’ll be able to play it both ways. So if you want to be a stealth ninja and play through the whole level without the enemies seeing or spotting you, you can do that.”

And finally, crucially, we had to know if you’d be able to take out a man’s legs with a kayak paddle.

“Yes,” confirmed O’Luanaigh. “The idea is anything you think you can do in real life, you can actually do. You can use the oar to push yourself off from the bank, you can use it as a weapon. Anything you expect to do, you can do. If you see an enemy, you’ll be able to whack them with the kayak paddle.”

Here at AllGamers we can’t wait to see Phantom: Covert Ops speedruns, just to watch someone paddle their way furiously through levels in record time. Phantom: Covert Ops is due to release later this year on Oculus Quest and Oculus Rift. Thank you to nDreams’ Patrick O’Luanaigh for taking the time to speak with us about the game.