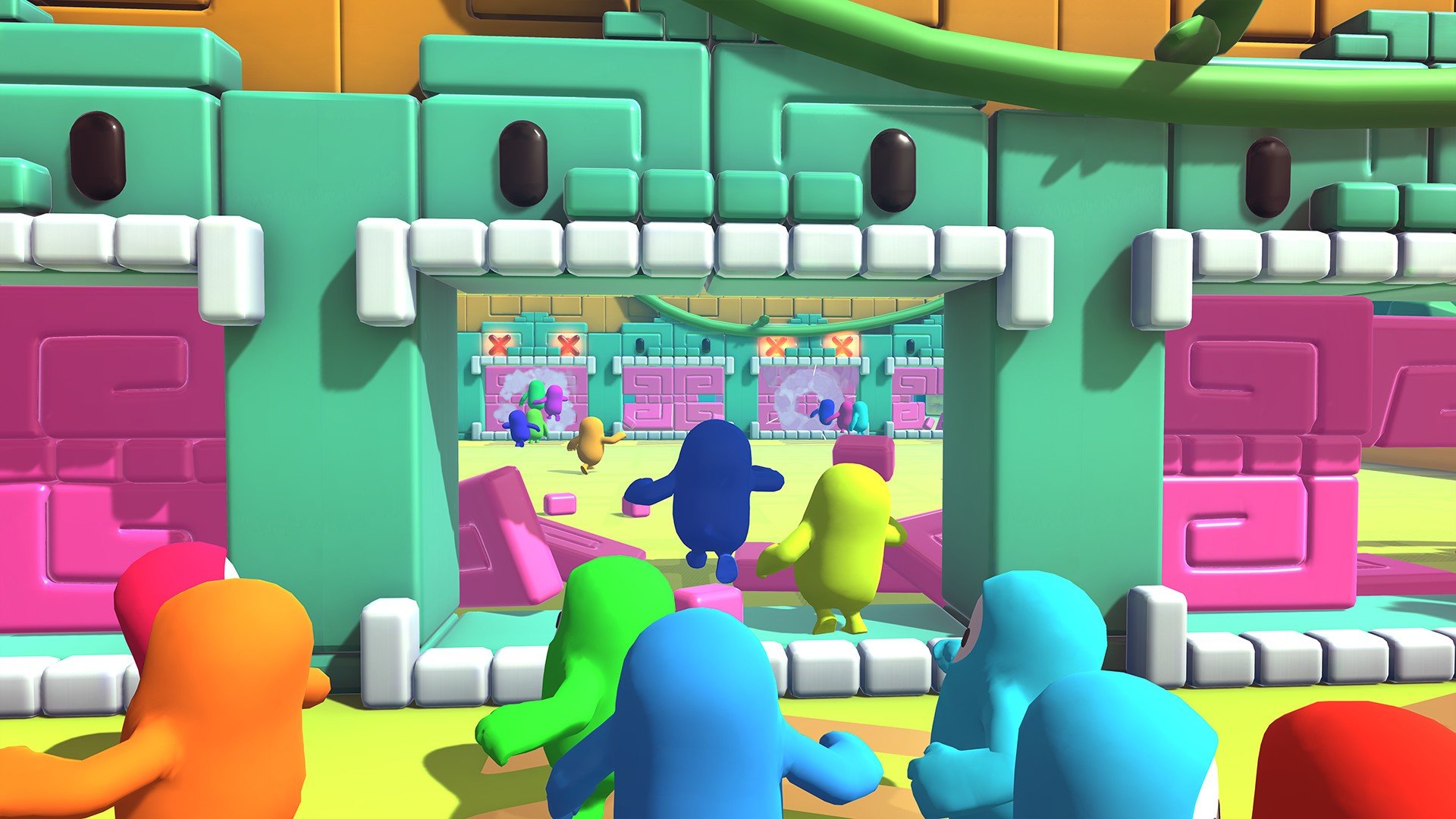 It wouldn’t be E3 2019 without a visit to Devolver Digital’s parking lot. Set across the street from the Los Angeles Convention Center, we found all the games available for demo in the Devolver lot contained to their own trailer area. What’s nice about this setup is the developers were given the freedom to design and decorate their trailers however they saw fit.

Prior to stepping into the trailer for Fall Guys, we were instructed to remove our shoes. Confused, we complied and were brought into the delightfully colorful trailer for Fall Guys. Inside, soft play furniture, bean bag chairs, and squishy foam floor tiles greeted us. On the walls, art and character design for Fall Guys complemented the room’s cheerful aesthetic.

With all of these factors setting the tone for the game we were about to try out, we eagerly grabbed a bean bag and dove into our first match. After losing the match in dismal fashion, we were able to talk to the game’s creative director, Jeff Tanton, to learn more about Fall Guys. Wondering when you can try the game out yourself and whether it’ll offer local co-op and customization options?

Read on to learn more in our full Fall Guys interview and why you should definitely keep an eye on Mediatonic in the future!

What sets Fall Guys apart from other battle royale games?

Jeff: We know battle royale is huge. We also know it’s a genre that’s pretty saturated at the moment, so if you’re going to do something with it, try to do something newer and unique and exciting. For us, we grew up with game shows like Takeshi’s Castle, MXC, Total Wipeout.

It just seemed obvious to us the idea of lots of contestants being whittled down to one and doing something really fun in the process – and very game-like in the process – was perfect. That’s where Fall Guys: Ultimate Knockout came from.

What platforms will Fall Guys release for, and how many people can play Fall Guys at the same time?

We just want to make sure you’re going to get some rounds that are perfect for 100 people like Full Chaos, and some rounds better for like 50 or 60, right down to the final 10 or 20 who need to take on a race for the crown at the end.

Will there be local co-op?

Jeff: Local co-op is so important to us. We’ve always seen, even for early builds of the game, being able to sit down and rip the person that’s playing alongside you. We absolutely expect to make sure there’s split screen modes that people can sit down together and both join a much wider game of Fall Guys.

What kind of customization options will be available?

Jeff: We really want to go super wide and deep with the customizations. I don’t know if you can see, I’m standing against a wall of some ridiculously customized Fall Guys at the moment. From the start, we wanted to think of these Fall Guys as a cross between football mascots and vinyl toys.

So stenciling, spray painting, getting some really cool logos and designs in there, all of that is super important. Beyond that, dressing them up, mixing and matching, and a whole bunch of costumes – regularly updated costumes – so you can make sure your Fall Guy is exactly the Fall Guy it needs to be.

How can other players sabotage each other while running through the obstacle courses?

Jeff: We don’t want it to be an overtly violent game, but in all of these obstacle courses you see a bit of rough and tumble. People pushing and pulling over each other, and we wanted to bring that into Fall Guys as well.

Yes, you can grab people, you can pull them back. We’re trying to avoid complete griefing, you won’t be able to grab onto someone and never let go. We’re still experimenting with what a shove means, how much power you can use to push into people.

Ultimately, it needs to be fun and we’re trying to find that perfect line where there’s griefing, but it’s not ruining the fun for everyone else.

Are there any incentives for being the winner?

Jeff: Beyond the respect of your friends and peers for the rest of time? Beyond that, you’re going to get credits which can be used to customize your Fall Guy even more to make sure you are the ultimate Fall Guy with a bunch of new stuff to help you stand out amongst the crowd.

What inspired the bright and colorful aesthetic for Fall Guys?

Jeff: We obviously want it to be bright and colorful and fun because once we decided we’re not going to do a battle royale that’s focused on guns and last man standing the playing field really opened up for us. So, what do we do with this? It starts with the Fall Guys themselves. They needed to look uniquely bad doing whatever it was we were asking them to do.

If we’re asking them to climb up something or run really fast or jump, we wanted to create a character that looked like that’s the last thing they could possibly do. When you watch these shows, they’ll dress people up in stupid costumes and that’s where the fun comes from. It started there, and once we had the Fall Guys, their world grew out from that.

The idea that you’re standing in a soft play jungle gym at the moment, that’s where we focused a lot of the design of Fall Guys once we had the Fall Guys in place. It was obviously the world they needed to inhabit – bright, colorful, fun.

Are there other modes or maps planned for launch?

Jeff: One of the nice things about Fall Guys is the idea of this shuffle. You don’t know which of the rounds you’re going to get just like in the great game shows where you have your favorite rounds, but don’t know if they’re going to pop up in that episode.

Will any single-player options be available?

Jeff: At the moment, we haven’t decided what single-player options would look like. Right now, the full focus is making sure that this 100 players with fall physics is as good and as fun as it can possibly be. We talked earlier about the couch co-op angle, and I think certainly in the future that’s something we’ll investigate. If people really enjoy what they’re doing in Fall Guys then obviously we’d look to expand upon that.

When can players expect the release of Fall Guys, and why should they check it out?

Jeff: You’ll be able to play the game in Q1 of 2020, that’s what we’re targeting. People should play it because it’s something different and it’s honestly wholesome and fun. I guess the best answer I can give you is you saw the Door Dash level and we had the roughest ideas block out of that. It was the first thing we built for the game.

We did our first online test back in Christmas thinking as long as it didn’t fall over we’d do one test and it’d go back our way. Two hours later, people were slamming their desks and asking to play through the same 30-second patch again and again and again. For us, that was the start where we realized we had something really special and really fun. The final game is going to be that times a hundred, so you should definitely play it.