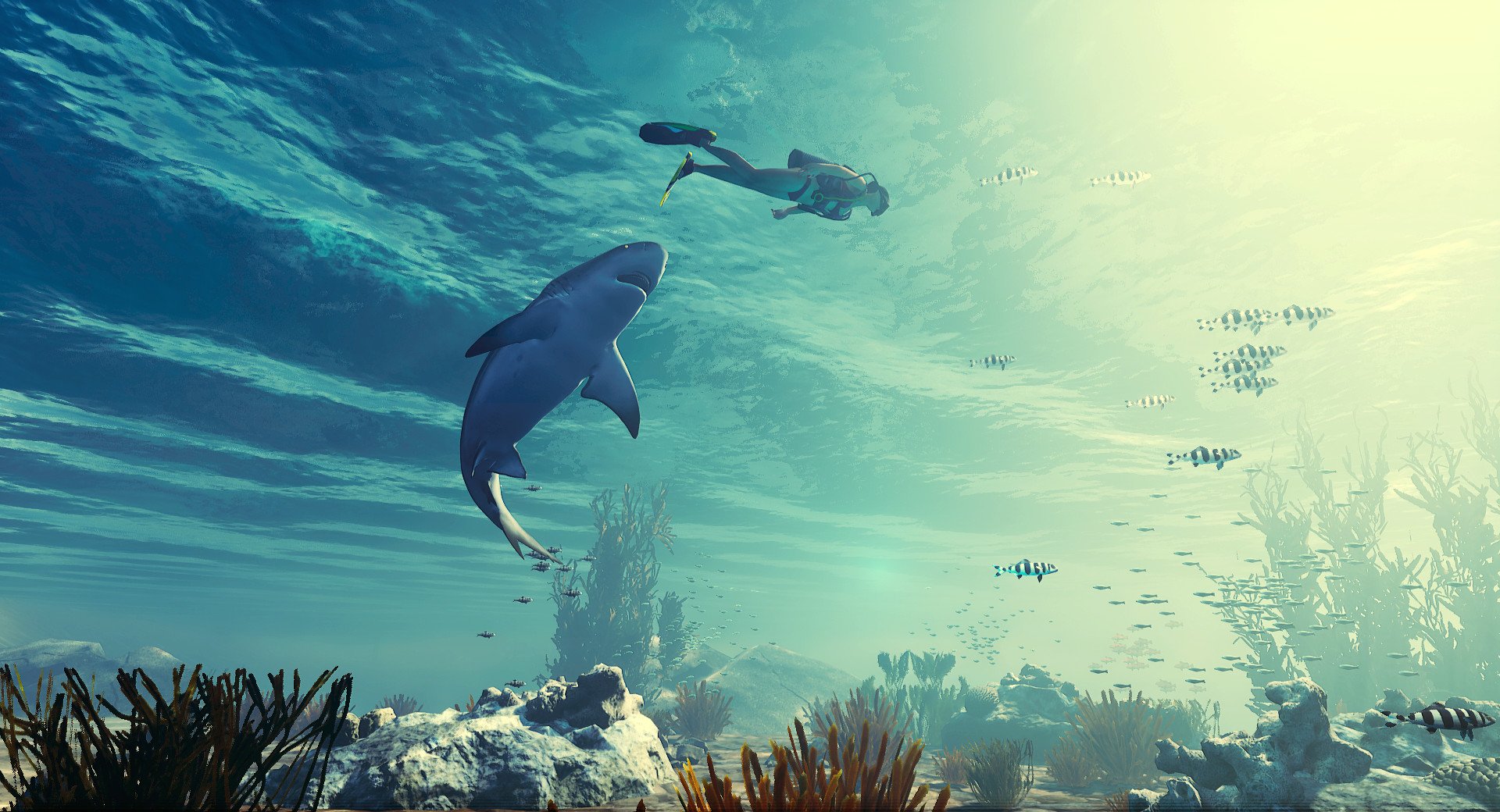 At E3 2019, we met up with the director of Maneater, Bill Munk. During our conversation, we learned a lot about the core premise of the game, the ways you can move around as a shark, what sort of rewards you get for eating people, and who’s responsible for voicing the game’s enigmatic narrator.

Touted as being “like GTA but with sharks” we couldn’t help but want to learn more about the craziness that is Maneater. Currently slated for an early 2020 release date for PC, Maneater offers open-world gameplay that’s truly outside of anything we’ve ever played before. Not only can you eat people, you’ll also do battle with wildlife and grow to become an unstoppable shark force.

As of right now, Maneater is slated for an early 2020 release sometime before E3 next year. While it’s only been announced for PC, a console release isn’t outside the realm of possibility according to Bill. For insides into what you can expect from the game, and how the team landed Chris Parnell as a voice actor, read on for our exclusive E3 2019 interview with Maneater’s game director, Bill Munk!

What is Maneater all about?

Bill: Maneater is an open-world action RPG – or as we like to call a “Shark-PG” – that takes place on a reality TV show called Sharkhunters vs. Maneaters. It follows Scaly Pete, the ultimate shark hunter, and you the bull shark. You start out as a little baby and you’re growing and trying to survive this harsh ocean to become a legend of the sea and get revenge for what Scaly Pete did to you.

Can you play as different shark types?

Bill: The reason why we picked the bull shark for Maneater is because we’re in a fictional Gulf Coast, so there’s freshwater and saltwater, and a bull shark can actually survive in freshwater. That was a really big driving force even though we’re kind of bending the rules. We’re not trying to be a simulator, but we still want to be semi-grounded. Kind of like Jurassic Park science. You can only play as the bull shark, but you will fight and encounter many other types of sharks.

What rewards do you get for eating animals and people in Maneater?

Bill: Everything that you consume has nutrients and there are four different types of nutrients: Protein, Fat, Minerals, and a rare Mutagen-X. Mutagen-X is needed to help you evolve past what nature has intended. Everything you eat makes you grow bigger. When you consume stuff you’ll slowly get bigger and bigger, and then you’ll eventually hit a life stage.

There are five life stages in the game: Baby, Teen, Adult, Elder, and Mega. Whenever you hit your new life stage, evolution slots open up. With things that you find in the world through exploring, or creatures that you defeat, you’ll get evolutions that you can slot onto your shark for cool new abilities and to customize it the way you want to play.

Can you tell us a little more about the shark physics?

Bill: We have this really cool feature called Floppy Fish Physics, so when you’re on land the shark is floppin’ around. In our game we want water to be really fun, we want on the land to be really fun, and on top of boats. As you saw, I can land on the boat and I’m floppin’ around all hilarious eating people and tail-whipping them. You can shimmy on the side of the boat and grab the driver out. We’re just having a lot of fun with it.

The announcer sounds familiar. Who is he, and where have we heard him before?

Bill: One of the things we wanted to do with this reality show is we really wanted to have a National Geographic vibe to it where someone’s talking about your actions in a very serious manner, even though it’s so silly. And we were trying to think who would the perfect actor be?

We didn’t think we’d actually be able to get him, but we were like, “Chris Parnell would be the perfect person to fulfill this type of vision and direction we’re trying to go.” Luckily, he was super excited, he loved the material.

It’s been super fun to be able to work with him, especially as someone who looks up to all the stuff that he’s done. I love Rick & Morty, Archer, and 30 Rock, he’s hilarious. We’re super, super happy to be able to have him.

How does announcer impact and complement gameplay?

Bill: The inspiration of it was from Bastion or Darkest Dungeon. You know when you do your actions and the narrator talks about it? It’s really pleasurable and feels really cool.

We’re using that to be a tool to tell people what they should look for in an area. We have tons of variation in our lines. To give you an example, randomly eating people, we have over 90 different lines Chris Parnell can say to talk about that situation.

All your actions that you do, he will talk about it. When you get to an area, he might let you know, “Hey, there might be something here.” It’s just a fun way of leading people through a game without being heavy-handed or boring.

Bill: Our writers do a bunch of research. I mean, we’re not trying to make an educational game, but it’s fun to learn things you didn’t know in a very entertaining manner. Are there wildlife threats to encounter? Bill: Each region has different types of wildlife that exist there, and there are actually baseline predators like sharks and fish.

When you’re consuming the food source in that region, there’s a competing apex predator that also needs that food for them to grow and evolve. When you eat too much of that, that’ll bring them out and you have to battle them. Each one of the apex predators also has special evolutions that you will get and will be able to apply to your shark.

Are players free to explore anywhere they want to in the world?

Bill: In our open-world experience, you first start out as a baby, and you have this one area that’s kind of like your training ground where you can really learn the game. Once you’ve learned some things and you grow to the teen level, that’s when the full game opens up, and you can explore anywhere.

In each region, there are threats you’ll be able to handle, and there will also be things there are no way to handle unless you’re super elite, so you’ll actually want to backtrack to fight. For example, in the demo that croc – even at adult size, it’s really difficult to beat. You’ll have to wait until you’re at least elder or mega size to really be able to beat it.

What kind of shark abilities will you acquire as you level up?

Bill: One of the big challenges with this game is that in most other games, your character has two hands and they can pick things up. This is a shark, but we wanted to have more than just bitey-bitey, die. A couple of things we’re ready to announce, at least right now, is obviously you can bite things but you can also clamp onto them.

If you are big enough, you can use a skill called Whipshot. With that, you can throw something out of your mouth and tail whip it like a projectile weapon. Each thing you pick up, like in a first-person shooter with a shotgun or assault rifle, becomes a unique weapon. For instance, a swordfish, if you pick that up in your mouth you can shoot it out.

You can pick up an exploding barrel, or things that might have more impact damage. There’s another ability we have called Thrashing where, if you have something in your mouth, it will try to break out of your mouth. If you Thrash it, it’s a way to tire it out so you can finish it off. One of the interesting things is that all of the things you can do, the wildlife can do to you as well. If they are bigger than you, you really have to be careful because if it bites onto you, it’s going to take you with it. It’s going to be able to throw you around and thrash you.

Why do you describe Maneater as being like GTA but with sharks?

Bill: The reason why we use the example of GTA with sharks is that it’s such a different type of game. But as you saw in the demo, it’s very open-world, third-person perspective and just like in GTA when you cause trouble, the cops come and you battle them. In those aspects, it was a way we felt we could very quickly and in one sentence have people be able to grasp what this crazy game Maneater actually is.

Are there plans to release this game on other platforms besides PC?

Bill: We’ve announced PC and that’s all we can announce right now, but we were playing it on controller.

What’s the release window for Maneater?

Bill: Our release window right now is before E3 next year. Any time within that range.