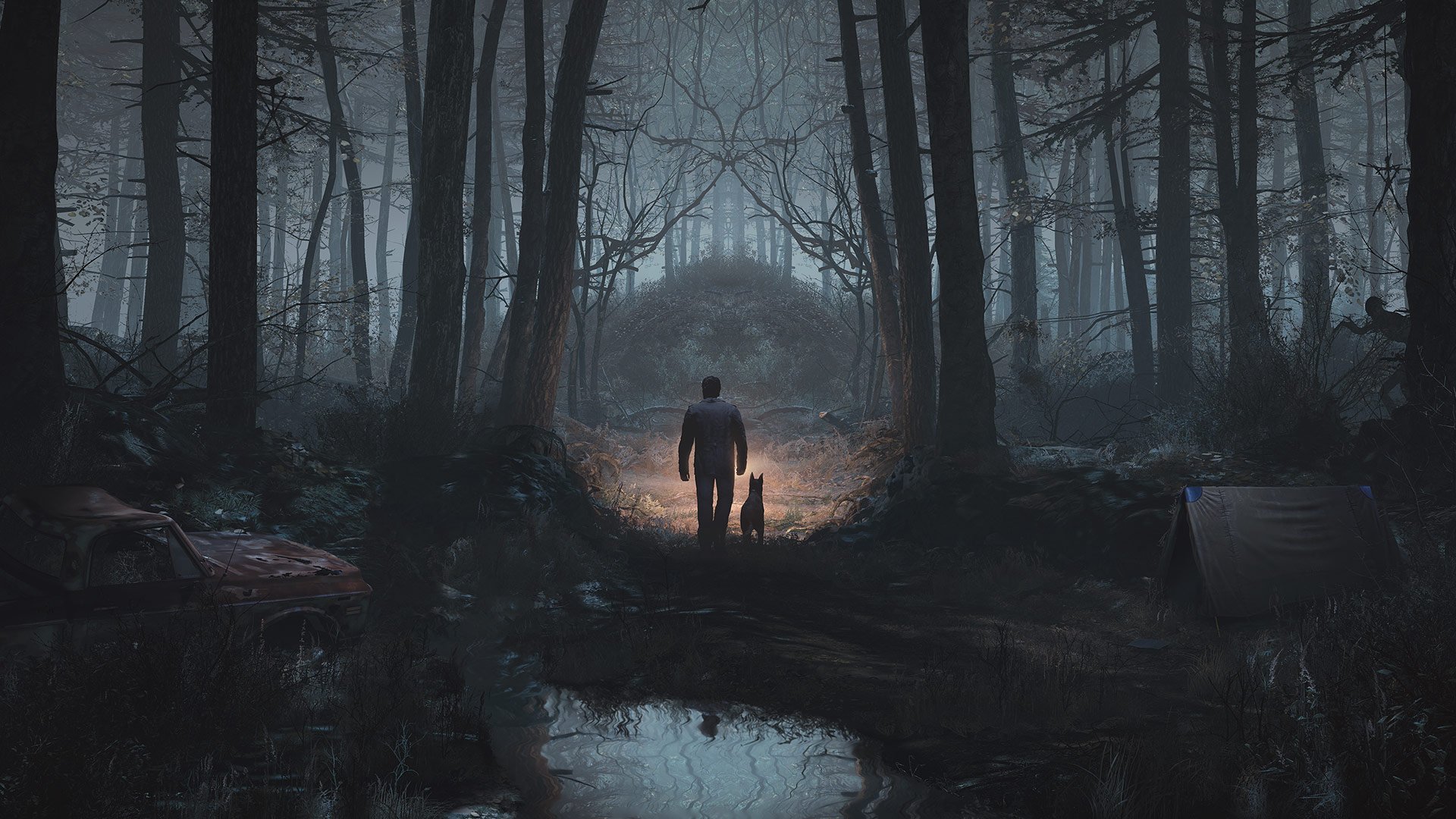 One of the more surprising reveals at E3 2019 was a trailer for a new Blair Witch game. Developed by Bloober Team (Layers of Fear 2, Observer), Blair Witch looks to offer a unique take on concepts first introduced in the 1999 cult film. At first glance, the game seems to almost serve as a sort of sequel as it’s set in 1996, two years after the documented events of the 1999 film (where the footage was filmed in 1994 but found a year later).

In the game, former police officer Ellis and his dog Bullet are called upon to investigate the disappearance of a boy near Burkittsville, Maryland. As Ellis digs into the investigation, he uncovers more than he bargained for thanks to the supernatural forces that infest Black Hills Forest. According to Bloober Team, you don’t need to watch any of the films to understand and enjoy the Blair Witch game.

Can you introduce yourselves?

Maciej Glomb: My name’s Maciej, and I’m a team developer at Bloober Team.

Barbara: And together we are working on Blair Witch.

What inspired you to adapt Blair Witch into a video game in 2019?

Maciej: After Observer in 2017, we were looking for a new project for the team. At the same time, Lionsgate was looking for someone to portray the Blair Witch universe in a video game, so we started a collaboration. One thing we have in common is that both Blair Witch and our games try to manipulate the environment around you so that you’re never sure what’s behind or in front of you. I think that was something that really connected us. And what’s more, this year is the 20th anniversary of Blair Witch, so we thought that this would make this collaboration even better.

Will the game be connected to the films at all?

Barbara: The game is connected to the Blair Witch cinematic universe, but at the same time it’s our own take. It’s our own original story that has some connection and takes place in the same forest, but other than this, it’s its own story. You don’t need to watch the movie to understand what is happening because this will be our own take – Bloober’s take – on what can happen in Black Hills Forest.

Will there be another Blair Witch movie?

Can you tell us more about the main protagonist and his dog, Bullet?

Barbara: The protagonist of the game is Ellis who’s a former policeman with a past of military service. He and his friend, Bullet, will enter the forest and try to join the search party for a missing boy. But finding the rest of the team is not that easy and, well, the Blair Witch stuff happens.

Maciej: Bullet is less susceptible to the Witch’s curse, so he will sometimes see things or hear things that you don’t. It’ll be very important to bond with him as much as you can. You’ll also be able to give him some different commands during the game so he can help you in the most efficient way. At the same time it is an AI, so he will also behave on his own.

Barbara: We didn’t want to make him [Bullet] just a tool to achieve some gameplay goal. We wanted to make him important both as a gameplay mechanic and as a character in the story. We really needed to balance out how he behaves because if he would behave like a real dog we would have a problem with using him during the gameplay, and if he would be just a very smart AI, he would be boring as a companion. We believe that we achieved a balance where Bullet is both a very friendly animal, and a great help for all the players.

Maciej: With our previous projects like Layers of Fear and Observer, I think we established how we want the psychological horror genre to look like. We want to build on that further. At the same time, we don’t want to get a bit stale. We want to change, to grow, all the time. That’s why we added a few new mechanics to the Blair Witch game. It’s more psychological than survival, so it won’t play as Outlast.

For example, we added Bullet, which is our first time creating an AI in our company. It’s also the first time in our games to have combat. We also focused on the camcorder which is a very iconic item in the Blair Witch cinematic universe, not only to watch recordings that you find along the way but, for example, to solve different puzzles. Puzzles that will be connected to the story of the game.

Maciej: That’s something that we don’t want to spoil before the game launches because we know that it’s a significant part of your first playthrough that you don’t know. It’s definitely something we want to keep secret as we did with the trailer.

Bloober Team is based out of Poland. Have you seen the gaming scene there grow at all with studios like CD Projekt Red?

Maciej: Ever since The Witcher appeared on the market there was a sudden growth in the game industry in Poland. That’s why we have Cyberpunk 2077, we have Dying Light 2, we have Blair Witch. The game development scene in Poland is growing really fast and it’s really dynamic and it makes things all the more exciting for us.

What consoles will Blair Witch release on?

Maciej: For now we are focusing on Xbox and PC, but probably in the future we will consider other platforms but it’s something to discuss in the future.

Why should people check out Blair Witch?

Maciej: Because it’s scary as shit!

Barbara: Blair Witch was a movie that changed the very essence of horror and how we perceive horror, and started the found footage trend. Although our game is not just a recreation of the movie, it’s still worth checking out, it’s still worth knowing a new story in this iconic universe.