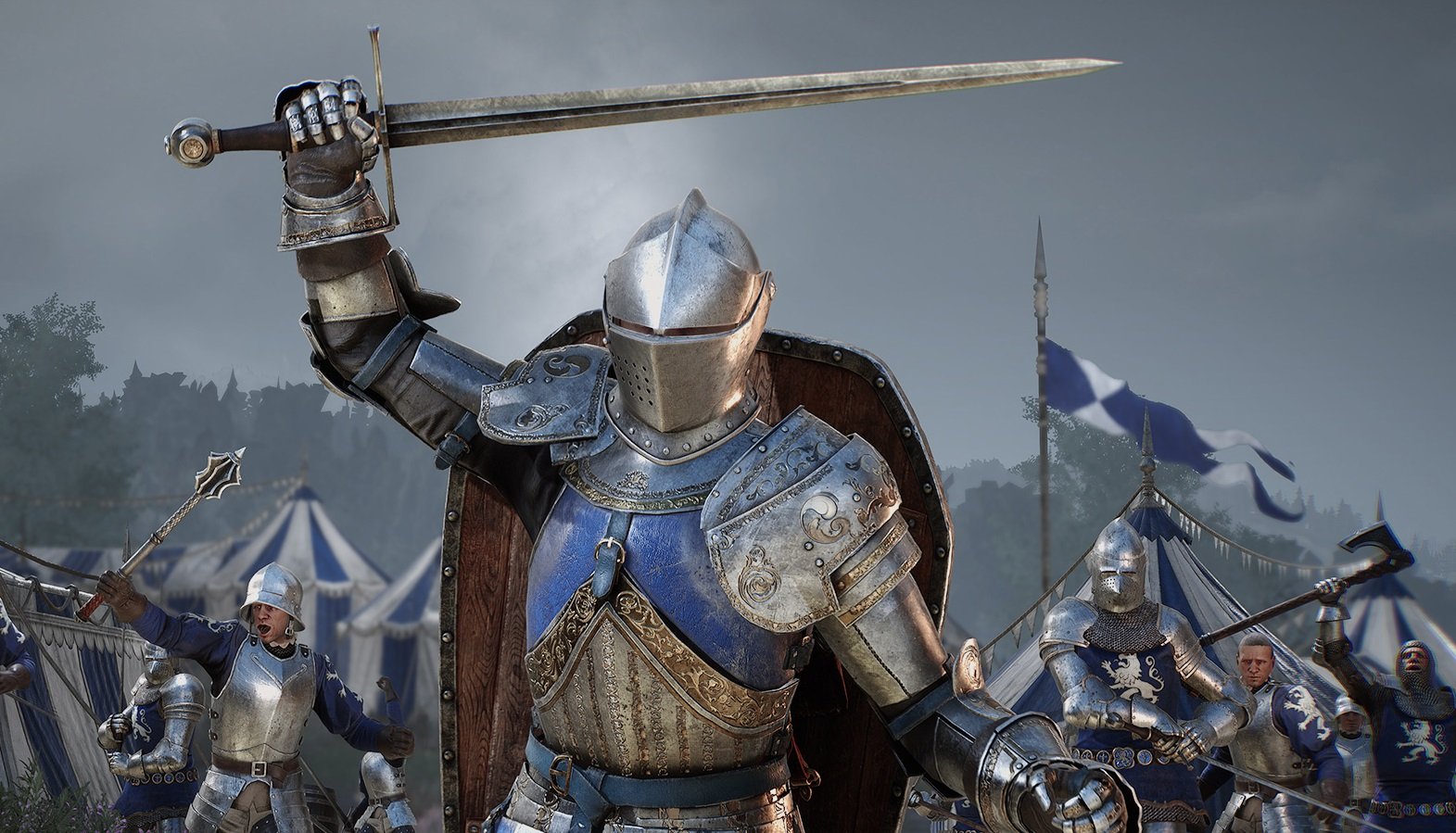 At E3 2019, Torn Banner announced their next project, Chivalry 2. Serving as a "true sequel" to 2012's Chivalry, Chivalry 2 aims to offer cinematic medieval combat on a grand scale. New to the game are battles supporting up to 64 players, mounts, and more ways to troll opponents including brand new audio emotes.

After watching the reveal trailer and reading the new FAQ posted by Torn Banner, we found ourselves curious about what new additions players can expect, why the game will release as an Epic Store exclusive, and how the game will differentiate itself from the spin-off hit, Mordhau. Sitting down with Steve Piggott, President of Torn Banner Studios and Lead Creative Director on Chivalry 2, we were able to ask these questions, and were given renewed hope that Chivalry is not dead.

Chivalry 2 will launch as an Epic Store exclusive. Why did you decide to go that route? Did Epic approach you or did you approach them?

Steve: I think going with the Epic Games Store is a decision that looks a lot dumber today than it will a year from now. We know the guys at Epic really well, and we have a lot of information that the public doesn’t have right now that we can’t get into, but we’re really confident that the store we’re going launch on will be a lot better than it is today.

What are your thoughts on the Epic Game Store as a whole? Do you think that you guys would have been able to make Chivalry 2 the way that you want to without Epic’s partnership?

Steve: The Epic partnership for us worked out great because it’s what allows us to make Chivalry 2 the way that we want to. I mean we can do this without compromise essentially. They put a significant investment into the game and really let us take things to a totally new level that we wouldn’t be able to without it.

Can we expect the original Chivalry to release on the Epic Store?

Steve: We haven’t talked about that yet.

In the FAQ, it's mentioned that development began back in 2017. What inspired you to work on Chivalry 2 after games like Mirage?

Steve: We always wanted to get back to Chivalry 2. This franchise is what the studio was built on, it’s our core love and passion. I mean, the main reason we didn’t do Chivalry 2 right after Chivalry 1 is because we don’t want to be like a sports title that releases iterations of a game that don’t bring substantial improvements each time. We wanted to approach it when we could do a true sequel and that’s what we’re doing now with Chivalry 2.

Chivalry will have new, enhanced swordplay. Will feints, drags and spins still be present and can players expect any new mechanics to master?

Steve: We have redesigned the combat animation and movement systems from the ground up again, but the game will be familiar. It is a new system and we’ve done everything that we can to make sure every action is physical, feels fair, and readable to the players. Some of those mechanics exist, but they’re fundamentally different to the way they were in the first game and we’ve really tried to address the issues.

What about classes? Will Chivalry 2 offer the same classes as the previous game, like Archer, Vanguard, Knight, and Man-at-Arms, or will there be new classes?

Steve: We do still have the four class archetypes – the Archer, Man-at-Arms, Vanguard, and Knight – but there is a little bit more to it that we’ll talk about later.

New to Chivalry 2 are mounts. Can you explain a bit about how mounts will work in battle. Will swordfights on horseback be possible?

Steve: Yeah, absolutely. These are horses, these are thousand-pound beasts that we’re bringing onto the battlefield, they’re not motorcycles. You’re gonna be able to feel like you’re truly in control of your horse, and fighting on horseback — not just in a drive-by scenario — which is a core part of the game.

The original Chivalry dabbled a bit in cosmetics. Will there be any character cosmetics in Chivalry 2?

Steve: Yeah, we’re not talking about the system today, but as people saw in the trailer there are some fancier armors. Becoming a heroic warrior on the battlefield and looking the part is a big part of the game as well.

Are there any customization options in Chivalry 2. Will players be able to customize their weapon loadout?

Steve: There’s a huge variety of gameplay and player choices. We really want you to be able to create the playstyle that you want to. I mean all of your favorite movie characters, you should be able to essentially feel like you are them. That’s our goal.

Another thing that players have been curious about is whether or not Chivalry 2 will offer any kind of single player experience. Are you considering adding a campaign to Chivalry 2 as well?

Steve: That’s not something we’re talking about just yet.

What can players expect from in-game lobbies and multiplayer in general. Will there still be servers? Can they still set up custom duel servers?

Steve: I think that we’ll have the server browser and we’ll have both official servers and community servers.

Just to confirm, you guys are planning to release Chivalry 2 on other platforms as well after the period of exclusivity?

Steve: That’s right. After the one year on the Epic Games Store we’ll go to other platforms on the PC.

Will there be any sort of beta testing for Chivalry 2?

Steve: We’re definitely going to do some alpha and beta testing on Chivalry 2 but we haven’t released the details on that yet. There is a newsletter sign-up on the website and that email pool will be the same pool that we use for alpha sign-ups.

Chivalry 2 has a 2020 release date. We were wondering if there are any other clues to when players can expect Chivalry 2?

Knowing that you’re looking at a 2020 release date, have you considering releasing Chivalry 2 to next-gen consoles like Project Scarlett as well in the future?

Steve: That’s not something we’re talking about, but obviously interesting.

Are there any new dialogue options?

Steve: That was one of the core things that people loved about the first game, the ability to roleplay different characters with the VO and the battle cries. Again, we’re trying to do a true sequel approach where everything is totally remade and brought to the next level and that’s part of that too. There’s an expanded range of emotes and there are way more character voices and each character has way more lines and contextual lines. I think players are going to have a lot of fun being silly in Chivalry 2.

Will the same voice actors from the original Chivalry be returning?

Steve: There will be at least one voice returning from the previous game and we’re definitely bringing the spirit of how we captured those voices to the next game. We know that’s an essential part of the brand identity and we’re capturing well again for sure.

Will there be a soundtrack or background music in Chivalry 2?

Steve: Absolutely. For us it’s everything that we can do to remind players of their favorite medieval, Hollywood movies, so epic medieval music is our goal.

Chivalry 2 will have several new features on the battlefield like being able to pick up a chicken and throw it. Can you talk about what other surprises players can expect?

Steve: This time around the battlefield is littered with props for players to grab and make use of as they can. You can grab a pitchfork or shovel, or a chicken, or a rock, I mean just anything you can find. It really adds a lot of variety to the gameplay because you’re constantly grabbing what’s around you and seeing what you can do, both humorously and competitively with your environment.

Finally, if you're willing to talk about it, what are your thoughts on Mordhau?

Steve: It’s kind of amazing to have a game spawn out of your game, like our community went and made that game and they’re doing great. That’s awesome, we’re very excited for them. Competition is always great. For us, the way we see it is that what we’re doing with Chivalry 2 is a complete relook at how to deliver the ultimate medieval battle experience. While we respect what everyone else is doing in this genre, we think that what we’re doing is more ambitious than what other people are doing right now.