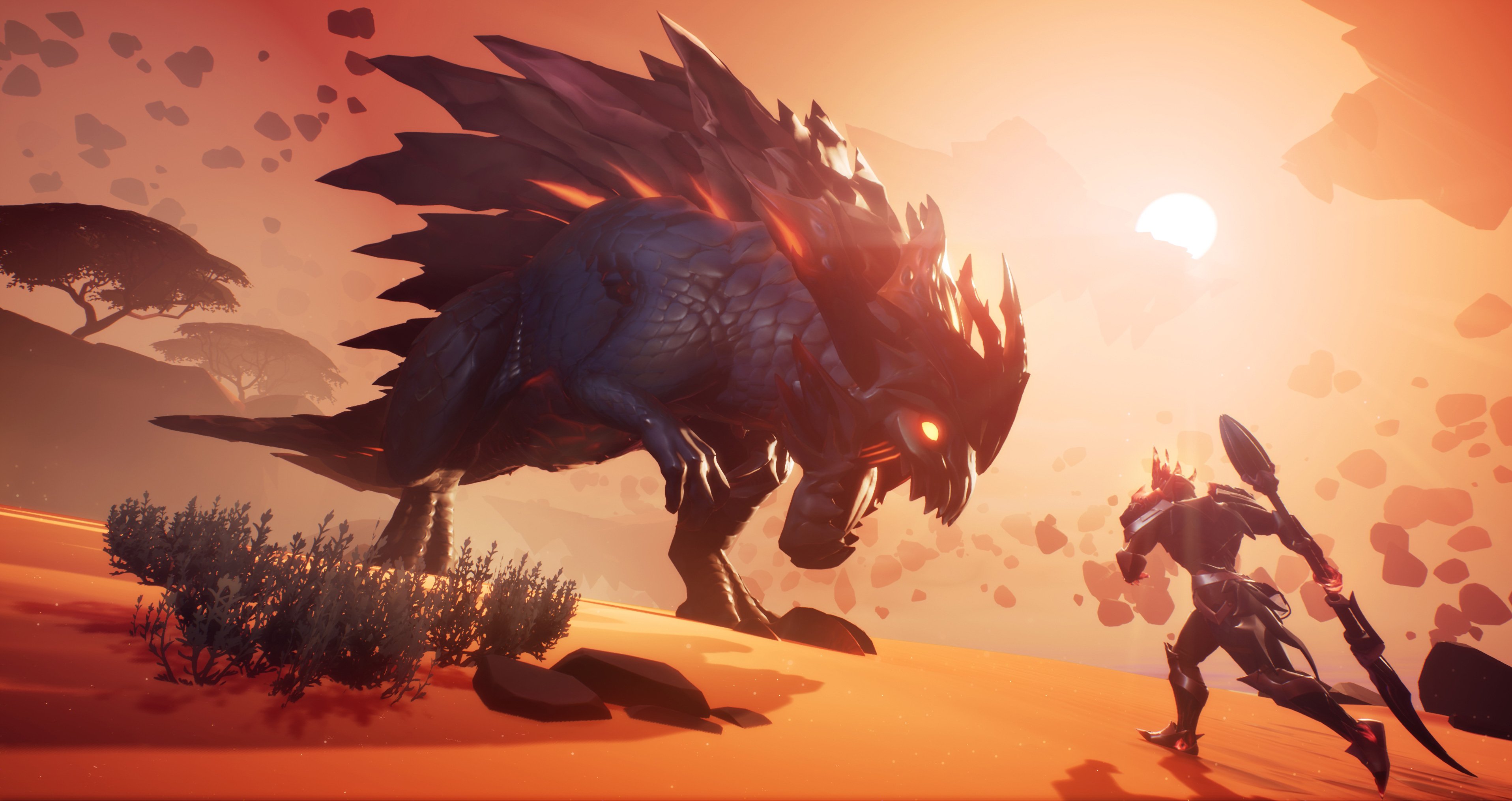 If you've just noticed Dauntless appearing on your console of choice, you may be tempted in by the free-to-play Monster Hunter-like. Fans of the beast-slaying genre will likely know most of the usual gameplay beats, but there are still a few Dauntless tips and tricks for beginners and veterans alike. And with Dauntless being cross-platform for PC, Xbox One and PS4, there's plenty of reason to invite your friends to join so you can teach them the ropes, too! But first let us introduce you to the world of Ramsgate and the floating isles filled with Behemoths and Aether, as we introduce you to a few Dauntless tips that will make your start with the game go a lot more smoothly.

The main loop of Dauntless is you embark on a hunt (solo or in a team), you slay a beast, you collect resources, then you come back to the hub world of Ramsgate to improve your weapons and armor before heading back out on the hunt. You complete Quests and return to the NPC who gave them to collect rewards, there are also weapon- or Behemoth-specific Masteries you complete over longer periods like Challenges in other games.

There are armor and weapon sets based on each of the game's Behemoths (big monsters you're protecting everyone from) and you use increasingly rare parts of these monsters to upgrade these weapons and armor.

There's no traditional experience progression, you don't get stronger just from beating a monster, you have to choose which gear to upgrade to improve your power level. Some Behemoths will be elemental, therefore in Dauntless elemental strengths and weaknesses can be exploited to deal more damage and reduce the damage you take if you plan your loadout carefully.

There are six weapon types in Dauntless: Axes, Chain Blades, Hammers, Swords, War Pikes and Ostian Repeaters (guns). Each of these types has multiple versions based on the Behemoths you slay, so you can build a Chain Blade or a Sword based on the Embermane (the first firey Blaze Behemoth you fight) and it will be imbued with fire-type damage.

Axes, Chain Blades, Swords and Ostian Repeaters deal Slashing damage, which is used to break off Behemoth parts more easily (important when farming for resources to upgrade your weapons).

Hammers deal Blunt damage, which is also called Stagger damage, if you do enough of this damage you'll stun a Behemoth allowing for some free hits.

War Pikes deal Piercing damage, which builds up on specific body parts until they are Wounded, which increases the amount of damage that body part takes from all sources of Slashing damage on your team.

It's important to co-ordinate with your team to make sure you have a good mix of damage types and someone capable of staggering the Behemoth. It helps to know how how to interrupt Behemoths in Dauntless as that will also give you a window of free damage.

Which weapon to choose in Dauntless

Each weapon has their own moveset, which can be viewed by the Move List option on the far right of the game's main menu. Many depend on the weapon's Special, which can be unleashed after charging a meter in the top left by landing hits on the Behemoth. Here are some quick tips so you know how to make the best of each weapon type, and what playstyle they suit:

Axes: Heavy hitter, medium-slow swings. Does Slashing damage, so good at chopping off monster parts and also deals bonus damage to wounded parts. Build up meter and then use the special to throw the axe, use it again to recall the axe. Good for people who enjoyed playing as Kratos in God of War on the PS4.

Chain Blades: Very fast hitter, light damage but mix of short and long range attacks. Slashing damage to chop off monster parts and deal bonus damage to wounded parts. Special acts as an extra dodge/dash, allowing you to backflip away from or teleport close to the Behemoth. Hit 3 times with primary attack and then hold down secondary for an infinite chain blade whirl to deal damage as long as your stamina bar lasts.

Hammer: Heavy hitter, slow swing. Does Blunt damage, smash the Behemoth in the head to stagger it. Secondary attack is a cannon. Special allows you to reload the cannon with an active reload timing on second press. You can also hit secondary attack just before primary attacks land to consume ammo to deal extra damage on swings. Also launch yourself into the air for devastating slam combos.

Swords: Moderate damage, medium-fast swings. Does slashing damage, good for chopping off monster parts. A basic weapon with fast and heavy attacks which can be combo'd into each other. Hitting builds meter which you can spend on an elemental burst, powering you up with AOE slash damage. A good starter, if not very flashy.

War Pike: Moderate damage, medium-slow swings. Does piercing damage, good for wounding parts so your team can do more damage. Primary attacks are stabs which deal pierce damage, secondary attacks are wide swings dealing slash damage. Both have their own combo finishers, but can be combo'd together for longer strings. Wound parts with stabs then switch to slash to take advantage of the wound bonus to slashing damage. Building meter and tapping special allows you to store energy into projectiles, which can then be fired by holding the special. Projectiles deal slashing damage so aim for wounded parts.

Ostian Repeaters: Slow-firing dual revolvers. Deal slashing damage, so aim for wounded parts. You have 12 shots before you need to reload. Your effective range isn't infinite, and also if you reload right next to the Behemoth you'll steal some of its energy to become Empowered, which doubles your damage output, so try to stay close. The Repeaters can be outfitted with several different parts which change the elemental damage type, special type and secondary fire mode. There are also Prisms that can be installled to add extra bonuses. You can play this as a support class for your team if you equip a Lantern and mods that share shields and other bonuses with team members nearby.

Weapons are first made by using parts from the Behemoth they're linked to, but after that you'll likely need a resource called Orbs. The best way to get orbs in Dauntless is head out on Patrols, which give you a daily bonus. After you've upgraded to +5 you'll need rarer Behemoth parts from stronger versions of the Behemoths you killed to make those weapons.

As there are elemental weaknesses and strengths in Dauntless, you'll want a strong basic neutral weapon that you can use for any difficult encounter without having to spend a lot of resources upgrading every single elemental weapon. Pick the weapons you enjoy using and only upgrade them to start with, this will help you progress faster. Also make sure that you check every quest marker (!) in town before going out on hunts or patrols, as the resources they give you can often be very useful in upgrading gear. Golden ? markers on the compass at the top of the screen are ready to turn in completed quests.

Later into the game you'll need a bit more power to take on Behemoths. You can tailor your build to each encounter by equipping your weapons and armor with Cells. Cells can be found in the Cores that you are given as rewards when you complete certain quests or Masteries. Take Cores to one of the fonts dotted around town to open them. If you have several of the same core, take them to the mysterious Middleman near to the docks and you can fuse them into a better version of themselves (you'll need to wait 22 hours or pay some premium currency, which isn't a problem if you do it every session).

Cores add bonuses to your equipment, and by thinking about your playstyle you can make a pretty powerful build. Some give you extra damage if you avoid taking damage yourself, perfect for Repeaters who skirt the edge of the battle without getting into the thick of it. Others stop you taking annoying elemental damage statuses like Shocked (which prevents you using items or reviving team mates). To start with, just equip anything that gives you more damage or health and you'll survive long enough to learn the intricacies of which Behemoths need which builds.

If you need any more Dauntless tips, check out some more of our guides and we'll help make a slayer out of you yet, recruit!