Voice actors and cast for Borderlands 3

Want to know who voices which character in Borderlands 3? We've dug out the voice actors and cast who are confirmed so far. 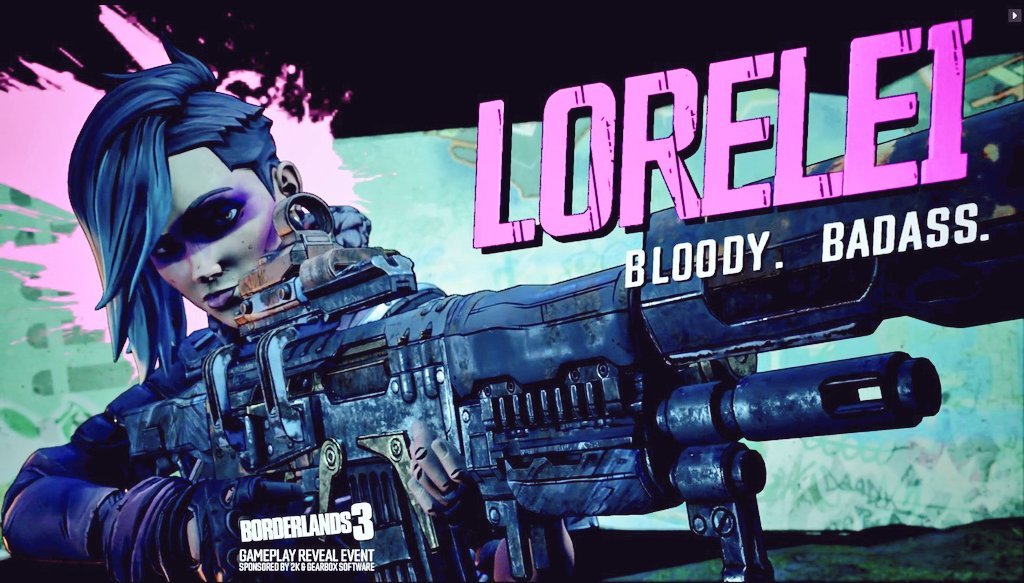 Who is Lorelei in Borderlands 3?

Bloodstained's long-awaited release date comes with an extra side of sass from Castlevania dev Koji Igarashi.

Borderlands 3's Lorelei, the sweary British NPC we saw kicking ass and drinking coffee in the Borderlands 3 gameplay reveal, is something of an enigma. Gearbox has said that the player will be spending "quite some time" with Lorelei, and with a mouth like that we don't mind them tagging along. Here's what we know so far about who Lorelei is and what role she'll play in Borderlands 3.

Who is Lorelei in Borderlands 3?

First up, who voices Lorelei? That's an easy one, as we've found LGBTQ+ actor and artist Ciarán Strange is Lorelei's voice actor for Borderlands 3. He’s been a guest actor in several shows including the world's first trans* sitcom The Switch, and I Am Tim. You may also recognize him as a background actor in Supernatural, Almost Human, and the Hallmark original A Ring By Spring. For any other Borderlands 3 voice actors you might recognised check out our full list of confirmed cast.

Now onto the trickier question of who she is in the game world. The player encounters Lorelei in Borderlands 3 when they land on Promethea and head to the Meridian Metroplex. Lorelei is kind of the boss around there, and sends the player off on a coffee run to get her troops hyped up before taking on Hyperion and whoever else stands in their way. You can see the whole side mission that Lorelei sends us on below.

Seems harmless and friendly enough, though some fans have speculated that Lorelei is named after the large rock of the same name on the banks of the German river, the Rhine. This rock is notable as in folklore it was said to have been the home for Lore Lay (adapted from the Rhine dialect for murmurming and the Celtic term for rock) who was a beautiful woman whom bewitched sailors to their death.

This folkloric story is better known as the tale of a Siren (see where we're going now?) who would use their beautiful voice to entrance and lure unwitting shipmen to crash upon the rocks they sat on. We're not saying that Lorelei in Borderlands 3 is secretly a siren, and will betray us at some point in the story, we're merely hinting at it.

All we really know about Lorelei in Borderlands 3 is that she'll kill if she doesn't get coffee, and she has an impressive reptoire of swear words.