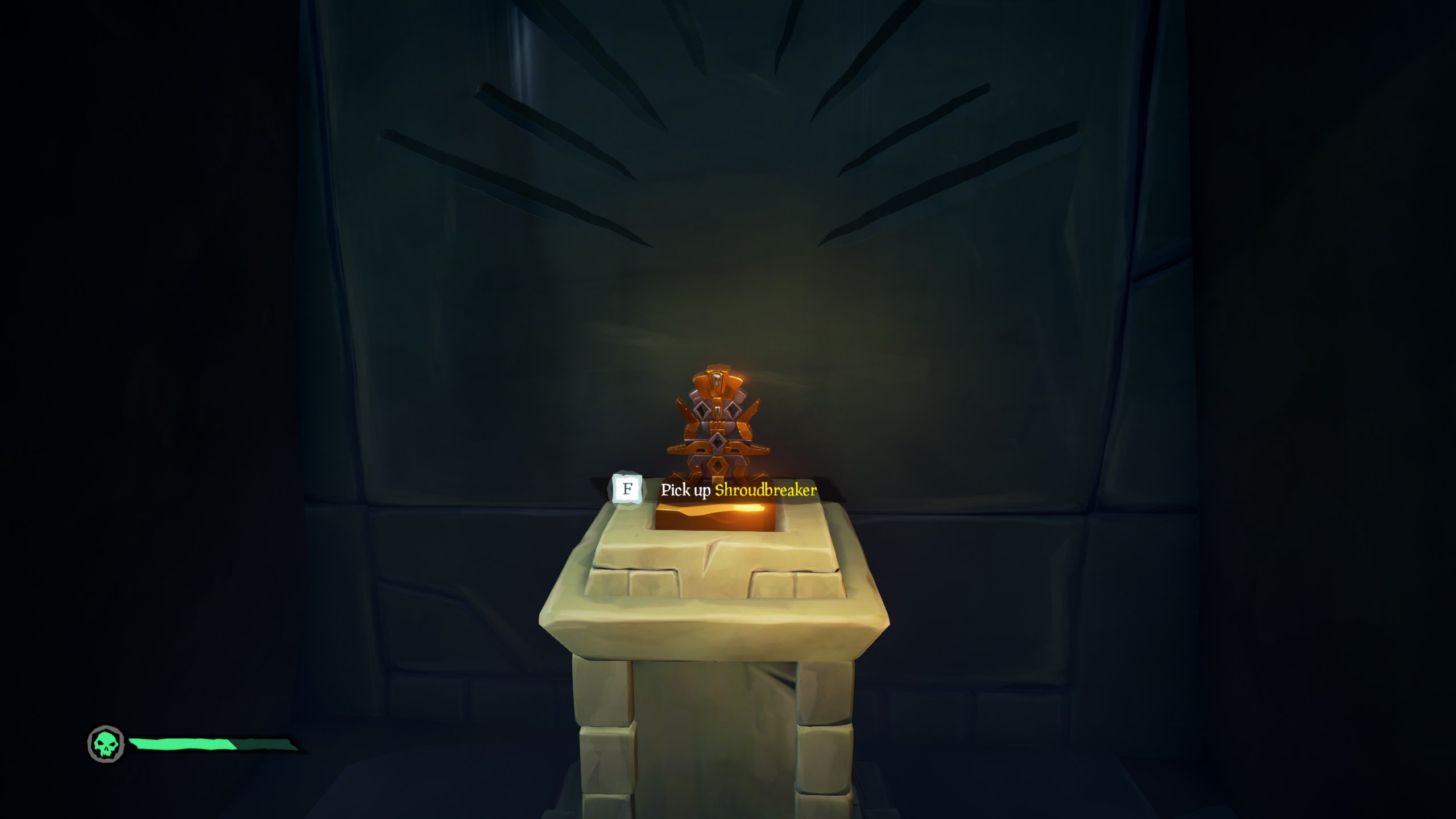 How to find the Shroudbreaker in Sea of Thieves' Tall Tales

Learn how to fish in Sea of Thieves and you'll be hauling in big catches to eat or sell in no time at all.

Now that Sea of Thieves’ Tall Tales have arrived, you’re off to find the Shroudbreaker as part of your first story voyage! The legendary relic is said to part the fog that surrounds the Shores of Gold, which we very much want to see. If you need help finding how to start the Tall Tale, look no further, but if you’re already on your way then read on for some helpful tips on getting the Shroudbreaker.

Where to find the Shroudbreaker in Sea of Thieves

Firstly, once you’ve got the Pirate Lord’s journal off the Mysterious Stranger, head to the point described in the book. Halfway between Crooked Masts and Old Crook’s Hollow there’s an unmarked island reef. Anchor up and head beneath the waves to find the wreck of the Magpie’s Wing. In the captain’s quarters, in the broken stern of the ship, you’ll find a book placed neatly on a coffee table. It’s the Ship’s Log!

How to find the Ancient Chest

Now that you have the Ship’s Log, you can work back to where they dumped their cargo overboard while being chased by some baddies. The directions point to a shallow island, so off you sail to Cutlass Cay. To the North-East of the island, anchor up and dive beneath the waves once more. You’ll see something shimmering among the kelp and coral on the seafloor. Grab the Ancient Chest and haul it back onto your boat. Inside you’ll find some notes and a totem.

How to find the Ancient Vault for each totem

When looking for the ancient vault, check walls for drawings of your particular totem and there’ll be a grouping of them near the plinth you need to place the totem on. The plinth itself is a small, flat-topped rock with a square indent in it. Place the totem and a doorway will open to reveal the Ancient Vault.

How to solve the Ancient Vault puzzle

Now that you’re into the Ancient Vault, you’re almost at the Shroudbreaker! There’s a very obvious set up in here, a large plinth in the middle with four braziers, and four pillars on the rear wall. The pillars don’t have symbols on them yet, but when you light the braziers with your lantern they will. BUT DON’T DO THAT YET!

In the journal, you’ll see there are three lines of symbols next to the island hint. You need to turn the central brick of each of the pillars to the symbols in the book and then hit the button in the middle of the altar each time to “validate” the code. We’re saying look at these symbols now because as soon as you light the braziers, the temple begins to fill with water. You have quite a bit of time to turn the pillars to the right symbol, but we don’t want you to panic.

Congratulations! Now that you’ve avoided a watery grave, there are three slots in the altar for medallions. The top of the altar is a snapshot of where to go and dig to find each medallion. It’s less of an overhead map view and more like a security cam footage, you can move around to look through the “window” into the world and spot some more identifying features to figure out where to dig on the island.

They’re fairly easy to spot (and there’s three for each island, please don’t make us show you where each of them are). We recommend taking a quick screengrab, or a photo on your phone, so you don’t have to keep running back to the vault to check where it might be.

Once you dig up a Vault Medallion, a couple of coral skelly-bois will pop out of the ground to try and stop you. Smash them. Bring your Vault Medallion back to the altar and pop it into the slot, and the next location will show up. Find all three and the final door will open revealing The Shroudbreaker!

Now that you have the Shroudbreaker, head back to any outpost and hand it over to the Mysterious Stranger. He’ll tell you about heading to Plunder Outpost to talk to Madame Olivia, and then you’re onto the next voyage in the Tall Tales: The Cursed Rogue!

Now you’ve discovered how to get the Shroudbreaker you’ve made the first step on a long journey, nine voyages in the Tall Tales to find the Shores of Gold!