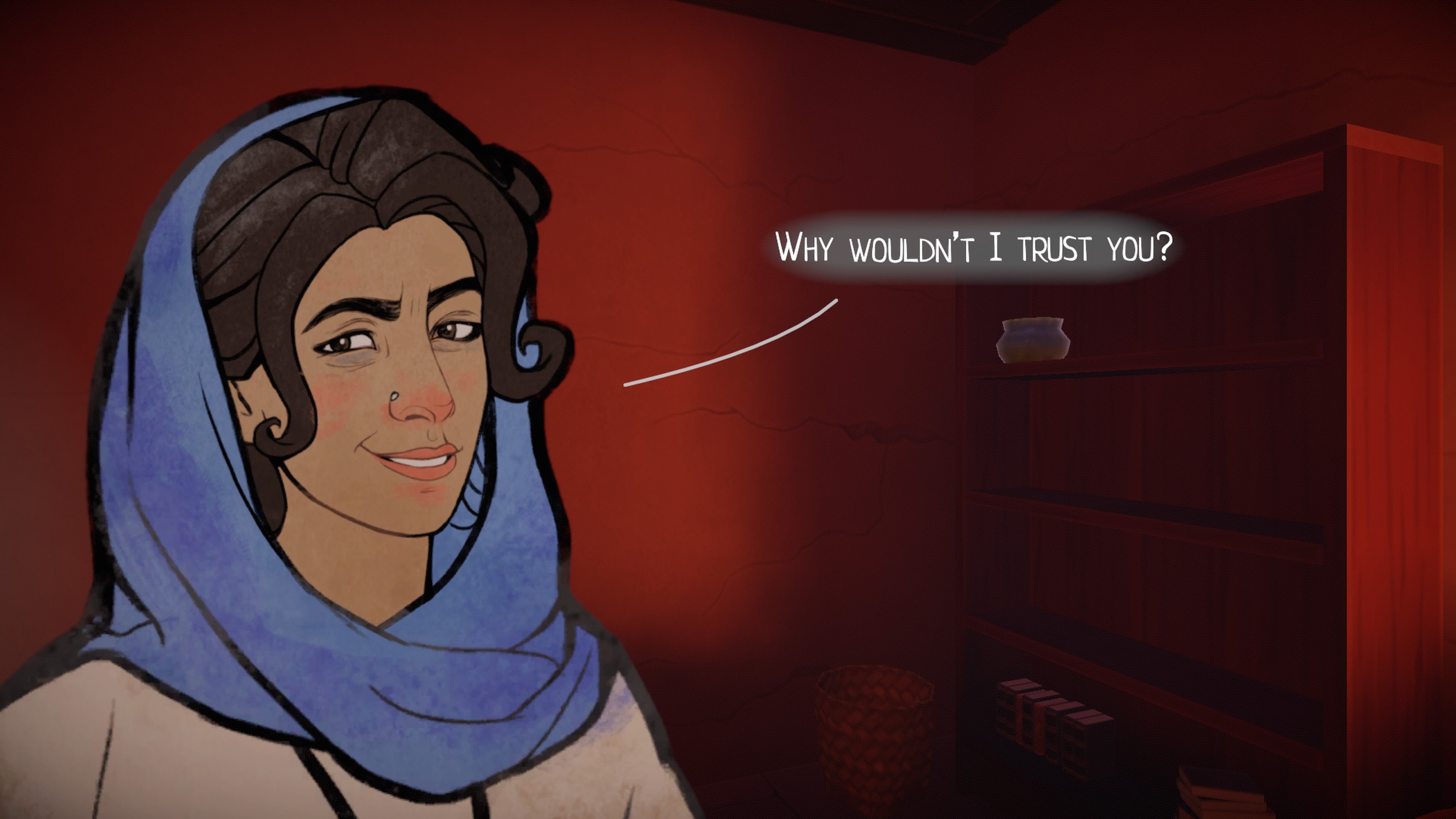 If you’ve ever studied Japanese, you’ll likely have been told that kanji, or Chinese characters, have meanings that can be roughly construed as images. The kanji for a person resembles a man on two legs, while the kanji for day looks a bit like the sun. It doesn’t apply in every case, but identifying these characters in larger texts or words is an immediately exciting prospect. The reward when proven correct leaves you eager to see and learn more, and it’s this feeling that Heaven’s Vault really nails in its journey of historical and linguistic discovery.

The language of learning

The next title from 80 Days developer Inkle Studios, Heaven’s Vault is a sci-fi adventure that follows archaeologist Aliya and her robot companion Six as they explore ancient ruins on long-abandoned moons. Travelling via sail, Aliya and Six drift across a web of rivers — passages of mysterious wind that carry people between moons in the nebula. Hopping between dig sites and undiscovered temples, you’ll collect artifacts and fragments of text from a forgotten age, and it’s through these that Heaven’s Vault begins to shine.

Contained within Heaven’s Vault is an entire pictorial language, and it’s up to you to decipher it. Sentences and words are built from a foundation of symbols, the shape of which gives a clue as to its meaning. Each time you discover a new series of symbols, Aliya will offer up some suggestions as to their meaning, and it’s up to you to pick your best guess. Often, the shape of the symbol is enough to give you a clue, but you’ll also need to infer from your surrounding too. An inscription over an entrance, for example, may detail the name of the building.

Whether you’re right or wrong, the game will continue, and it’s only when you discover further text that incorporates those words again that you’ll realize something might be amiss. Use a word incorrectly several times and Aliya or Six will chime in, saying that they don’t think it’s right and giving you the chance to guess again. Likewise, use the correct word for a symbol multiple times and Aliya will add it to her dictionary as a permanent translation. These guiding lines turn a potentially daunting task into a relaxing and enjoyable challenge.

It’s entirely possible to play through Heaven’s Vault looking only at the suggested words underneath, but don’t expect to be handed all its secrets. The real reward comes in identifying symbols and then noting their place in other words. Could that loop have a relation to time? Combined with dotted lines that probably mean many, perhaps Eternity makes the most sense. It’s an engrossing puzzle, and given you can revisit the inscriptions at any time, one you could easily lose hours in.

Discovery or, more accurately, understanding is your goal, and my word does it make for a compelling one. You’re initially given the task of tracking down a missing researcher from the university, but after resolving this in the first few hours, you’re left without any real directive beyond Aliya’s desire to piece together the fractured and missing history of her world. Often we found ourself eager to visit a new location purely for the chance to discover new words, and test our current theories.

That’s not to say there isn’t a story here. The world of Heaven’s Vault has a vast and frequently dark tale to tell, and will leave you second-guessing yourself as well as other character’s motives. Perhaps most impressive of all is how well Heaven’s Vault handles choice. There is an overarching plot to uncover here, but you’re left to explore much of in the order you please.

It’s also entirely possible to miss many details as you hop between moons. Early in our journey, we walked straight past what turned out to be a seemingly plot-crucial discovery, and it was only by chance that we discovered it in a final sweep before leaving. Either way, the narrative would have continued undisturbed. We’re avoiding saying too much here for fear of unearthing its secrets, but it’s safe to say that Heaven’s Vault is a brilliant realization of non-linear narrative in gaming, and packages that with superb interpersonal dialogue that you won’t want to miss.

From traversing its rivers to piecing together text, Heaven’s Vault is a considered, thoughtful game. While that plays to its strengths overall, it did cause a few issues early on. Dialogue largely takes place in real-time text bubbles that appear as you walk, and with no audio cue it’s easy to miss comments or the chance to respond if you happen to glance away from the screen. You can change the rate at which text appears, but there’s no way to scan back through what was discussed. The music and voice work too are beautiful but sporadic. Multiple times we found ourselves taking part in a lengthy conversation or spot of inscription deciphering in complete silence. This feels poignant at times, but more often it left a sense of emptiness that a gentle background melody could have filled.

Heaven’s Vault also marks Inkle’s first foray into the realm of 3D, and that’s not without its fair share of problems. The camera occasionally clips through the environment or ends up stuck behind a character while dialogue takes place. A few larger areas also saw the frame rate struggle a little as the camera panned across them. These are minor blemishes, however, and well worth suffering to experience the unique visual style on display. While the environmental textures are simple, Heaven’s Vault is still a beautiful place to explore, and it’s thanks in large part to the characters. Rendered in 2D, characters flit between poses as they move, giving the impressions of pages turning in a comic. It’s a wonderful effect brought to life by the excellent art and character design.

The handful of lead characters are all grounded and well-realized. Aliya is no Lara Croft or Nathan Drake of Archaeology, leaping off cliffs and gunning down baddies. She may be impulsive and enthusiastic, but at heart she’s an ordinary, sometimes even frail person. This generates a sense of immersion that makes every decision feel both characterful and impactful. Whether it risks Aliya’s safety or her relationship with another, you’ll want to make the choice that feels right.

Whether you’re interested in puzzles, language or writing, Heaven’s Vault is a delight to pry open and lose yourself in. There are few games that offer an experience comparable to Aliya and Six’s voyage, so treat yourself with a trip down the many twists and turns of its rivers.