What to use Monkey Booze for in Sekiro: Shadows Die Twice

You can't drink Monkey Booze yourself in Sekiro: Shadows Die Twice, but there are other NPCs who might have a use for it. 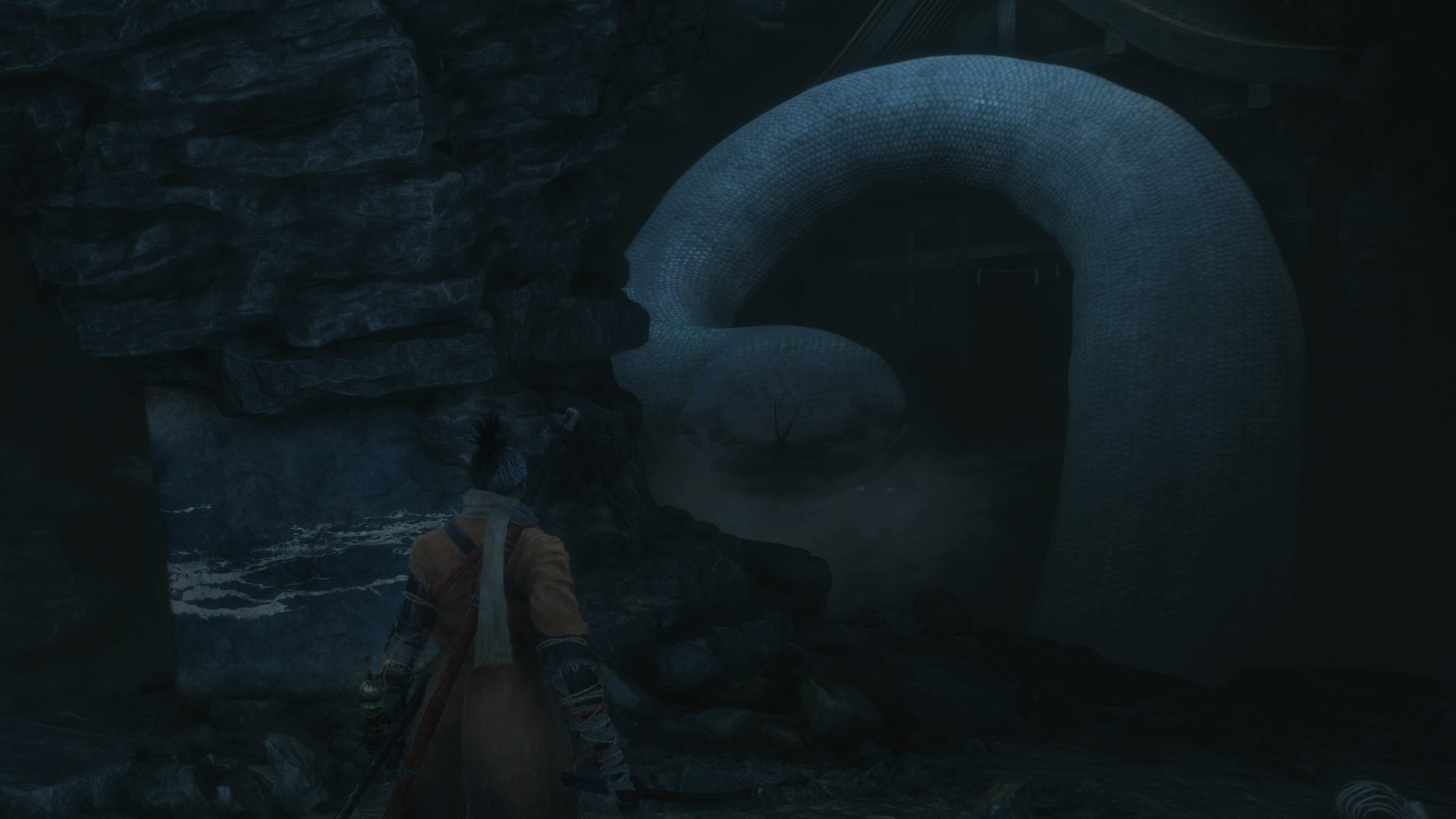 How to get the Man Without Equal achievement in Sekiro

Here are all the bosses you need to beat to get the Man Without Equal achievement in Sekiro, including where to find the missable ones.

There are plenty of big baddies in Sekiro: Shadows Die Twice, but one of the most commonly recurring antagonists you’ll face is the Giant Snake. Officially named the Great Serpent, this beast is a terrifying adversary that must be snuck past repeatedly, avoiding its gaze as you find a path to safety. Once you make it to the bottom of the Sunken Valley Passage, you’ll encounter another Giant Snake blocking your path to Ashina Depths.

The Giant Snake in the cave is found shortly after passing the Toxic Memorial Mob merchant in the Sunken Valley Passage. You’ll need to make it past several acid spitting lizards and ghostly wall enemies that pop out with thrust attacks (you can mikiri counter them), but once you know the route, it’s easy to sprint to the Great Serpent. As with other Giant Snake encounters, you need to find a way to slip past unnoticed here, but to do so you’re going to need the Ninjutsu Puppeteer Technique.

This Technique is obtained by defeating the Folding Screen Monkeys in Senpou Temple, and allows you to animate the corpses of enemies that you backstab. If you haven’t done so already, defeat Genichiro Ashina in Ashina Castle, then make your way to Senpou Temple to claim the Mortal Blade. You don’t actually need to obtain the Mortal Blade, only defeat the Folding Screen Monkeys, but there’s no real reason not to get it after.

Either way, once you have the Ninjutsu Puppeteer Technique, return to the snake, and drop down from the ledge on the left to the platform below. Follow this and climb or wall jump up to the platform with the cowering monkey on it. Don’t worry, you don’t need to stealth here, the snake won’t care unless you get on the platform he guards. Make sure you have the Ninjutsu Puppeteer Technique equipped, then backstab the monkey and activate the technique.

The zombified monkey will then leap up into an alcove on the left and begin dancing, drawing the Giant Snake’s attention. As soon as the Snake lunges at the monkey, grapple to the main path and run into the temple here. The Snake’s body will slam into the wall behind you and block the path. Don’t attack it or it’ll slam again, dealing massive damage if it hits. Unfortunately, you can’t actually kill this particular Great Serpent, so you’ll just have to let it go on its slithery way.

Inside you’ll find Dried Snake Viscera that can be given to the Divine Child of Rejuvenation during her questline, as well as a grapple point that leads you to the Ashina Depths and Snake Eyes Shirahagi boss fight.