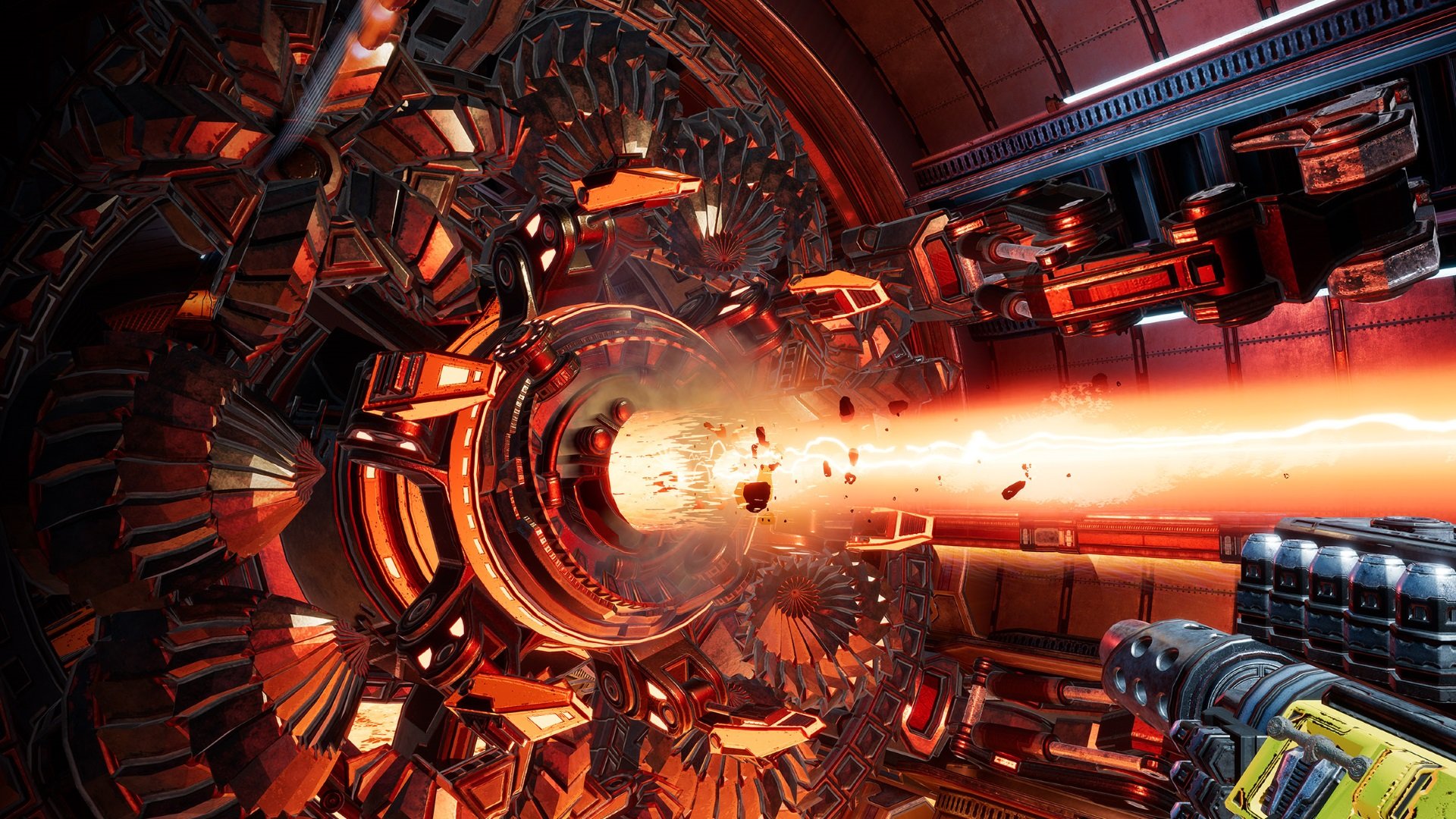 If you like your gunplay accompanied by excessive amounts of flair, you won’t want to miss My Friend Pedro. An acrobatic, 2D shooter, Pedro is giving bullet-time a welcome revival with backflips, pirouettes and yes, gas canister riding.

Deadtoast has released plenty of short clips from the game, and the core emphasis definitely seems to be on adding fun mechanics, logic be damned. To this end, we’ve already seen footage of levels with barrel riding, skateboarding (tricks included) and swinging through windows in an explosion of glass.

A short explanation on Deadtoast’s blog post, pretty much sum up their design approach:

“Basically when doing play testing a lot of people were trying to do the split aim while swinging and later realizing they couldn’t because one of the hands are used to grab onto the rope. I had a little think and thought it would be cool if you could grab the rope with your legs, freeing up both arms for split shooting.”

Certainly the most colorful game in this week’s roundup, Fly Punch Boom is an eccentric one-on-one, 2D fighter from the appropriately named Jollypunch Games. The game looks to take inspiration from Dragon Balls Z, with combatants slogging each other wildly across huge spaces while engulfed in super saiyan flames.

Understandably, Jollypunch seem most proud of their absurd super moves, which see opponents suffer through all kinds of indignities like being smashed through the centre of the earth or, in this case, swallowed entirely to be beaten up inside one fighter’s belly before cannonballing out the rear.

It looks utterly ludicrous, and we can only imagine that it’s even more fun to play. Oh, and you can kick someone up the moon’s bum. Because of course you can. Here’s the first trailer for the game:

First trailer for #FlyPunchBoom! Cute decapitations, giant laser monsters, buildings in the face, a planet broken in half, and the moon's butt.
What else could you want?#trailer #videogames #indiegame #indiedev #screenshotsaturday #gamedev pic.twitter.com/THuBzbGuUS

If Brexit Bus has proven anything, it’s that people still have a healthy appetite for side-on, obstacle course racers. Summer Catchers is pushing that genre further, describing itself as “An arcade racing adventure game about dreams, goals and striving.”

Oh, come on! I was just two centimeters away from saving!#indiedev #gamedev #screenshotsaturday pic.twitter.com/SKSbpXPuni

As a nothern girl, you’re off on a long journey to reach the sunny south and enjoy your first touch of summer warmth. Along your travels you’ll be set various challenges to complete that’ll let you upgrade your cart and progress further on your runs through fantastical snow-clad forests.

Summer Catchers has drawn a fair bit of attention already, not least because of the game’s stunning music. You can check out some alpha footage below, or visit the game’s official site here.

Lanterns is a marvelous little cooperative game in which each player carries a lantern that renders certain objects in the world both visible and physical. Each player’s lantern emits a different colour of light, meaning you need to coordinate your movements to surpass chasms and other obstacles and reach the exit together.

Laterns was made by Daniel Koitka, Mic Lyness and Ash Stevens, and originated as part of a five day game jam. The base game is available to play and buy on itch.io, but that hasn’t stopped the team from continuing work.

prototyped some stuff for #Lanterns: inversion of the main mechanic and a splitting camera (for levels that are too tall for the screen) @FeenikxFire @AshJagath #gamedev #indiedev #indiegame #madewithunity #screenshotsaturday pic.twitter.com/61S4nJZNSJ

One of the great things about Screenshot Saturday is it gives developers a chance to show off unusual ideas they’re playing around with, even if they never make it to release. Here we have the typical setup for Lanterns reversed, with the player’s lights causing bits of the level to disappear, encouraging the two players to separate rather than work together. It’s easy to see how this flip could lead to a whole new set of puzzles should the team continue down this route.

Rounding out this week’s list we’ll take things back to traditional gaming territory with guns, guns and yet more guns in Grip Digital and Terrible Posture Games’ Mothergunship.

Clearly, standard bullet-hell games aren’t hard enough, so the developers are bringing the genre forward into a hellishly intensive, first-person format. To survive the onslaught of ferocious robot aliens, you’ll need to craft a plethora of powerful guns. Of course, that’s assuming you have time to shoot in between all that dodging.

Somebody asked if you can craft a gun in #MOTHERGUNSHIP that could cover the whole screen. Of course you can! We are calling this "the Window"!#screenshotsaturday #indiedev #gamedev #indiegame pic.twitter.com/luHeAAgtlN

This week the team are showing that sometimes, quantity is more valuable than quality, as you can craft a suite of weapons that literally encircle the screen.

Mothergunship will be demoing at the PlayStation Experience later this week, but until then you can always check out the official site, or the trailer below: