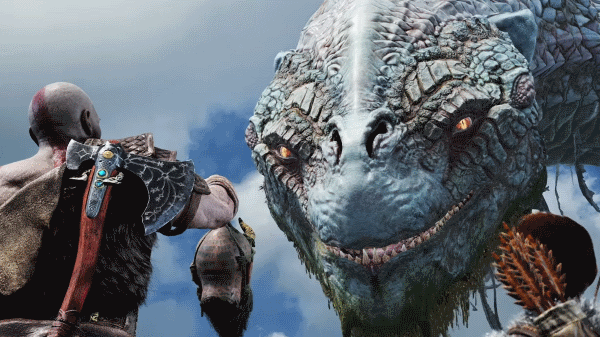 We’ve finally made it to the end of the year, and with it comes our choice for the best game released in 2018. Competing with Red Dead Redemption 2, Super Smash Bros. Ultimate and Spider-Man is no easy feat but, boy, one PS4-exclusive more than gave them a run for their money. Here’s our choice for Game of the Year 2018 and what it meant to each member of the AllGamers staff:

(Looking for the other games to make our list? Here are numbers 5-4)

It’s strange how I didn’t know I needed this game until I was 12 hours deep into it. Entirely accidentally, in one go. It’s the sort of epic fantasy experience that has disappeared from entertainment after they finished Lord of the Rings and Harry Potter and everyone decided there was no more oxygen for magic and mythology and ancient cursed mines in the public consciousness. But there it is, a big Norse saga with familiar names on surprising faces and a new role for gaming’s most angry man. With or without the context of Kratos’ past, this is a phenomenal ride of a story, helped along by just enough RPG elements to keep the fighting fresh and challenging and weighty and meaty and the size of some of these things you murder, what the hell man. It’s really good. I can’t wait until they do it again with Egyptian gods or whatever because I’m ready to crush Set’s head into dust.

As the only member of team AG not to have played God of War (or at least, not yet), what’s struck me most about the footage I’ve seen is how smoothly gameplay is blended with visceral cinematics. The decision to maintain a single camera throughout was a bold and resulted in some of the most intense fights we’ve ever seen. With a PS4 Pro picked I'm recently, I'm now a newcomer to the PlayStation way of life. One game sits at the top of my list to try, and I couldn’t be more excited to begin.

God of War is a highlight in captivating storytelling, world-building, and mood. From the very beginning, you're sucked into the grim, yet beautiful world that Kratos and his "boy" Atreus inhabit. When people ask how video games can be art, I'm quick to point them towards God of War, which serves as a shining example of both professional polish and style.

While other stories won me over in 2018 – Red Dead Redemption II high among them – I still found myself reminiscing about my time in God of War throughout the year, even while playing Smash in December. God of War is a series that gets better with each installment while remaining blissfully untainted by commercial greed. In 2019, I really hope we see more games of God of War's caliber. It may not be a perfect game, but it's damn near close.