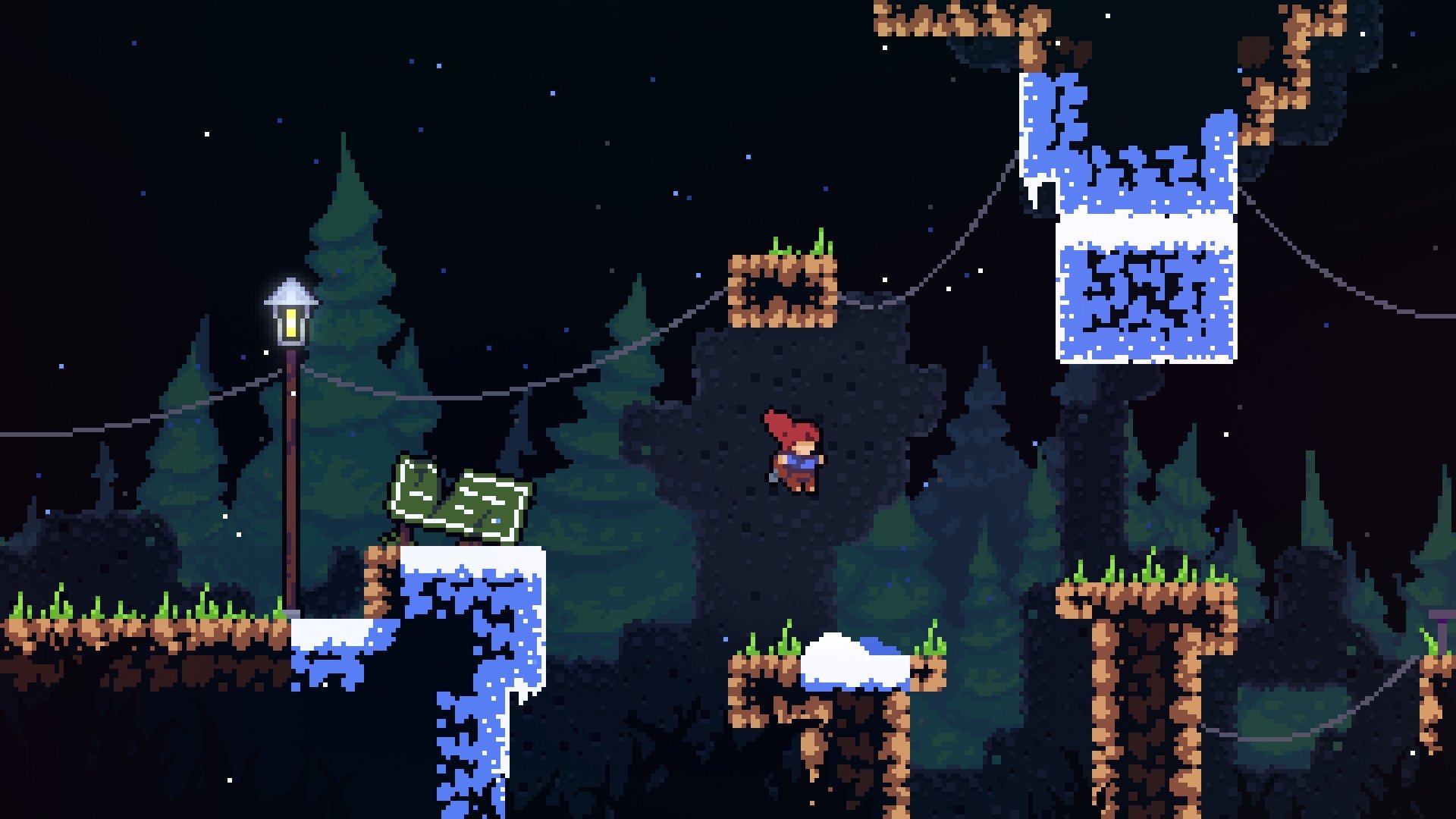 It’s hard to decide where to start when laying praise at the feet of Celeste. Is it the beautiful pixel art? The stunning soundtrack? The rock-solid platforming and devious (but approachable) challenge? Or is it the wonderfully told story that paints a fantastic allegory for anxiety and its affect on the mind?

Oh dear, what a lot of superlatives I’ve just used. But even still, Celeste manages to be greater than the sum of its parts. The incredibly tight platforming continues to evolve through the game as the protagonist climbs the eponymous mountain. There’s always a new quirk to discover and take under your control. And that’s the real theme of the game: overcoming obstacles on your journey. Whether external or inside your own head.

The game isn’t easy, but it’s so well paced that you’ll be picking up new skills without realising it. For those who want to put those skills to a real test, there are hard versions of each level. For those who are struggling with the base game, there’s a punishment-free Assist Mode. The developers of Celeste want you to enjoy the game unimpeded. And rightfully so, there’s a huge amount here to enjoy.

In Red Dead Redemption 2, the little things matter, and it’s this stark attention to detail that really helps set the game apart. You can lose your hat, you can browse a realistic catalogue of items, you can sit down and play a full game of poker, you can fish and hunt, etc.

Of course, you can also engage in some wild shootouts with your gang. Whether you’re looking for a compelling story, or a living and breathing world that pulls you in and makes you feel right at home, Red Dead Redemption 2 is a must-play experience. Yeehaw!

The phrase ‘Everything in moderation’ clearly never reached the ears of Masahiro Sakurai and his team at Nintendo. Super Smash Bros. Ultimate is a veritable feast of content, featuring over 70 fighters from a frankly staggering number of franchises. Metal Gear Solid’s Snake facing off against Animal Crossing’s Isabelle is a prospect that simply shouldn’t work, and yet somehow Ultimate more than pulls it off. The World of Light solo mode may prove a tad repetitive and grindy, but with so much else here to enjoy it’s really hard to complain.

Ultimate finds the perfect balance between party and competition, mixing wild items, stages and the strong, forgiving recoveries of Smash 4 with a faster and combo-heavy pace. Prefer ludicrous fun? Set up Stage Morph to watch chaos unfold as two levels transform between one another. Want a more serious approach? Each and every stage can have hazards turned off, or even be swapped to a Battlefield or Final Destination variant. No matter how or who you want to play, there’s someone and something here for everyone.

It seems quite mad that there hasn’t been a really good Spider-Man game before, now (clearly this guy never played Spider-Man 2 - Henry). It’s just perfect fodder really, isn’t it? Even the ‘hiding on gargoyles and stealth smashing criminals’ sections from Batman seem like they were somehow pre-emptively stolen from this Spider-Man game now, too. It’s also managed to retroactively ruin every other open world game that doesn’t let you fling yourself from one side to the other in record time and feel insanely good while you do it.

The slick presentation and competent story (it’s a superhero game, that’s like high praise) are all just cherries on top of what is a series of perfectly designed serotonin distribution systems. The little hit of happy hormones every time you get an inch-perfect swing into a boost off a lamp post means you lose hours to just webbing about the city, unaware you’re training for the game’s harder challenges later on. So when you’re actually asked to chase down drones and villains who are swooping through narrow gaps and pipes, you’re laughing the whole time without breaking a sweat. I don’t think there’s any way back from here, now. Superhero games have a new high watermark, sorry Bats.

Come back on Monday when we'll reveal our pick for Game of the Year in 2018 and what it meant to each of us!