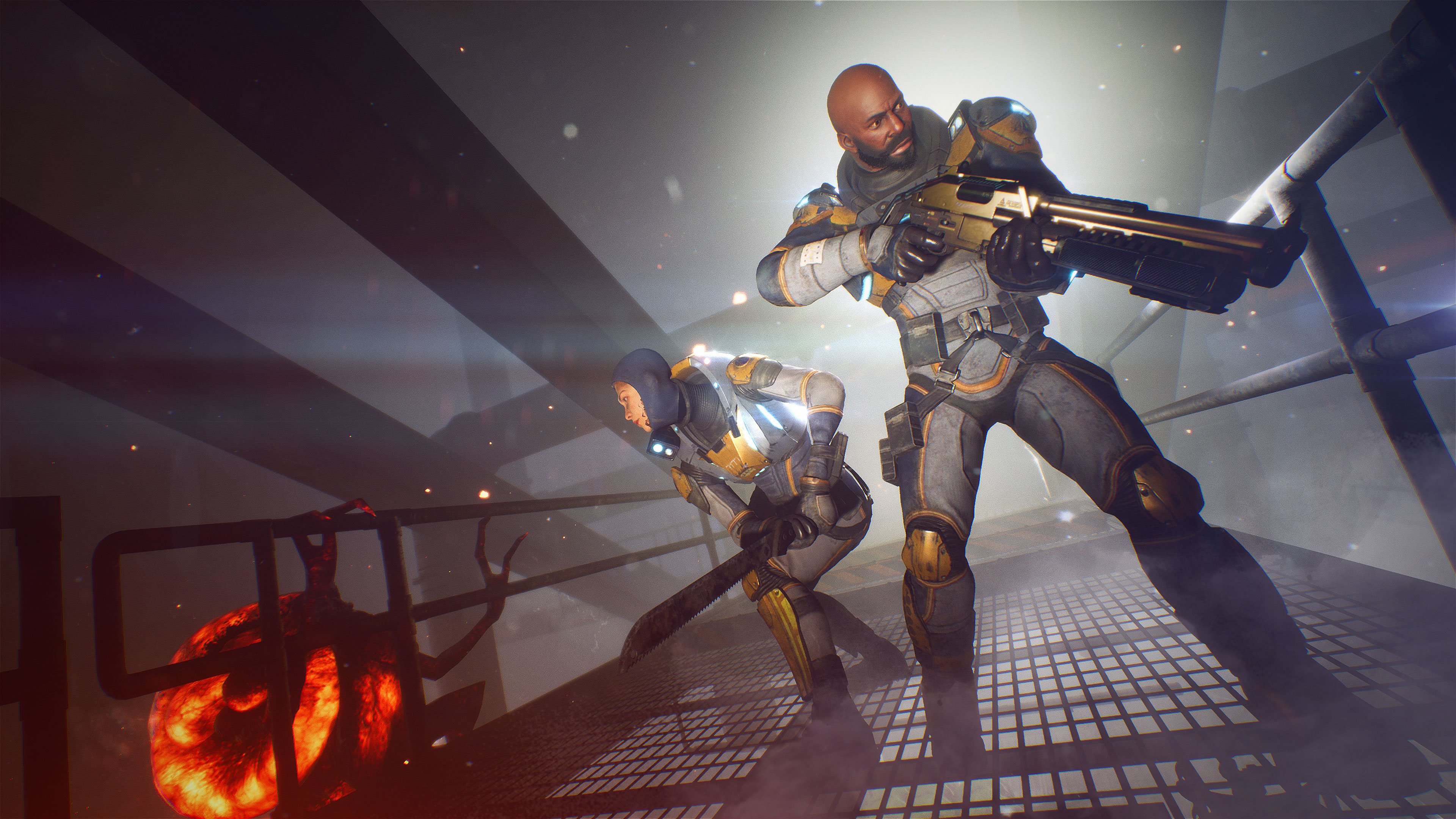 Holospark’s Earthfall is one of 2018’s hidden gems. This four-player co-operative shooter feels like Left 4 Dead but with aliens instead of zombies. Unfortunately, gamers had harsh things to say about Earthfall when it released earlier this year, but the developer implemented changes to improve the experience, the bulk of which were included in the Invasion update that launched this fall.

Among the additions… four new maps, a player progression system, an Invasion (think Horde) mode, and revamped weapon audio, the latter made possible by Hollywood studio Formosa Group, whose past credits include Bladerunner 2049 and Deadpool 2. Read through the extensive list of improvements in the Earthfall Invasion update.

Additionally, Holospark released another update this week with revamped sound for all of the game’s melee weapons, as well as new character/weapon skins, and more progression levels. It’s an example of a developer that took a solid punch from the gaming community and then responded with impressive tweaks that ultimately resulted in a better game.

With that in mind, we spoke to Russell Williams, CEO of Holospark, to learn more about how the company turned things around.

The games press and consumers raised concerns with Earthfall when it debuted. What was the team's reaction to that, and how did this feedback help change the game?

We love feedback, both positive and negative. After we launched, we really focused on monitoring public discussion about the game and looking for any issues that gamers were having. Once we’d addressed some initial launch issues, we started prioritizing the feedback we were into an action list and began working on the improvements. You can see the results of that feedback in our free updates the last couple of months, specifically with the Invasion update adding the top three community requested features.

How did you enlist help from Formosa Group? And what has their impact been on the game's audio?

The feel of the weapons is critical to the game, and a lot of the feel comes from the audio of the weapons. Formosa Group is a world-class sound studio with a huge track record in movies and games, so we went to them to redesign our weapon sounds to give them that movie-quality punch and heft. Because of Formosa’s experience, we gave them carte blanche in rethinking the weapon audio from the ground up.

The new sounds are incredibly impactful and make firing the weapons much more fun and exciting. They also helped with some issues with sound prioritization so that the weapon sounds didn’t drop out in favor of something else, so when you and your friends are in a firefight, you hear every bullet, every click of the chamber, and every shot echo as you’re unloading on the aliens.

Was Formosa familiar with the game before coming on board? What was their feedback?

They loved the action-movie feel of Earthfall and saw a real opportunity to elevate the weapon sounds with their signature cinematic approach. They knew they were going to go with the weapons almost from the very beginning, took the ball and ran with it, and really delivered beyond our expectations.

How do you use audio to build tension and excitement in the game?

Our dynamic music system is a good example of our approach. We use all kinds of in-game data to make the music responsive to the intensity of combat, the number of enemies engaged with you, the arrival of special enemies, and other factors. The result is music that brings dynamic tension and atmosphere to every session, and we’re very happy with the results.

How does the Invasion mode enhance the Earthfall experience?

The Invasion mode offers new levels that are designed for replayability with wave-based hordes. It gives you new defenses and traps to use against the aliens and upgrades you can purchase for yourself to give you new capabilities during the fight. The fights are more about holding out, so setting up defenses becomes more important.

It opens up even more intense gameplay and people have been loving it. In addition to the levels, we also introduced two long-term progression systems that persist between game sessions. One lets you level up and earn new costumes, weapon skins, and weapon charms for your characters.

The other unlocks 12 new skills in the game, some of my favorites being able to carry extra grenades, which is so important during an intense fight, dual-wielding AK5s, and escaping from Threshers by shoving a grenade in their mouths. Beyond the new maps, modes, and systems, we’ve also been working on quality-of-life features, like the new weapon sounds, performance improvements, animation polish, etc.

We’ve also added new maps, so whereas we launched with ten maps, we’re now at 15. It’s a huge update that really extends the game, and it is free to everyone who owns Earthfall.

Now that the game has been out for a while and is competing against other FPS games, what message do you have for gamers who have yet to play Earthfall?

Earthfall offers a unique spin on co-op with aggressive enemies, powerful weapons, and a high level of intensity. It’s a true test of gamer skill, and the better you are, the more the game will rise to meet that challenge. It’s chaotic, frantic, and fun, and it’s a great way to blow things up with your friends.

Earthfall is currently available for the PS4, Xbox One, and PC. You can buy it at a budget price from most stores, which makes the game a potential stocking stuffer in time for the holidays.