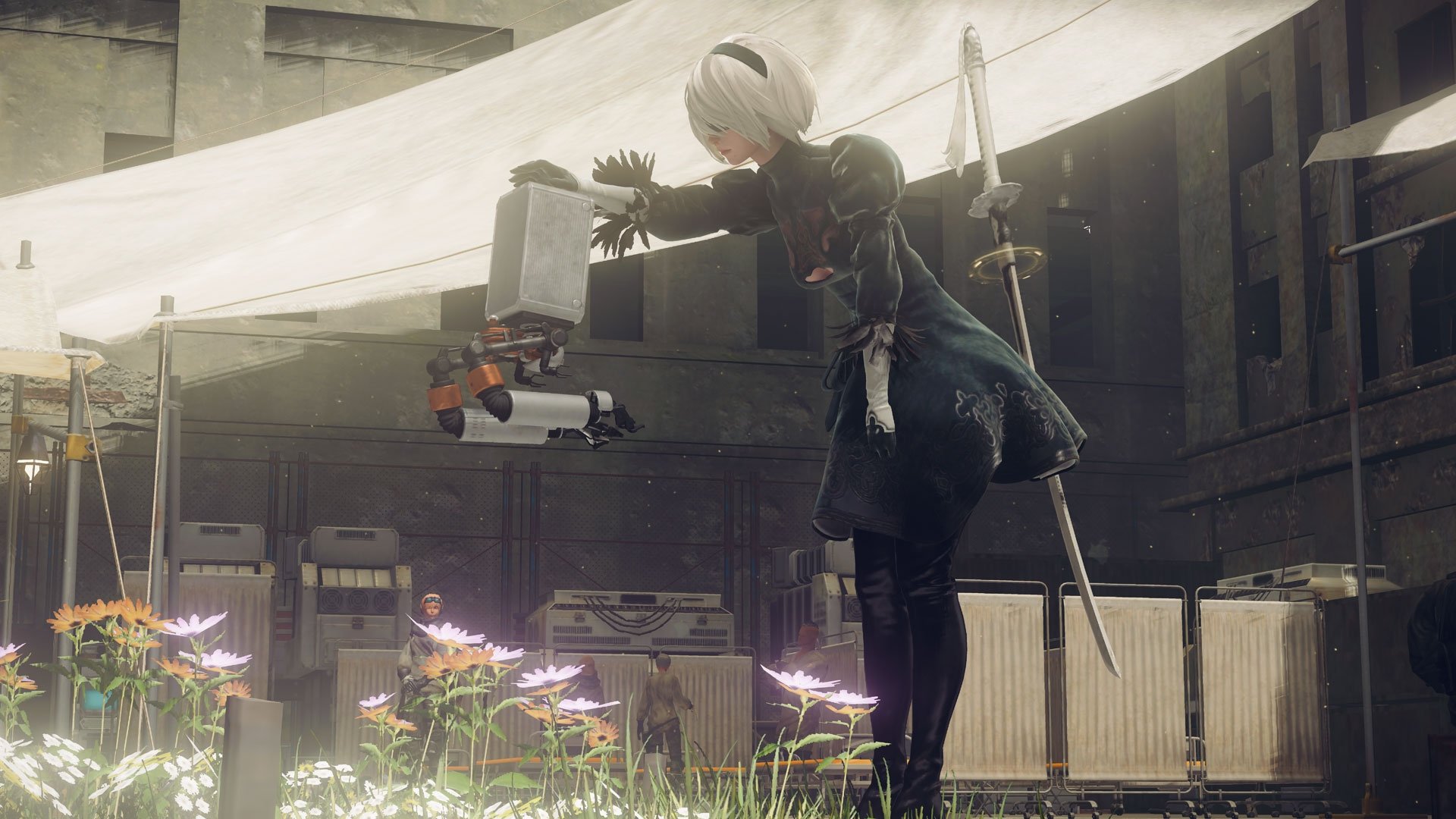 Watching the news and reading the morning headlines in 2017 has often felt like waking up to a real-life nightmare. With the mounting tensions in North Korea, unrest in the Middle East, Donald Trump's presidency and even Brexit negotiations, it can often feel like the world aims to constantly divide us. However, Nier: Automata's end credits demonstrate that despite all these terrifying things, we’re still inherently connected to one another. It’s been months since we beat Nier’s final ending and the emotionally charged credit sequence still gives us goosebumps. Those of you who’ve played Nier: Automata will know that there’s a very difficult decision you must make at the end of the game, and one that is not taken lightly.

It should go without saying from that headline and intro, but: spoilers follow.

Like a lot of game director Yoko Taro’s previous work, Nier: Automata features numerous endings that can be achieved through a combination of multiple playthroughs and random actions. There are 26 unique endings in total, and while most of them are simply game over scenarios, the first five are essential to uncovering the game’s full story. Once you’ve beaten route E, you’ll be met with a bullet hell credit sequence that pits you against the game’s voice actors, programmers, localisation and marketing teams. The credit sequence battle is notoriously difficult and getting past it unscathed requires a lot of patience, time and effort. Even if you’re playing on easy, your assist chips are deactivated and it still only takes three hits before you're sent reeling back to your last checkpoint.

Nier: Automata’s final battle is intentionally made so that you will fail time and time again, but through this failure there lies a beacon of hope. However, this hope isn’t manifested by any of Nier’s automated cast, but from other players like you who want to reach the game’s final conclusion. After dying several times, you’ll be asked if you want to receive help. Should you accept, your ship will be joined by a squadron of allies and the song playing during the sequence, originally sung by a single voice up until this point, becomes a beautiful chorus. Each ally carries the profile of another Nier player, and like the android bodies you see littered throughout the game, they’re indistinguishable from each other beyond their in-game name. Suddenly the fight becomes easier and the barrage of brightly coloured bullets is no longer a threat.

Upon completing the final trials of the bullet hell battle, you’re treated to a cutscene that shows 2B, 9S and A2 alive and safe. However, Nier: Automata lets you make one final choice. It asks if you’re willing to delete your game. The moment isn’t dramatic. There is no swell in the music, nor is there any achievement for doing so. Instead, you're met with simple narration and on-screen text from one of the Pods. Nier just wants to know if you’re willing to give up all your weapons, cosmetics and access to the game’s world in order to help someone else finish the game. Suddenly the credit sequence battle takes on a new meaning. The people that had helped you achieve the final ending had paid the ultimate in-game price.

Those of you who have ever lost save data due to corrupted files or accidentally overwritten a save will know just how heartbreaking this can be, especially when you’ve invested so much time and effort into them. This is what makes Nier’s final ending so touching. Players from all over the world, no matter what race, creed or colour, have given up their save to try and help others achieve what they have already overcome. Their save data may have been erased from the game, but their existence, no matter how long or brief, had led them to the same decision you currently face. You will never know who the strangers were, you will never know how much time they spent in-game, you will never know when they ended their journey. All you do know is that they gave up their precious time to help those who are struggling.

There is no special achievement for deleting your save file either, in fact there’s no reward at all. You even get asked repeatedly if you wish to proceed. The choice is ultimately left up to you and the game doesn’t judge you, nor does it force you into picking one choice over the other. Yoko Taro is known for creating unique and often random in-game mechanics that help flesh out his stories, but this is no trick. Saying “yes” to this option, followed by “are you sure?” will wipe all of your save data. You’ll never be able to use the nifty gear and equipment you spent hours forging and grinding, nor will you be able to revisit your favourite locations. Aside from the trophies you unlocked, all record of you playing Nier: Automata is wiped from existence. The game even goes through the menu system and visibly removes everything, before you’re returned to the home screen with a new background and three new game slots.

Death and resurrection play a huge part in Nier: Automata’s narrative and overall gameplay. In fact, it’s treated as an everyday occurrence, with 2B and 9S always willing to sacrifice themselves if it means they’ll get the job done. After all, they have the ability to upload their past memories and experiences into a new android body should things go wrong. And when dying is part of your daily routine, does it really matter anymore? Nier: Automata quickly teaches us that death in this android-filled world is meaningless. There’s no consequence to dying when you can simply locate your previous body and retrieve your memories, experience and various items. This is what makes the final ending so impactful, it’s the one death that matters, the death that gives both the story and its heroes the definition they deserve. By helping others, you’re allowing complete strangers from around the world to achieve what they couldn’t possibly do alone.

For many, Nier: Automata will go down in history as a titillating robot beat ‘em, and from the outside I’d have to agree, but once you peel away the fan service nature of it characters and look past the sleek combat sequences, you’ll see a game that manages to bring out the good side of those who have experienced its final ending. At its core, Nier’s credit sequence is about helping others and pulling together to overcome adverse situations, no matter how difficult they may be. The world can often seem like a dark and scary place, but by aiding each other we can all better ourselves and achieve great things. Nier may be a story about machine lifeforms trying to find meaning in a world that lacks the answers they seek, but by exploring their existential struggles, we are left with one of the most human choices of all.