Can you get free horses in Red Dead Online?

Where Ultimate Edition owners can grab their free horses in Red Dead Online. 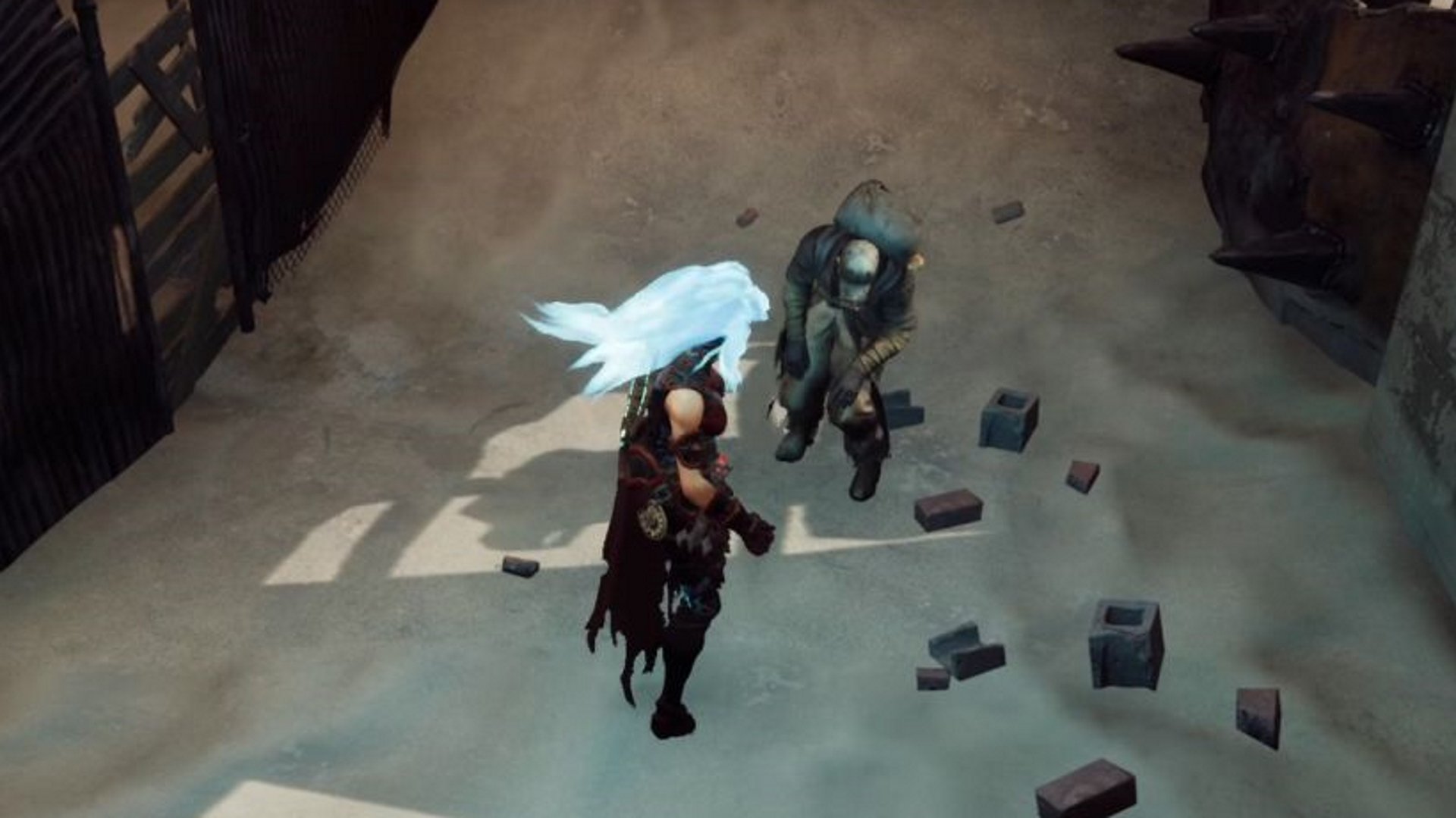 All human hiding locations in Darksiders 3

The Darksiders universe may have seen Earth play host to the premature apocalypse, but anyone who’s spent some time exploring in Darksiders 3 will have discovered that Humans are far from extinct. Weak though they may be, 20 surviving humans can be found throughout the world, desperate for you to rescue them. Whether you care about the fate of humanity or are just after the Humanitarian Trophy/Achievement, we’ve found all the human hiding locations in Darksiders 3 for you and collected them in a handy list below:

The first thing to know before heading out on a human hunt is that you need to have met Ulthane and had him give you a trinket that’ll let you rescue humans. Once you have it you’ll be able to start saving them, but you won’t be able to reach them all until you’ve unlocked each of Fury’s Hollow Forms. For that reason, you may want to wait until later in the game before you re-explore areas to find them. That said, every five humans you save will net an upgrade to your Rider’s Mercy Relic, which may mean you want to hoover up some of them earlier in the game.

Most humans are hiding behind boarded up barriers or behind debris — sensible precautions, given the demonic/angelic invasion — so don’t be surprised if you haven’t found many during your adventures so far. We’ve collated each set of humans based on the regions you can find them in. If you have access to Fury’s full suit of powers, running through each area one by one will be the fastest way to collect them all.

From the elevator into the Crossroads, head forward towards the ruined bus. The human is hiding in a hole under the center of the bus.

Sticking in the Crossroads, the next human can be found behind a purple barrier. You’ll find them by heading towards the Suffering beast on the left as you exit the elevator. Use the Force Hollow form to break through the barrier with your hammer.

Starting in Marker’s Forge, take the wooden walkway along the path over Ulthane’s area. There’s a gap here you can swing across before using Flame Hollow form to burn a path ahead through some thick webbing. Continue through this route and you’ll each an office space. As you travel forward you should see a barrier set up in one corner. Drop into the hole here to find another human.

You can also reach this spot from later in the level. At the point where you fight a large Suffering enemy, you’ll see a gap along the path that you can leap across in Flame Hollow form to reach the human.

Start from the North End Serpent Hole and attack the enemies around the fire. Once they’re defeated, look for the purple pile of rubble to the right. Use Force Hollow form or feed the Bomb Bug in the nearby building to smash it and save the human.

Follow the road on from the last human until it cuts off and drops down into a ditch. Jump down here and enter the tunnel on your right to find a human hiding at the end.

Start at the Splintered Station Serpent Hole. Follow the path to the right until you reach a red-eyed baddie. Beat them and enter the tunnel here to find a human.

From the Cistern Serpent Hole in the sewers, follow the stairs to Vulgrim’s right. There’s a human at the end of the path.

Make your way to Vulgrim in the Tangled Grotto. From here, head straight forward into Tangled Grotto. Take a left, then follow the path that turns back on itself. You’ll see a broken train carriage here that you can walk up to a secret path. Enter the tunnel and you’ll reach a hiding human.

From the Tangled Grotto Serpent Hole again, take the path to the right and travel up the stairs. You need to use the Force Hollow form to smash the purple debris here then jump to the ledge on the right in the next room.

Starting from the room with the two holes described in Human #10’s directions, don’t drop down either and instead take the path off to the far right. Stick to the right side and you travel all the way down to the end. You’ll see a ledge up on right you can jump to using Flame Hollow form. The human should be weeping up here.

Travel to the Festering Pool Serpent Hole then continue past the waterfall until you reach the office building. Enter the building through a hole and you’ll see a human behind a fence but won’t be able to reach them. You need to keep going through the building until you make it to the next floor. As you reach the room with a Bomb Bug outside, jump across the shipping crates here to get past the fence and reach the human.

Next you need to travel to the Drowned District Serpent Hole. Head through the sewage pipe here until you get to the water. You can see the human’s location above you from here, but you’ll have to follow the path round the building first.

If you haven’t already done so, you need to make your way through the cave to the building and open the door before returning here before you can progress. Once you’ve done that, ascend the staircase outside the building and use Flame Hollow form to swing over to the web-covered doorway on the right. You need to double-jump near the webs to set them alight and open the path to the human down the hall.

Jump to the Mangled Freeway Serpent Hole and enter the air vent next to Vulgrim. Keep crawling through until you find the human.

For the next human, fast travel to the Cargo Hold Serpent Hole then return to the room where you fought Lust. Using Force Hollow form, roll up the crystals here and follow the path until you reach the toxic water. Use Storm Hollow form to float over the wind spirals and enter the building.

Travel through until you reach the room with the Mansk up on a high ledge. Attack it and drag it down to the ground, then hit it across to the left side of the building. Climb up to the roof and head right down the metal walkway until you reach the human.

From the Forgotten Lake Serpent Hollow, swim across the large room until you reach the door surrounded by large crystals. Inside, turn right and fall through the hole into the water. Swim through, then climb up the platforms you’ll have pushed previously to reach the ledge above. At the purple doorway, take a left and jump up to the next ledge. You can double jump again here to scale the wall and reach the human.

Next up we need to travel to the Sunken Tracks Serpent Hole. Using Stasis Hollow form, jump up the walls to the right. Once you reach the top, swing over the gap and use Force Hollow form to stick to the crystals on the ceiling. Follow the path until you drop down to a small ledge with a human. Honestly, how did they even get here?

The last human in the Depths is close to the Sewage Egress Serpent Hole. Swap to Stasis Hollow form and wall jump up the elevator shaft. At the top you’ll find a human hiding in a small room.

To collect the final two whimpering humans you’ll need to explore the Scar. The first is reached from the Drilling Annex Serpent Hole. Head right and use Stasis Hollow form in the large area to climb the path on the wall. Walk over the bridge here then climb another wall with Stasis Hollow form to access a sand-filled room. Stick to the right and you’ll reach a human behind a barricade.

The final human can be reached from the Drilling Annex Serpent Hole again, though the path is a little longer this time. Swing over the pipes to the sandy pathway outside and follow it through the door. Use Flame Hollow form here to double jump to the upper ledge in front, then swap to Stasis Hollow form so you can wall jump up to the next ledge up.

Jump on the conveyor belt here and stay on it to the very end. Drop onto the wooden path and look for the large metal grinder gears. Stop them using Stasis Hollow form and drop down the gap. Follow the hidden path through several spike-lined doorways and you’ll find the final human.

With every human saved you’ll have earned the Humanitarian trophy, so congrats! Now that you’re done, be sure to check out the other Darksiders 3 guides we have here on AllGamers.