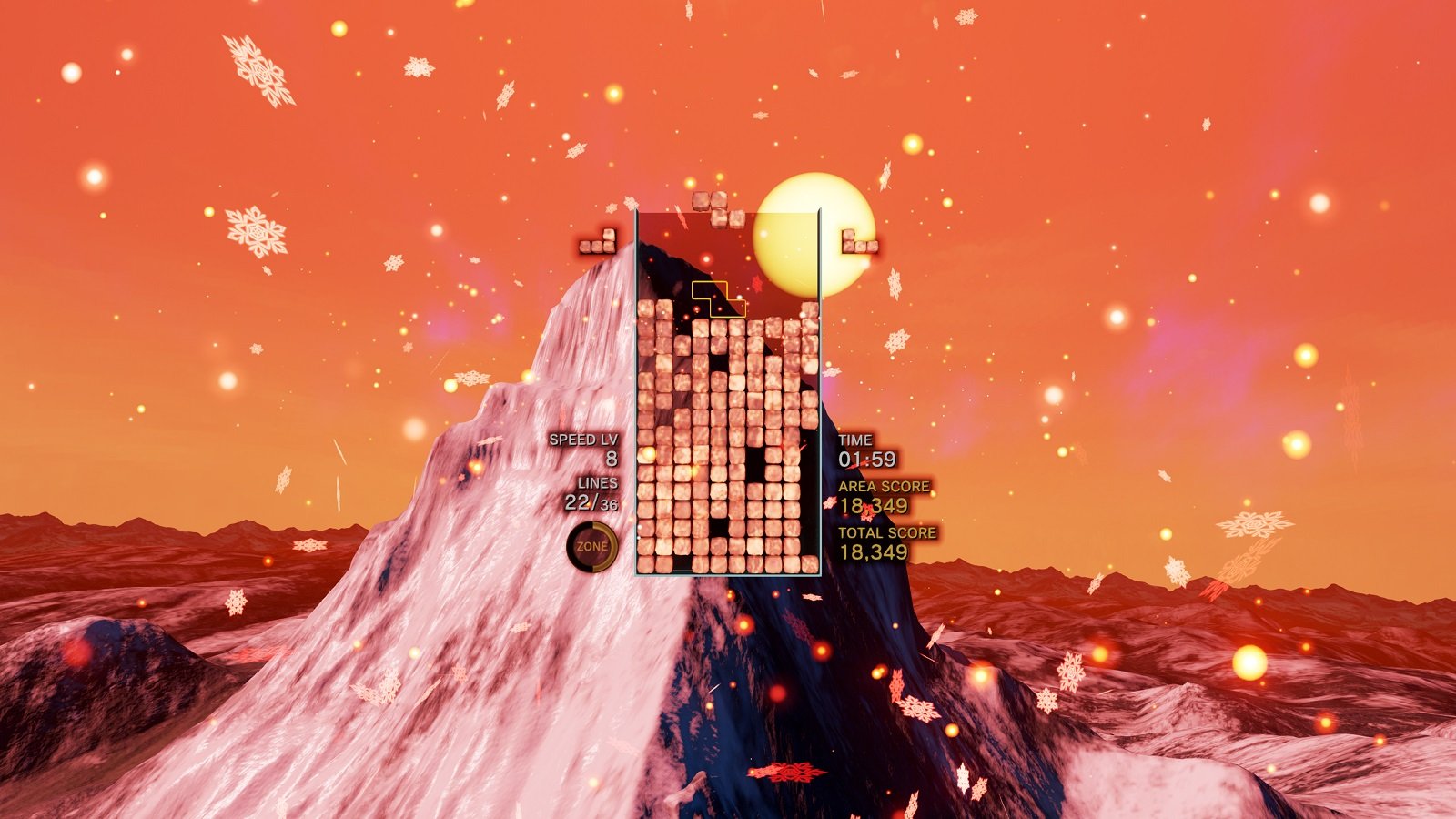 Tetris Effect is the latest offering from the Tetris franchise, one that feels thoroughly tailored for the modern era. As a PlayStation exclusive, Tetris Effect is available for PlayStation 4 with added support for PSVR. As many have pointed out, Tetris is a game that’s easy to learn, yet hard to master. Tetris Effect complements this idea in various ways, most notably through an episodic campaign called Journey Mode.

What’s more, it plays upon a phenomenon of the same name. The longer you play Tetris, the easier it is to get hypnotized by the game. This can cause you to picture falling Tetriminos in your head during moments of quiet calm, like when you’re attempting to drift off to sleep. With a kaleidoscope of brilliant images in each Journey Mode stage, Tetris Effect is a game you'll have no trouble playing for hours on end.

Each stage feels alive as it reacts to your strategy of rotating Tetriminos and clearing lines, as does the music. Journey Mode’s opening stage, The Deep, features the memorable song from the game’s announcement trailer, “Connected (Yours Forever).” The end result is a mixture of beat/rhythm game, VR eye candy, and classic puzzler. One with – by and large – one of the best soundtrack offerings in recent years.

Every song has its own unique flavor and vibe, much like the stages themselves. Journey Mode truly lives up to its name as it whisks players from downtown New York to snowy mountaintops and sand-covered vistas. If the aesthetic of Effect ever feels familiar, you can thank designer Tetsuya Mizuguchi, who previously lent his talents to other eye-popping games like Lumines.

One feature we really appreciate having in Tetris Effect is Theater Mode. Using Theater Mode, you can sit back and soak in the visual splendor of the game without ever having to worry about a Tetrimino. You can linger in Theater Mode as long as you like, tapping buttons to make the effects pop and watching the transitions pass by with each simulated line clear.

You can also capture video footage of your favorite stages after you complete them and watch them back using PS Share. You can post these videos to Facebook or Twitter and wow your friends with clips of you pulling off those fancy Decahexatris, , and Ultimatris moves. Speaking of the Decahexatris, it’s exclusive to Tetris Effect and tied directly to the new Zone Meter.

By filling up your Zone Meter, you can slow down time. While the effect is active, your line clears are tallied. Achieve 16 or more line clears before the effect ends, and you’ll earn a Decahexatris. You can also get a “” by clearing 18 lines and an “” by reaching the max line clear count of 20. We’ll admit we’re still struggling to get an Ultimatris, though we’ve come close at 19 lines cleared.

As with all elements of Tetris, practice really does make perfect. Journey Mode took us a little over an hour to complete when playing from beginning to end without pause. After completing Journey Mode, you can either go back and replay it on a higher difficulty setting like Expert, or you try out the Effect Mode section. Effect Mode is where you’ll find classics like Marathon, as well as new modes like Purify.

The more you accomplish in Tetris Effect, the more avatars and trophies you unlock. These all serve as motivation to do more, play more, and so on. As with all games, there are downsides. At times, the strobing light effects and transitions feel harsh on the eyes, particularly in VR. Some of the levels pained us in VR, and we had no choice but to pull off the headset and take a quick breather.

There are ways to tame the visuals and make them more palatable (perfect for VR users), but we were reluctant to use these. The game presents itself as a work of art, and it feels wrong to dull this somehow, even if doing so makes it easier to see what you’re doing. The other negative is the game’s lack of multiplayer.

Tetris has become synonymous with multiplayer thanks to recent titles like Puyo Puyo Tetris and in-person competitions like the Classic Tetris World Championships. For those unfamiliar with the CTWC, it’s where hundreds of Tetris players converge and 1v1 each other in NES Tetris. We watched the event on Twitch last month and it was an absolute blast. Heck, we’re even thinking of competing next year!

With that in mind, it’s a shame that Effect lacks a multiplayer option outside of the game’s leaderboards. If you want to flaunt off how much of a Tetris pro you are, the leaderboards are currently the only way to do it. With so much potential for multiplayer in Tetris Effect, we predict it’ll likely be added in at a later date. Lastly, the main detractor that’s been pointed out is the game’s price point of $39.99.

To some, this is too steep. Big games nowadays cost upwards of $59.99, making Tetris Effect $20 cheaper than your average console release. Despite being a familiar puzzle game, and having a story mode that lasts roughly an hour, there’s high replay value to Tetris Effect. Using a method where you calculate hours played to dollars spent, you can easily pour 40 hours into Tetris Effect to match its $40 price tag.

All in all, Effect is a game rich with content that’s highlighted by the sheer amount of love and time that went into creating it. Not only is it a visual masterpiece, one of the best Tetris games we’ve ever played. Now if you excuse us, we’re going to go attempt that Ultimatris again.