How to find your hat in Red Dead Redemption 2

Find your missing hat by following these three steps. 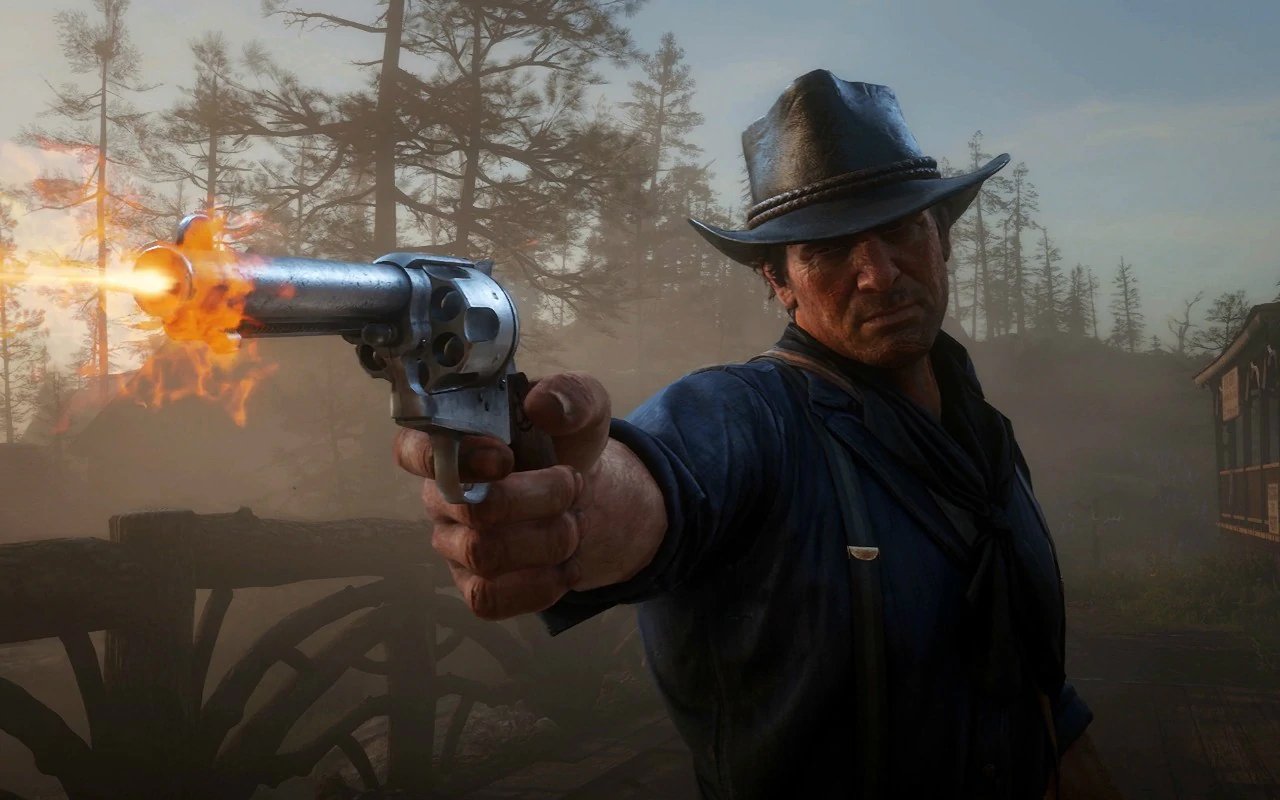 Awaken your inner horse whisperer and become the best stable-hand in the West.

Rockstar’s games are known for their chaotic combat and Red Dead Redemption 2 is no different. After all, living the life of an outlaw in the Old West isn’t exactly pretty. You’ll need your wits about you if you wish to survive the numerous gunfights, brawls, and deadly wildlife that's present in Red Dead Redemption 2’s world. Mastering Arthur Morgan’s deadly arsenal of weapons will take a bit of practice, which is why we've put together this guide to give you some essential tips in order to become the best gunslinger in Red Dead Redemption 2.

How to equip weapons

Players can equip weapons, switch ammunition, or view individual weapon statistics by opening up the Weapon Wheel. To do this, hold L1/LB to open the weapon wheel, and then use the right stick to select the desired weapon, then release L1/LB to equip it. Of course, Arthur Morgan won’t have access to every weapon in the game from the get-go, but as you progress, you’ll naturally acquire more. Below is a list of every weapon type available in Red Dead Redemption 2.

Pistols may not be as powerful as their cooler and much clunker revolver cousins, but they can hold more ammunition, plus they can be reloaded a lot more quickly. It’s often best to use a pistol when you’re in need of a few extra bullets.

Revolvers have always been a cowboy’s best friend. They don’t just look and sound cool, they also offer high amounts of damage and increased accuracy when compared to pistols. These six-chambered sidearms can down even the hardiest of but expect slower rates of fire and painfully long reloading.

The trusty old rifle is a true classic in the Wild West. Rifles are fantastic for those looking for more precision and damage. They are fantastic for hunting both animals and other gunslingers, especially when coupled with a scope.

If you don’t mind trading accuracy and range for higher rates of fire and increased ammo capacity, then repeaters will likely be to your liking. They may not do as much damage as rifles, but they more than for this with their more forgiving playstyle.

Shotguns are fantastic for killing multiple targets – something you’ll be dealing with a lot if you plan on earning your riches through heists. These beasts can be loaded with buckshot ammunition, which makes them fatal at close range, while additional Slug rounds their damage against singular foes.

Thrown weapons can be used to either silently take out foes or create utter chaos. Arthur Morgan can make an explosive statement by throwing dynamite or fire bottles at his enemies.

Sometimes opting for a stealthier approach is the best option when dealing with particularly tricky targets. Bows and arrows offer considerable accuracy and damage, so consider using them when you wish to go undetected.

Red Dead Redemption 2’s firearms may be great fun to use, but sometimes it’s best to rely on melee weapons to finish the job.

You wouldn’t be much of a cowboy if you didn’t have access to this iconic item. Red Dead Redemption 2’s lasso can be used when out hunting to stop wild animals dead in their tracks, but it also has another use. During bounty hunts, you’ll sometimes need to bring the target back alive. To do this, equip the lasso through the weapon wheel, aim at the target with L2/LT and the right stick, then press R2/RT to sling the lasso in the enemy's direction. Once the target has been lassoed, players can then approach them and press Circle/B to hogtie them. An incapacitated enemy can then be picked up and placed on the back of the horse. Be sure that your target is hogtied as lassoed targets have a tendency to break free.

There are a lot of firearms to master in Red Dead Redemption 2 and you’ll need plenty of ammo for them if you wish to use them all effectively. However, there are several different ammo types available. For firearms, cartridges offer increased range and can penetrate through multiple enemies. Meanwhile, Split Point cartridges enhance your accuracy and reduce the drain rate of Dead Eye. Finally, Express cartridges and specially crafted Explosive ammunition drastically improve a weapon's overall damage output.

There are even different arrow types that can be used with your bow. Small Game arrows allow you to acquire quality pelts when compared to normal ammunition, while Poison arrows can bring down big game. Of course, if you’re looking for arrows with an extra added oomph to them, then be sure to craft Fire or Dynamite arrows when you have the right materials. Of course, most ammunition for all of the firearms in Red Dead Redemption 2 can be purchased from either Gunsmiths or General Stores, so stock up when you’re running low.

You can upgrade various pieces of equipment at any Gunsmith store in Red Dead Redemption 2. For example, some upgrades allow you slow the degradation of certain weapons, while others simply allow you to carry more ammunition. There's even an option to bolster weapons as well. These reinforced variations of accessories unlock further upgrades that can be purchased through the Trapper store. These accessories can be rather pricey and require you to obtain materials from hunting, but the payoffs are well worth your time.

Weapons in Red Dead Redemption 2 gradually degrade based on their usage and environment. If you wish to keep your deadly arsenal in tip-top condition, then constant care and maintenance required. In fact, letting weapons get dirty or dusty will eventually reduce the damage output and overall combat effectiveness. Thankfully, maintenance is easy. Simply select the weapon you want to fix up from the Weapon Wheel, then press R3/RS to inspect and clean it with some Gun Oil. This oil can be purchased from any Gunsmith store, so stock up when you’re in town.

Using the same weapon over and over again will reward you with experience. Weapon Familiarity improves weapon handling, reduces recoil, and even speeds up actions like reloading. You can check each weapon’s Familiarity level by heading over to the Weapons section of the in-game compendium.

Every Gunsmith store has a unique selection of items that the player can purchase. If you’re on the lookout for a new gun, ammunition, and accessories, then it never hurts to do a bit of window shopping. Gunsmiths also allow you to upgrade and customise a weapon’s particular statistics, so see what areas you can tweak and improve. Existing guns in your inventory can also be repaired for a price.

If you’re struggling with a tricky mission or just wish to have the extra firepower, then consider bringing a gang member with you. After all, there’s safety in numbers.

The Dead Eye skill is special combat ability that allows you to slow down time, giving you a brief window to drop several enemies with deadly precision. To activate Dead Eye mode, press R3/RS while aiming a gun or bow. While Dead Eye is active, players can target multiple enemies in a series by moving the reticle and pressing R1/RB to mark individual targets. Once you’ve chosen your targets, simply press R2/RT to let the bullets fly. However, your Dead Eye capacity will drain while the ability is active, and it can take a while before it can be used again. Try to use it when there are multiple enemies onscreen to quickly avoid an untimely demise.

Of course, there are a few things that increase your Dead Eye’s use. For example, Chewing Tobacco will make the Dead Eye ability drain slower than usual, while hunting, crafting, and finding collectables permanently increase the capacity. In addition, the Dead Eye gauge will refill slightly each time an enemy is killed, but it will regenerate slower when exposed to extreme heat or cold conditions.

Stealth can be activated by pressing L3/LS. This will make Arthur Morgan crouch down and move more quietly. When crouched, you can sneak up on enemies from behind and press Circle/B to knock them out while unarmed, or perform a stealth kill if you have a knife.

Completing Weapon Expert Challenges allows you to unlock special combat accessories. Information regarding these Challenges can be found in the Progress - Challenges section of the Pause menu. Unique weapons can also be obtained and are hidden throughout the world, so be sure to do a lot of exploring. Special weapons can also be obtained from certain enemies, or even given as a reward for completing various activities.

Lastly, the Compendium allows you to take a look at all the weapons you own and have encountered on your journey, while also offering various statistics on kill counts and headshots.