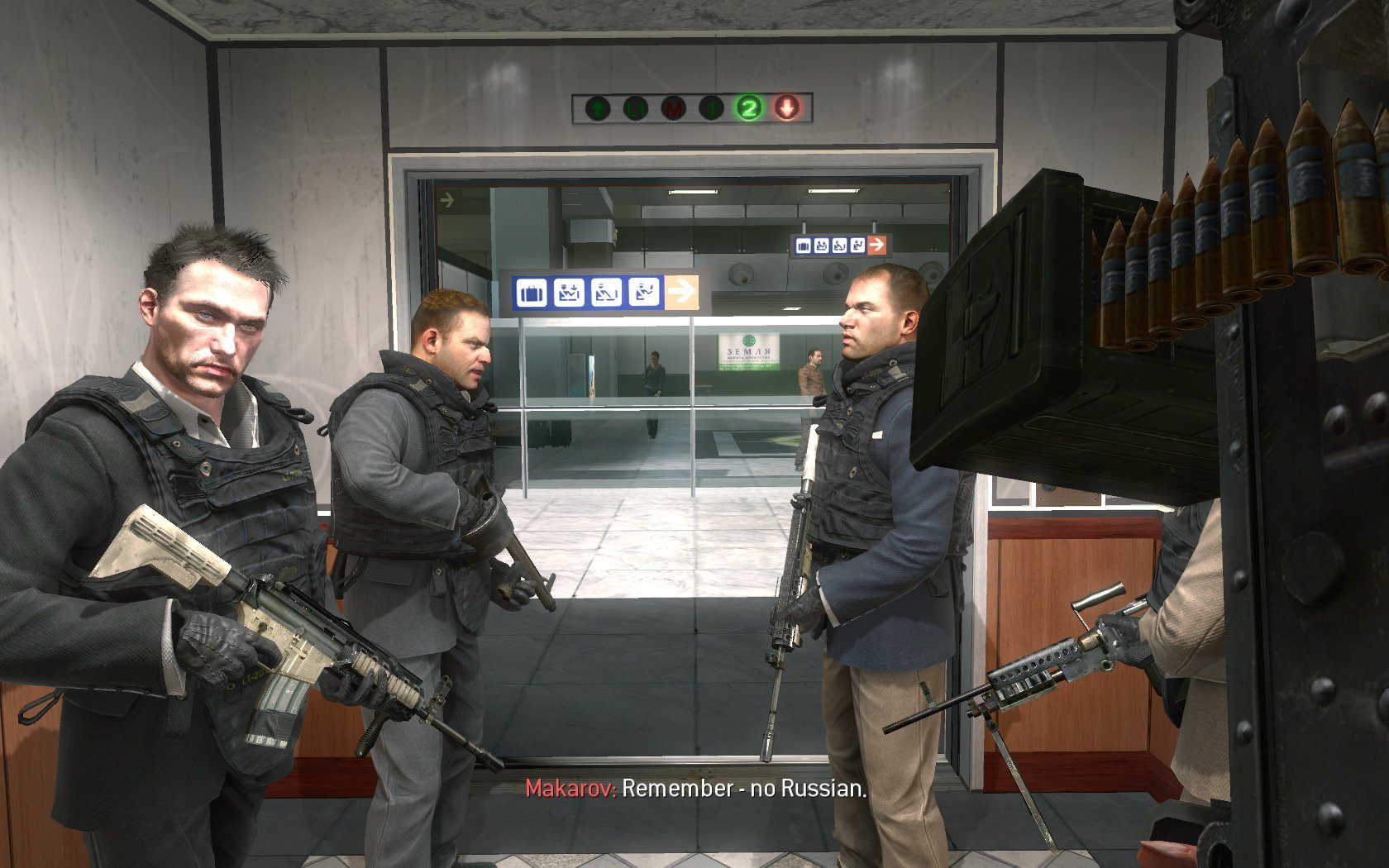 Why No Russian was the most controversial video game level ever

Modern Warfare 2’s No Russian mission is one of the most controversial levels in gaming history. Upon release it was caught in the center of a longstanding debate over whether or not video game violence can adversely affect players, and you can be damned sure it helped stoke the flames. What you might not know is that No Russian proved highly contentious not just in the U.S., but across the world, too.

For those who aren’t aware, No Russian is an optional mission early on in Call of Duty: Modern Warfare 2’s campaign. The player controls an undercover CIA agent and former Army Ranger named Joseph Allen, who has infiltrated a group of Russian ultranationalist terrorists led by Vladimir Makarov, the main antagonist of the Modern Warfare trilogy.

The exact goal of the level isn’t made clear, the opening text only revealing the location as the Zakhaev International Airport in Moscow, Russia. Fading into an elevator with Makarov’s team, you’re barely given time to register the surroundings as you and your squad stand loaded with grenades and ammo, wielding hefty machine guns. As the doors slowly part, the team readies their weapons and Makarov utters a single phrase: “Remember… No Russian.” You step out, likely expecting an entrenched platoon of enemy soldiers, or maybe even other terrorists, only to be met with an entirely different scenario.

(Check out our list of the 10 most controversial games of all time. We still get salty when we remember number #9...)

Facing you is a crowd of civilians, milling around as they wait to pass through airport security. A few security guards are peppered in as well, completely oblivious to the armed threat that just arrived behind them. Unprepared for the unspeakable horror that these men are about to commit. That you are about to commit.

Yes, No Russian involves you and your NPC companions shooting up an airport full of innocent, unarmed civilians. Aside from the security guards and a handful of Russian troopers who show up towards the end, there are no targets who can actually fight back, and the civilians react in a unsettlingly realistic manner, screaming, begging, trying to run or hide. The injured crawl desperately across the floor, smearing trails of blood behind them. Others, braver, even try in vain to drag the wounded to safety. It’s all part of Makarov’s plan to incite a third World War. They want to trick the government into believing the team are foreign terrorists.

According to Mohammad Alavi, the level designer who helped to create No Russian, the mission was supposed to hit the player on multiple emotional levels:

“For that level we were trying to do three things: sell why Russia would attack the US, make the player have an emotional connection to the bad guy Makarov, and do that in a memorable and engaging way,” Alavi explains. “In a first-person shooter where you never leave the eyes of the hero, it's really hard to build up the villain and get the player invested in why he's bad... It isn't really relevant whether that makes you enjoy the entertainment experience even more because you're being naughty (à la Grand Theft Auto) or it engrosses you further into the story and makes you resent your actions. What's relevant is that the level managed to make the player feel anything at all.”

The mission definitely succeeds on that front, especially given it ends with Makarov revealing that he knows Allen is a CIA agent and killing him, leaving his corpse to be found by the Russian police. While the player doesn’t technically have to participate in the killing — the game doesn’t outright punish you for not shooting your gun — they still have to bear witness as the chaos plays out around them, powerless to stop it (the mission fails you if you try to shoot the other terrorists).

Both publisher Activision and developer Infinity Ward knew that No Russian would spark a strong response, especially in a post-9/11 world. Modern Warfare 2 released in 2009, only a year after a series of deadly terror attacks in Mumbai which left 164 dead. In the time since, the reality of this has hit harder for western audiences, too, as terrorism is a very real threat that many people face every day.

Without explicitly saying what the level is about, Infinity Ward included a prompt at the beginning of the campaign, warning of the disturbing content, and offering the option to skip it entirely (the player can also skip the mission at any time while during the level itself). Whether or not the player plays it through has no effect on their score, and there are also no Xbox Achievements or PlayStation Trophies associated with it.

Despite these precautions, Modern Warfare 2’s global release prompted some countries to take more drastic measures. In Russia, the mission was removed entirely from the PC and console releases. In Germany and Japan it remained, but a unique, region-specific modifier caused the mission to fail if the player fired at civilians. The Japanese version also contains an infamous mistranslation of Makarov’s line, which instead read as: “Kill them, they are Russian.”

(Speaking of COD, we bet you didn't know these five actors were in Call of Duty games.)

In the UK, the level sparked a debate in the House of Commons between Member of Parliament Keith Vaz (a long-time opponent of violence in video games) and Labour politician Tom Watson, who argued that the level was no worse than scenes of terrorism which are found in many books and movies.

Watson went on to publicly criticize Vaz for trying to purposefully play up the No Russian mission’s negative elements in order to incite nationwide panic. In Australia and New Zealand, the inclusion of No Russian prompted the Australian Classification Review Board to bump Modern Warfare 2’s rating up from MA15+ to R18+, such that only those over the age of 18 could play. With sales restricted and a large majority of the region’s video game consumer base below 18, this all but banned the title.

The necessity of a mission like No Russian is a divisive topic. Many see it as an insensitive inclusion for shock value alone, while others argue it shows gaming can present thought-provoking and unsettling scenarios.

The implementation was certainly bungled in parts — the automatic failure should you turn your gun on Makarov and his team is a lazy method to force complicity, and makes no sense in the overarching narrative (you would, in effect, stop every following catastrophe from occurring and save the day). The reason why Alan would agree to take part in mass murder is scarcely addressed, and the fact that the story still follows without the level brings into question its inclusion at all.

Nevertheless, it can’t be denied that, in one way or another, Infinity Ward succeeded with No Russian — at least in the goal of drawing as much attention to Modern Warfare 2 as possible. The interactive nature of video games offers a unique avenue to present players with challenging and consequential choices beyond those we encounter in other mediums. No Russian is far from a perfect implementation of this, but its inclusion certainly had a knock-on effect on the industry, leading to games like 2012’s Spec Ops: The Line, which used traditional gaming mechanics to incite unpleasant behaviour and choices.

For better or worse, No Russian has marked itself as one of gaming’s most controversial levels and is sure to be remembered for many years to come.