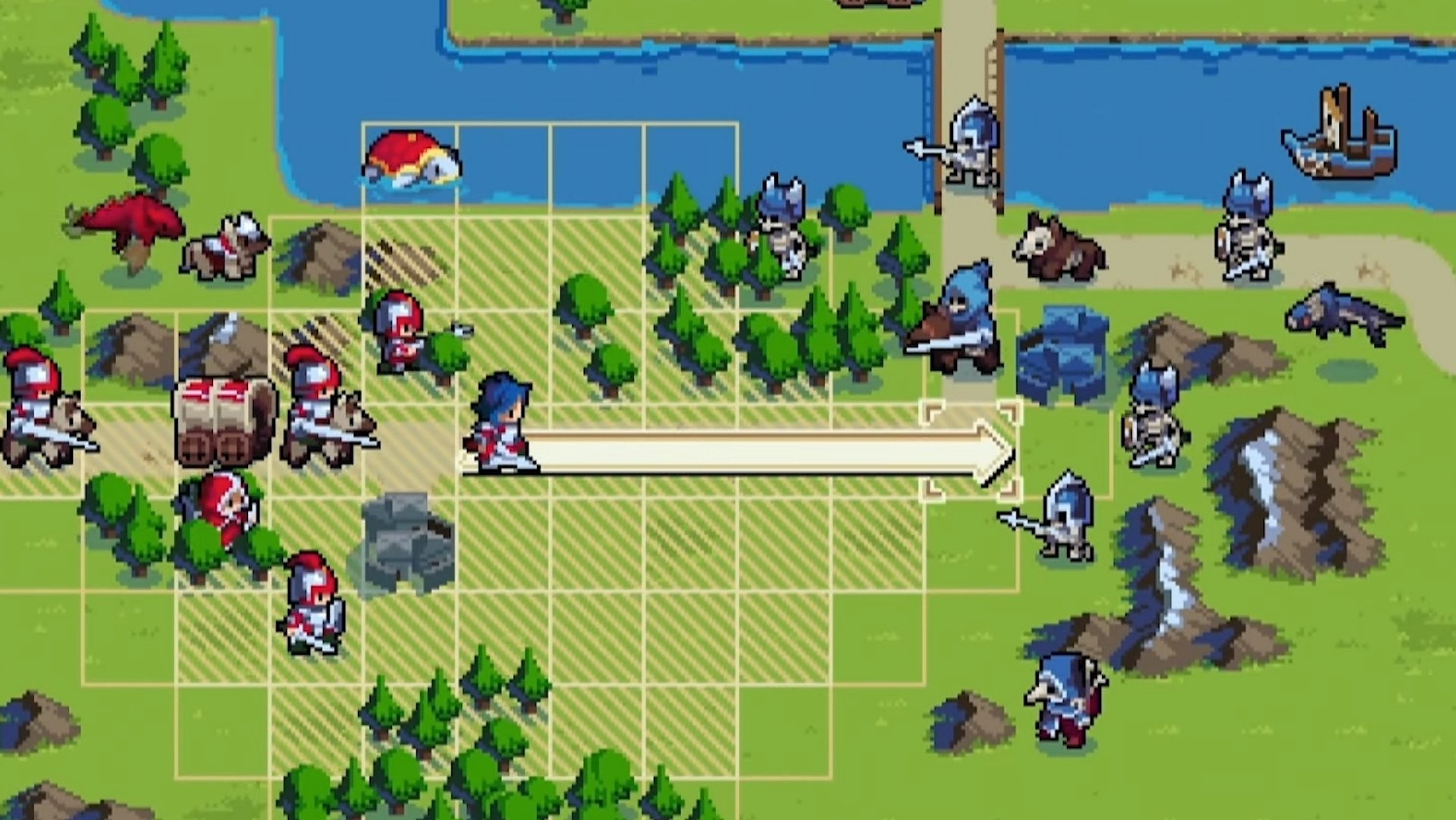 For fans of Nintendo’s turn-based Advance Wars (AW) series, the ten years since Days of Ruin’s release have been long and largely disappointing. Gamescom, E3 and Direct after Nintendo Direct came and went each year without any hint of a return. Fortunately, just as all hope seemed lost, along came indie developer Chucklefish with a brand new game to sate our tactics-starved minds.

(This is part 2 of our Wargroove interview. Click here for part one where we discuss the campaign editor and more!)

Wargroove brings Advance Wars style combat to the fantasy realm, with hero-led factions vying for control of its pixelated battlefields. After a trying out both single and multiplayer, we spoke with lead designer Rodrigo Monteiro and Chucklefish marketing strategist Katy Ellis about how Wargroove builds upon Nintendo’s classic to create a whole new field of battle.

While playing Wargroove, the inspiration Chucklefish has drawn from titles like Nintendo’s Advance Wars is clear. Do you feel any pressure in carrying the flag for such a popular old series?

KE: I wouldn't say there's a pressure, I think our team love Advance Wars so when they hadn't made one, it was more about wanting to get that game experience. We want to make our own game, we were inspired by AW because we love the game, but it's definitely our own vibe of it.

RM: I think one of the things we keep seeing on playtests, they often think ‘Oh this looks a lot like Advance Wars’. And when they start playing they realise there's a lot of mechanical differences that they might not have expected from an AW game. But overwhelmingly the responses have been very positive so I like to think we've made a twist on the formula for AW, appealing to what people loved about AW but not just being a copy of it.

The Last Advance Wars title released 10 years ago, what steps have you taken to update the formula for the modern age of gaming?

RM: I think we can talk about some of the big mechanical changes we've made to the formula. In AW, matches could end up in a long drawn out battle at the end where you kind of know which player's winning but it takes a while for that to happen. In attempting to give the players a physical presence in the game, we made them into commanders that are actually on the field. [This] also means that you’re forced to push forward with them, and tends to make the matches more dynamic and come to an end at a more natural point.

Another concept we introduced is that units have non-random critical hits based on certain conditions. So for example the trebuchet will do more damage if it hits an enemy at its maximum range, or a knight will do more damage if it charges an enemy as part of its attack. That adds a whole extra layer of tactics that you have to consider when playing, which at least I haven't seen in other games of this genre.

KE: it makes a big difference if people are using crits properly, it completely changes how it plays out in battle.

RM: The commanders came about during play. When we were doing prototyping at first we only had basic units on the field and well, first the game could take a long time to resolve, and then also we felt we really wanted those characters to be present and interacting with everyone. So then we thought what if we just tried putting the commanders in and seeing what happens. We were very impressed with how much it changed the game, to the point where the balance we had up to that point didn't really work. In my opinion we definitely changed Wargroove for the better, I've seen so many games end in really exciting ways where you don't know what's going to happen and who's going to move where.

KE: And you develop a much deeper connection with the characters too, because the story mode and the campaign is lovely but if you don't care about their safety on the battlefield then you don't have that same kind of connection. I think that the match-ups that it creates are really really interesting too. Arcade mode is really fun for seeing unlikely battles between two different characters.

Wargroove will also have online multiplayer, can you tell us a bit about the different modes available?

RM: There's local multiplayer – hotseat or single controller, and multiple controllers – online multiplayer can be asynchronous or synchronous. If you're doing asynchronous you can do multiple matches at once, and you can play with your friends, take your time, play whenever they're around. You get notifications in the game that you're ready to play your next turn. Then you have Quick Play, you just get matched with somebody random and the match is more real-time.

Currently you can have 4 human players, you can also play locally versus AI. You can play co-op or you can play versus, you can play 2v2 or 3 humans vs AI. [As for which modes will be online,] we're still figuring out what would be the best user experience, so I don't really have an answer for you right now.

You mentioned alerts for asynchronous play. Will these be system notifications or only visible when in-game?

RM: It depends on the platform, on platforms that support hardware notifications like operating system notifications we can do that. On platforms that don't, we can't. I think, I'm not the one who worked on this, but I think currently it's only on Steam, I'm not sure about the consoles. I could be wrong though. We do have it on Steam, not sure about consoles. We've considered email and mobile companion, but it's something that's out of scope right now. We might look into it in the future but right now we're focusing on finishing the game and delivering.

In our demo we had the chance to play an escort mission where protecting villagers was key to success. What other modes can we expect to play?

RM: We have three types of map. The first type is a skirmish map where it's the full rules. Either defeat the enemy commander or capture their castle, and that's the standard multiplayer ruleset. We have scenario maps, which by default have those rules but the rules are set in the event editor, so you can override them and make them anything you want.

For example, one of the maps that I've made outside of work hours with the editor was a chess map where you can only move one unit per turn and the objective is to defeat the enemy king. You can have things like that, or you can have a map where the objective is just to collect three pieces of something and then take those pieces somewhere and then escape.

And then we have puzzle maps – oh we've been having so much fun building those recently. So the puzzle maps the rule is you have one turn to defeat the enemy commander and there's a bunch of enemies on the field and you have to figure out how you do it. Some of them can be really hard but I think you'll like those.

Finally, is Wargroove still on track to release this year?

KE: The thing is we're at the polishing stage and we just want to make sure that before we say this year or next year, whichever it will be, that we are 100% sure that on that date we say it'll be out. So it's kind of "could be?" but we don't want to say until we're really, really sure because as soon as we give any information, people will hold us to it above anything else. So it's really very nearly there, it's more that a few months ago we decided to make a more robust package.

RM: We have all of the features and all of the content in but we are improving it and making sure it works well, doesn't have any bugs and make sure the experience is as good as it can be.

KE: We just want to be happy with it. We wouldn't want to do loads of updates first day, that's not how we roll.

RM: We'd rather we release a good game rather than a rushed game.

Wargroove is currently scheduled to release this year (or early next year) on PC, Nintendo Switch, PS4, and Xbox One.