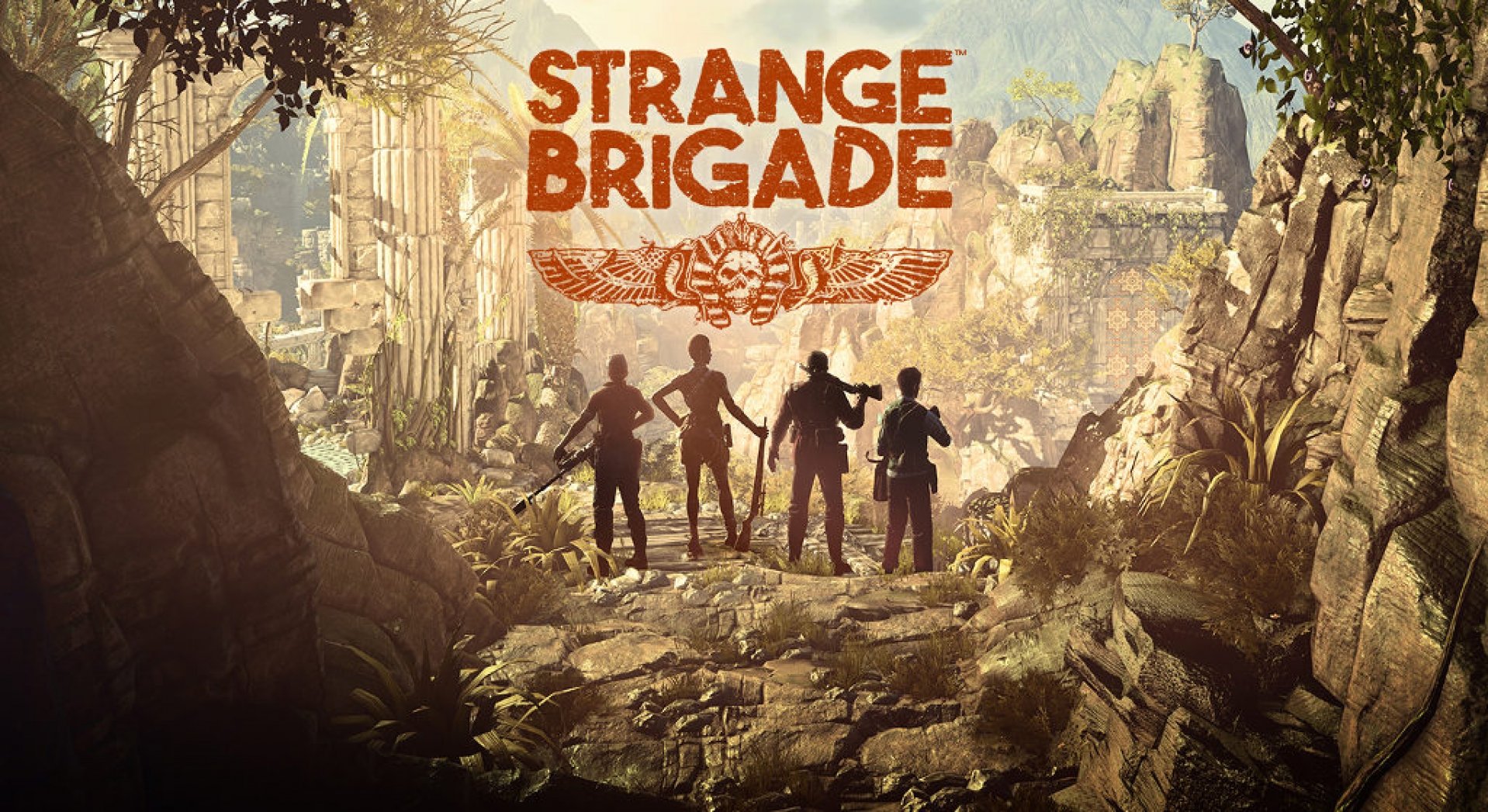 Egypt, 1930 — Renowned cad, Edgar Harbin, is off on another doubtlessly dangerous archaeological expedition to unearth otherworldly evil! Can the Strange Brigade stop him before he unleashes a nameless horror and hordes of the undead?

It turns out they can't, but actually that's a good thing because now there's more things to shoot. Strange Brigade is a campy romp through the silver age of cinema, replete with extremely British narrator and multiple uses of the nonsense words "derring-do".

The central conceit of your plight is that you need to stop a ghost queen from being very evil, and to do so you'll shoot your way through huge numbers of zombies, mummies, skeletons and any other era-appropriate movie monsters. There's plenty of adventure as you pick from one of four original characters (or five if you unlock the fifth character through early adoption in the coming weeks) each with their own special amulets and wise-cracking retorts.

Amulets allow you to collect the souls of the monsters you kill and then unleash their power in one of four special attacks unique to each character. The scientist and archaeologist Archimedes de Quincey, can use his knowledge of the arcane to chain Set's lightning between enemies, stunning them and popping off their heads, or summon a ghostly decoy of himself which explodes when the brainless mob surrounds it. Whereas rough and tough mechanic Gracie Braithwaite prefers to get up closer into the fray, activating a melee mode allowing her to smash baddies to bits.

Chaining these amulet powers together with explosives to take out huge numbers of enemies at once is made doubly satisfying by the way you hoover up their souls afterwards. With particularly large crowds you can even instantly refill your amulet and set up the same traps multiple times in a row, cackling as you go. This is the core gameplay loop and we're happy to report that it is effective at tweaking that bit of your brain that likes seeing numbers rack up.

Your conventional weapons also pack a solid punch when you're not committing acts of mass re-murder. There's a small but varied range of weapons for you to unlock with coins you collect throughout the campaign mode, or rapidly accrue during waves of horde modes. Shotguns, sub-machine guns, lever action rifles and burst assault rifles (all with slightly off names from their '30s real world counterparts) give you enough ways to deal with the undead, though we'd like a few more.

While some special enemies require heavy duty firepower to take down, the bog-standard zombos will fall in a couple of headshots from your unmodified weapons. Landing headshots is extremely gratifying, thanks to the shower of coins and whispy effects as their soul gasps out of their dissolving corpses but it can be daunting trying to conserve ammo in fights and land every headshot. However, once you unlock more powerful weapons with rune slots and slap a couple of extra powerups into them, heads pop off all over the shop. Armor-shredding, health-stealing bullets fired from a recoil-stabilised, speed-reloaded "Thompkins M1" sub-machine gun are especially effective.

Left4Dead's cultural impact on the co-op multiplayer shooter genre is hard to overstate. Your inventory spans the usual weapon, sidearm, special weapon from gold-hungry crates throughout the level, explosive and special amulet. If your friends die, you can help them out of a nearby sarcophagus to keep on fighting the fight. And normal enemies provide constant fodder while you fend off the harder special types, as usual. However, where Strange Brigade departs the formula is the collectibles and puzzles scattered throughout the levels.

Gently easing up in difficulty throughout the campaign, there are a handful of puzzle types secreted away in little side roads off the level's main path – which already ducks and weaves over and around itself neatly, letting you see new and old areas of your journey from beautiful vistas. These puzzles hide more gold for unlocking weapons and collectible relics, which reward you with skill points to unlock new amulets upon completing a set.

Answers to door puzzles are hidden in the environment, but not too difficult to spot making repeat playthroughs less inspiring of that sense of adventure than your first encounter with a level. However there are one or two puzzle types that actually adapt to the number of people you have playing with you, forcing you to work together to complete a floor path or lighting up symbols as you input them so another can keep track. It's a neat touch and encourages you to try the game alone and with friends to get the most of it. One of the characters, the scientist, can even open secret doors the other characters can't, which also goads you into trying new loadouts or mixing and matching your squad for maximum rewards.

Outside of campaign mode, the Horde and Score Attack modes give you plenty more reasons to keep playing. Completing levels in record times with as much gold as possible gets you on the Score Attack leaderboard, if you're one for showing off. Whereas Horde mode gives you a seemingly never-ending series of waves and rounds in which to fight off all the enemies you encounter in the campaign in varying combinations and strengths.

Horde mode also offers doors you can unlock with coins which contain weapon blueprints and runes, so you can continue to upgrade and fend off the waves of foes. Some Horde levels even have puzzles in them, which unlock another weapon purchase point for The Preacher, a ridiculously powerful shotgun that one-shots everything and increases in cost every time you need an ammo refill. Playing solo, we managed to max out our weapon with damage runes, unlock The Preacher, buy the most powerful explosive (dynamite) and survive more than 25 waves before finally having to stop for sustenance. Without any further upgrades to earn, there's little excuse to continue Horde mode past this point, though we could always try our hand at hard mode.

If there's any criticism to be leveled at the game as a whole, it is the lack of upgrade options later on in both Horde and Campaign modes. Weapons only have a set number of rune slots, and once full the only thing you can do is replace runes with other ones (and no stacking multiple of the same rune, for some reason). There are also only a small number of weapons to pick from, each of which offers new gunplay but essentially the kite-then-shoot-or-blow-them-up strategy is always applicable.

Rebellion have added a fifth character, and will be adding another four more post-launch, which offers some hope to those who will run through the campaign and current unlockables within 20-30 hours. But even at that pace, Strange Brigade is an enjoyable romp with or without friends.