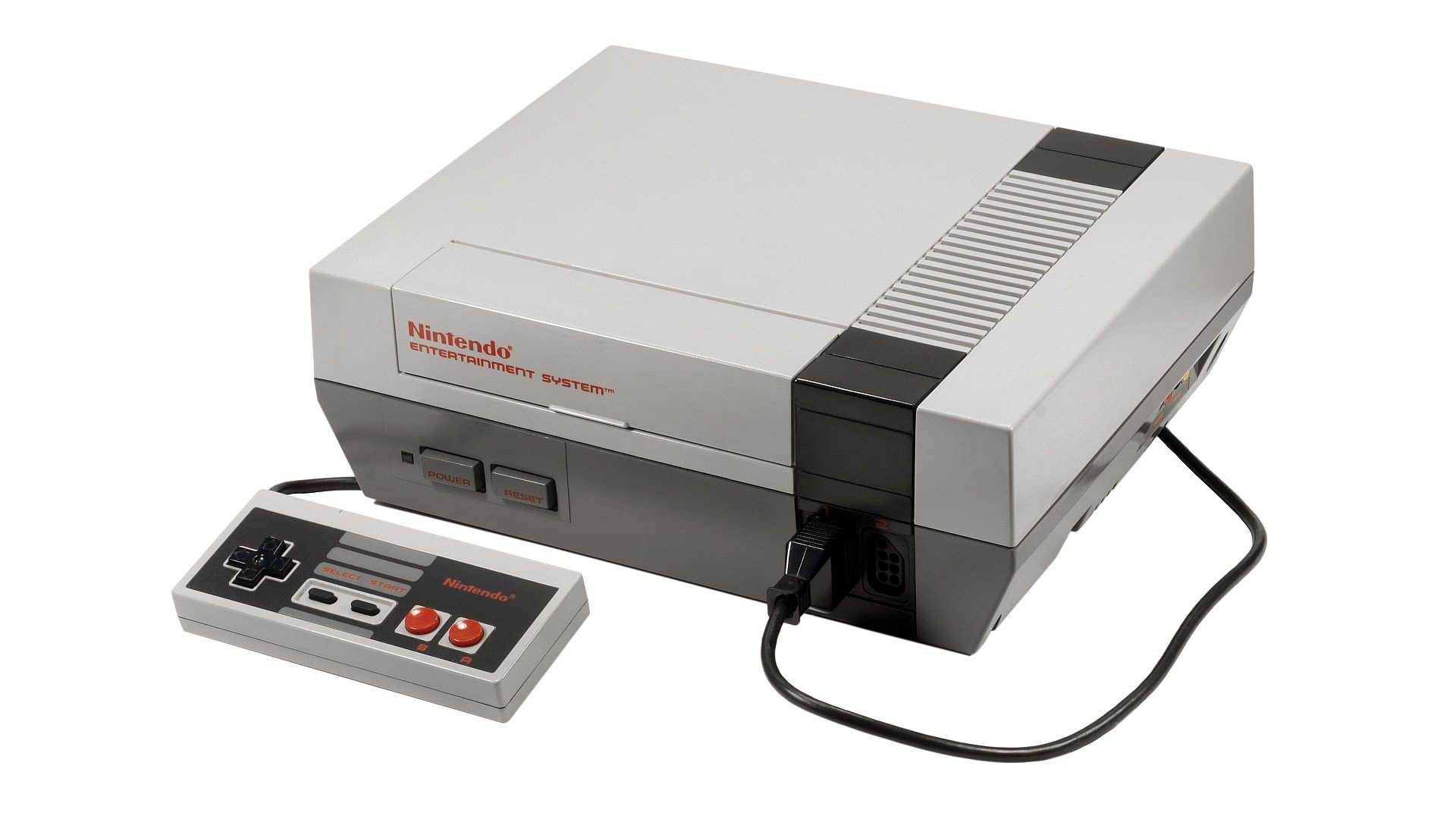 From Famicom to Labo: Nintendo's 35 years of unconventional fun

Nintendo’s videogame history is short compared to its near 130-year company existence. And, honestly, there never seems to have been much of a long-term plan. Just… genius!

Sure, it’s too easy, and annoying, to label Nintendo with this ‘genius’ thing. But while we can point to the strategies of Nintendo’s competitors over the years, with Nintendo it has often been a temporary spark that burns so brightly, it erases any missteps that may take place.

A potted history shows Nintendo seemingly rescuing the games industry from itself many times since 1983, following its resurgence of consoles in the wake of doomed Atari (a tired old story we promise not to retread). Just as our hobby begins to look boring, often it has been Nintendo first with an idea that brings everyone rushing back. That is the legend.

Here’s how we see Nintendo, and why we still believe even when the wheels wobble off.

Thirteen years, that’s all. Remarkable when you consider it. In hindsight, the trick Nintendo pulled off wasn’t just Playing With Power, it was the shift in focus from rough-and-tough arcade-in-the-home to Family Computer, in Japan, and Entertainment System, in the US.

You should read David Sheff’s seminal ‘Game Over’ for the details on how absolute the Nintendo take over truly was in those early days. Point is, the Nintendo hardware and software catalogue very quickly cornered a new kind of market – one based on quality original franchises that are still going strong and have rarely wavered: Super Mario, The Legend of Zelda, Metroid and Kirby. It just happened to have all the arcade games too.

The way gaming is now still owes so much to those foundational years, in which the only serious competitor was SEGA (though NEC and Hudson was the coolest with PC Engine). Nintendo ran the show with Famicom/NES while SEGA visibly struggled to keep the pace.

Nintendo dominated the 8-bit era, and this crazy momentum ensured that the 16-bit Super Famicom/NES would be hungrily received. Again, the quality of Super Mario World, Super Metroid and The Legend of Zelda: A Link to the Past would make owning the new console essential. This was Nintendo’s brightest period by far, in our view, The Super Nintendo really living up to its name with milestones that included Super Mario Kart, F-Zero and Pilot Wings.

Power in the palm of your hand

With Famicom and NES, Nintendo had taken a close look at the home console market and figured out how to do this properly. You could say it was just shrewd business, if you want to be that cold. Game Boy (1989) was a stroke of genius, and a real technological marvel.

Nintendo’s own Game & Watch series and untold battery operated LCD games from myriad manufacturers seemed the best that handheld gaming would ever get. The story goes that Sony executives berated their own employees on a lack of vision, and this is likely the point at which discussions between the two Japanese giants began to take place for PlayStation. Either way, first there was the Tetris, Super Mario Land, and Mario Tennis association, which was huge all by itself. Then, in 1996, Game Freak gave birth to Pokémon. And BOOM.

Long before mobile phones could get in on the act, the evolution of Game Boy was endlessly cool: Game Boy Light, Game Boy Color, Game Boy Advance, and Game Boy Micro all became must-haves as soon as they were released. Game Boy was unassailable for twenty years.

Although we were sobbing with joy along with everyone else at the arrival of Nintendo 64 and Super Mario 64, Wave Race 64 and Pilot Wings 64 (in case you were never sure which version of the game you were buying) Sony had really shaken Nintendo’s foundations with the introduction of PlayStation in 1994. SEGA was still rabble rousing with Saturn too, and around that time its total dominance of the arcades gave Nintendo two very serious rivals.

Sonic the Hedgehog had been a thorn in Nintendo’s side, but Ridge Racer and Tekken (Sony); Daytona USA and Virtua Fighter (SEGA) were blazing trails and bloodying noses almost from out of nowhere. Gamers were no longer kids, pretty much. Though Nintendo continued to own the younger side of the market, it clearly struggled during these times.

We kept faith owing to Goldeneye 64 and The Legend of Zelda: Ocarina of Time. F-Zero X and 1080 Snowboarding appealed to the connoisseurs. Nintendo was losing traction though, and made its first obvious mistake in the form of the bizarre Virtual Boy, which many of us tried to love, but valued our eyesight a lot more. Had Pokémon not continued its worldwide rampage, Nintendo may not have survived the 32-bit CD-ROM years as securely as it did.

The 64DD was a flop. Enix and Square (then separate companies) moved their flagship titles Dragon Quest and Final Fantasy to PlayStation. The world was waiting for PlayStation 2, and surprisingly enamored by Dreamcast, not too fussed with what Nintendo had lined up next.

Seemingly desperate to distance itself from Sony and SEGA, Nintendo released GameCube with its miniature disc format and even more unusual controller. The latter was perfect for playing Luigi’s Mansion and Super Mario Sunshine. It fared well in Capcom’s great-looking Resident Evil line-up and Viewtiful Joe. The whole thing looked like a toy, however, which wasn’t where the market was going. Grand Theft Auto III was the main event on PlayStation. Microsoft had entered the fray with Hollywood-like Halo: Combat Evolved. Both kicked ass.

It was embarrassing for Nintendo when Sony unveiled PSP, a sleek, high-fidelity hand-held that premiered the same year as Nintendo DS, in 2002. This was the first time we remember being genuinely concerned for Nintendo, though it still owned handheld thanks to the many iterations of Game Boy and, still, Pokémon. But in 2005, came the next global phenomenon: Brain Age: Train Your Brain in Minutes a Day!, surprising everyone… including Nintendo!

Everybody wanted to know their ‘brain age’, especially the old- and middle-aged. Suddenly, Nintendo DS was hot on the tail of PlayStation 2, its potential audience was almost anyone, young or old, male or female, opening the door to Nintendogs, Professor Layton, and more.

And that included a home console that may not have existed were it not for the DS effect, inviting Nintendo to break from traditions that it had established in the 1980s, that were still being observed by PlayStation and Xbox. Nobody was ready for the… what? The Wii?

While PlayStation and Xbox were competing for most inter-connected multi-media high-definition do-the-dishes and walk-the-dog console ever, Nintendo gave everyone a magic wand and a game of Tennis or Bowling. Wii (2006) may have sounded ridiculous, but the motion-controlled games were impossible to put down. Wii became the second console to homes that already had a Sony or Microsoft machine – a ‘PlayStation-Wii,’ or ‘Xbox-Wii60’.

It was Wii Sports that turned heads, not The Legend of Zelda: Twilight Princess. We also got the perfect complementary experience to Brain Age in the form of Wii Fit, a personal body trainer that – millions believed – saved hundreds of dollars from being spent on the gym.

This seriously wrong-footed the games market, leading Xbox into a deadly trap with its own motion-sensing gizmo Kinect, which wasn’t all that hot on Xbox 360 and near destroyed Xbox One’s chances of survival from day one, inspired by the success of Wii Fit and the dream of the ultimate lifestyle living room hub. Microsoft wasn’t the only one to fall foul.

Nintendo also leapt merrily into its own trap.

Wii somehow managed to avoid being confusing, owing to the fact that it was the only console with a dumb name that you could at least remember. Wii U made the whole thing confusing, and that was before people tried to understand what the thing did that was all that different – or different enough to warrant buying a whole new Wii thing for the home.

Wii U (2012) was not a complete disaster – it gave us Splatoon and The Legend of Zelda: Breath of the Wild (technically). However, even they were not strong enough to carry a nonsensical format by themselves. The best thing Wii U did was to send Nintendo back to the drawing board, to consider what the company did best, in every way possible, wherever possible. And in return, that got us the Switch, our very favorite little travel buddy we can play on the big screen. Truly, the best of both worlds.

Wiser people than us once proclaimed Nintendo would never make games for anybody else. Then came Pokémon Go! for mobile platforms in 2016, drawing all negative attention away from Wii U while Nintendo invented something irresistible to rock PlayStation and Xbox. We got Mario on mobile too, as brilliant as it was bewildering to behold for Nintendo loyalists.

Then, in March 2017, Nintendo launched Switch, which in many ways mirrored what the company had done with the first Family Computer in 1983, surveying the status quo, and seizing an opportunity to do exactly what gamers wanted – especially those with families. Splatoon and Breath of the Wild found the audiences they deserved, Nintendo’s entire library has been revitalized, just about everything has fallen back into place for Nintendo.

We’ll be the first to admit that we didn’t see cardboard accessories combing for any gaming console, even Nintendo. Because, nobody is that crazy. Nonetheless, there’s a lot of positive word around Nintendo Labo, which launched in the spring. At the very least, the kids think that anything made out of cardboard is cool, which is saving a lot of people a ton of money.

So, thank you Nintendo! Happy 35th Anniversary, and long may your special madness reign!