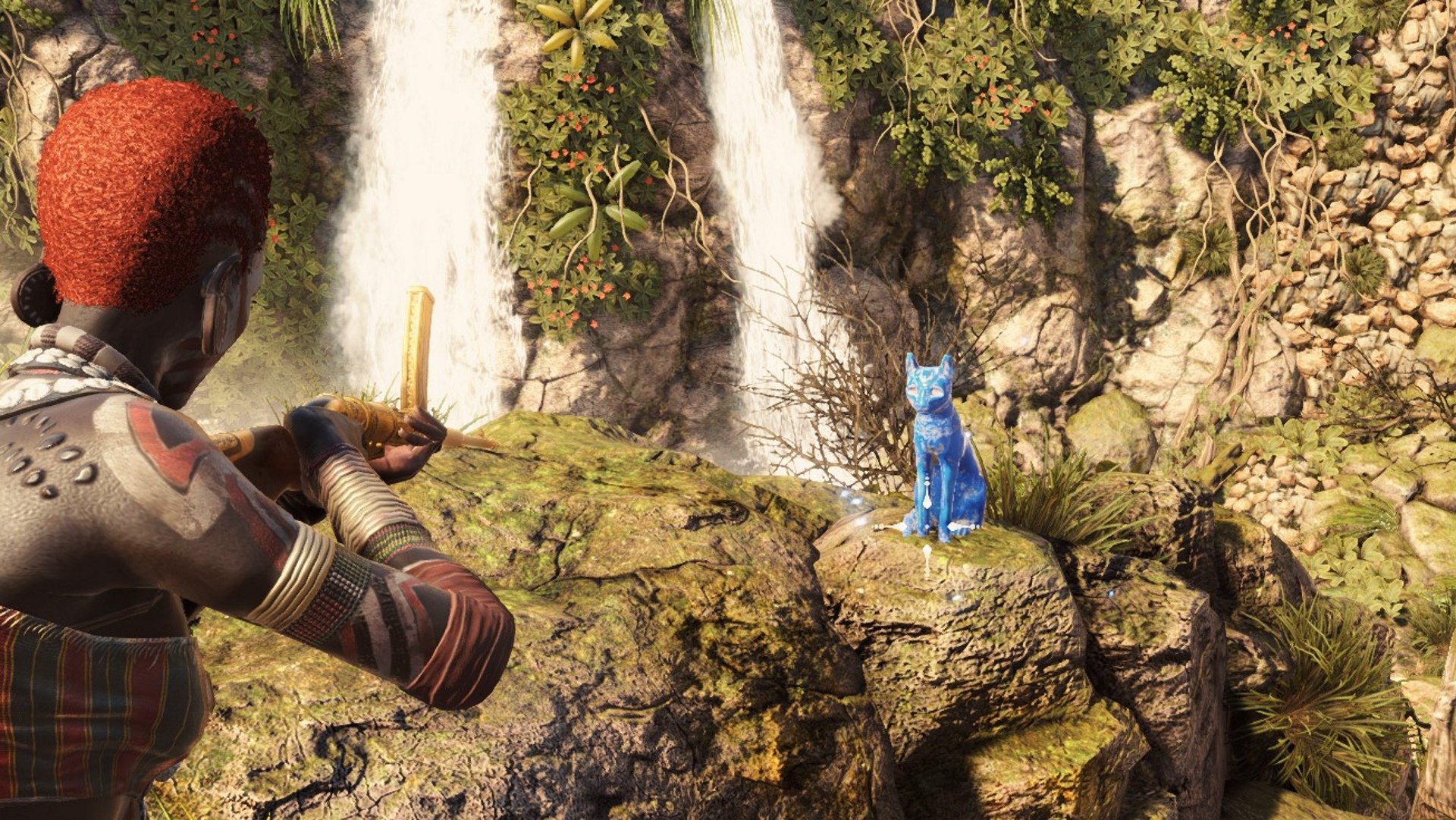 Strange Brigade is filled with collectables to uncover throughout its undead-infested Egyptian tombs, none more prolific than the six Blue Cat Statues that appear on each level. These magical moggie mannikins pop up as you explore, emitting a small mew upon their arrival. You’ll need to shoot all six to open up a locked cat shrine that you’ll find towards the end of each mission. Inside the shrine is a wealth of money and a Golden Cat collectable to prove you grabbed them all.

The first level in the game, Harbin’s Dig Site, makes most of its cat statues fairly obvious, but in case any of them slipped by you, we’ve got each and every one in this article. Read on to learn the location of all Harbin’s Dig Site Blue Cat Statues in Strange Brigade

The first cat appears in the opening stages of the game, on the path downhill after reaching the first camp where you get the cutscene of the bridge being cut. The cat will spawn on the rocks to your left as you run down the ramp.

The second blue cat statue appears shortly after you fight your first batch of zombies in a cave. As you exit there should be a health potion sitting on the corner of a turn to the right. Directly ahead of you is an arch. The cat appears on the top right corner of that arch.

The third cat statue can be found after your first fight with giant scorpions. Take the path directly to the left after opening the gate and watching the scorpion cutscene (this leads towards the next area and the Scarab Key). The cat will spawn once you have run just over halfway up this path, past a jumble of collapsed wood on your right. The cat only appears once you’ve already passed it, so when you hear the meow noise, turn round and look for it in the tufts of grass on your left.

You’ll find the fourth cat statue in the optional caverns area leading up to the panorama view. Once you’ve placed the first scarab key, run forward and fight the spear throwing enemies that appear after a cutscene. When they’re dealt with, take the path on the right-hand side up the hill. You’ll find a cave entrance here. Follow it to the top and the cat will spawn behind you when you run over the wooden bridge.

The penultimate cat appears once you reach Harbin’s Dig Site. Run down to the lower area where a tent is set up. Turn round and begin running up the path away from the area and the cat should spawn behind you on top of a pillar against the stone wall to the left.

The final cat appears when you reach the cat shrine door itself. This is directly after solving the floor puzzle to open the way into the tomb. Once you reach the door, turn around and look back up the hallway to see the cat sitting on the left pillar just before the door.

Purrrfect! With all six blue cat statues secured you’ll be able to enter the shrine and grab a generous splash of gold, a chest and the level’s Golden Cat statue. Don't forget to grab that or you'll need to find them all over again!

Once you're done with Harbin's Dig Site you'll be on to the next level: Hidden Valley. Here's our guide for all the blue cat statues there.

We have plenty more Strange Brigade guides on the way, helping you find the hidden Blue Jars and Blue Cat Statues on each and every level, so check back again soon as more guides are put up.