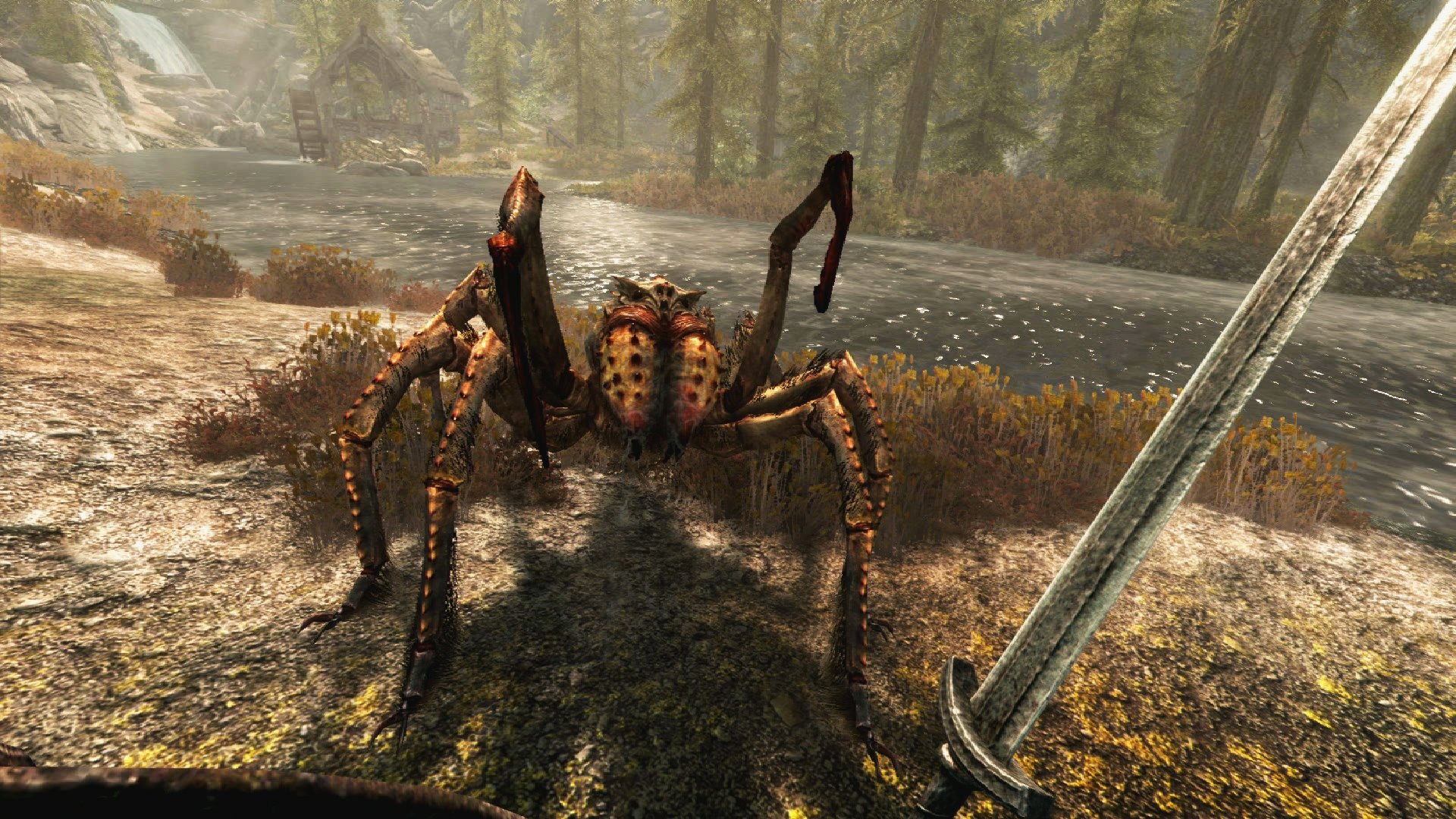 Playing through Skyrim VR is simultaneously a brilliant and an infuriating experience. On the one hand, you’re able to experience one of the most beloved RPGs of all time in an incredibly immersive way. On the other, there are control and interface headaches that make you want to Dragon Shout both Bethesda and Sony in righteous indignation.

First the good stuff: being able to fully observe everything in the entirety of Skyrim is wonderfully evocative. As with Resident Evil 7, the sense of place you get from exploring the environment in VR is astonishing, except in this case the size of the world is comparatively vast. The novelty value of moving around in 3D space has worn off a little with repeat exposure to VR, but nothing has felt quite as fully formed as what’s available here. It’s rare to be able to play a proper AAA game in VR, but here it is, and it works well most of the time.

Despite being more than six years old, Skyrim still looks solid for its age—especially in VR. The character models and environments have long been bettered, but this is one of those occasions where the lower fidelity of the PSVR’s display actually works for a game like this. The slight softening of the visuals helps distract you from some crude environmental texturing and—for the most part—VR brings the game alive in a way that makes it a real thrill to run through it all over again.

Seeing as you’re viewing the game through your own eyes, Bethesda has dispensed entirely with the third-person view, which is wise under the circumstances. In the original Skyrim, you might have wanted to switch to third-person simply to improve your situational awareness and see more of what we immediately around you. In VR, however, there’s no need for that. The extra peripheral vision and precise head-tracking visual freedom that VR brings means you get a much better sense of where danger resides, and you rarely find yourself ambushed by enemies as a result.

Combat, too, can benefit from the enhanced field of vision that VR brings, and it’s highly satisfying to be able to sneak up on foes and unleash vicious stealthy attacks, or just wade in and flail wildly. The physicality of being able to slash these creatures up close is something else. Fighting giant spiders that genuinely appear enormous to your brain is something you may be unprepared for, however. It’s one thing seeing them on a big-screen TV, but another thing entirely when they’re right in your face, rearing up and shooting venom at you. The horror aspect isn’t something you may have considered beforehand, but for some sensitive souls, having to fight colossal freaks at every turn will not be for the faint hearted.

Get a Move on

Pulling off these moves, however, is where some of the weaknesses with PSVR start to reveal themselves. There are two main control options available to you—DualShock 4 or Move controllers—and neither manages to unleash the full potential of where you might feel Skyrim VR should get to.

Using Move controllers, on the face of it, should make the combat feel awesome. After all, what could be better than being able to physically hold up your shield with one hand, and slash a sword or cast a spell with the other? The problem comes down to the absence of an analogue stick on the Move controller, because without one you’re limited to an infuriatingly awkward step-turning system, where you turn in increments using the X (to turn left) and O buttons (to turn right) and push the main central face button on the right Move controller to run forwards.

When you’re exploring dungeons or moving through the open world, this slightly janky system is semi-tolerable, but the moment you get into a scrap, it’s horribly awkward trying to properly orient yourself in the heat of battle. And as for trying to access the user interface: forget it. The way the game maps basic menu items to the Move controllers is an exercise in teeth-grinding frustration, and enough to make you want to toss these glowing wands out of the nearest window.

Equally frustrating is the fact that the long-forgotten PlayStation Navigator controller (the Move’s excellent concession to physical controls, with a d-pad, buttons, shoulder buttons and analog stick) is strangely not compatible with PSVR. This therefore renders the possibility of moving with the Navigator and attacking with one Move controller impossible.

With a bit of rejigging, it could have been the best of both worlds, but until Sony produces a motion controller with the functionality of the Navigator, this is a problem a lot of VR games will potentially butt up against.

Alas, after a while of struggling with the movement limitations of the Move control system, you’ll probably be forced to concede that Skyrim VR simply plays better when you can move freely, and therefore go back to using a DualShock 4 instead. While this means you’ll lose the cool motion control aspect that Move controllers bring to the party, it does mean you’ll be able to access the menus without issue, and smoothly move around.

On that note, it’s important to note that by default, the game assumes you’ll actually not want to move smoothly because of the nausea risk that this brings, but for the record, Skyrim VR’s implementation of smooth turning gave us no problems whatsoever. We didn’t even have to endure a period of transition—we just switched on smooth turning and got on with it. We dialled down the speed of the turning a touch (because that felt a little too responsive), and found that as long as we didn’t move around too wildly we were fine.

For those sensitive to VR movement, however, there are numerous options, including teleportation, but ultimately the more you compromise how the game should actually move, the more it introduces issues with combat efficiency. The bottom line is, if you can’t move freely, you can’t fight freely, so keep that in mind.

Another question is who this game is for. Having been reissued multiple times over the years on various platforms (most recently Nintendo Switch), it’s fairly likely that Skyrim VR is mostly for people who love the game already and fancy experiencing it a whole new way. For those, it’s probably a no-brainer if you already have a PSVR ready to go. But if you’ve never previously played the game, is this really going to be the best way to experience it?

For a start, the game has aged considerably, so you have to get over that aspect of it—especially given the premium price tag. Sure, the three DLC packs are included, but the fact this version doesn’t give you the option to just switch back to a non-VR version (or use old save games from the non-VR version) might be an issue worth considering.

For existing fans, though, there is also the question of how long the PSVR exclusivity will last, and the knowledge that once it does end up on PC, then the control issues discussed above will likely be entirely resolved. If you just can’t wait and need it right now, it’s still a great experience—but just one that comes with a certain amount of technical baggage.