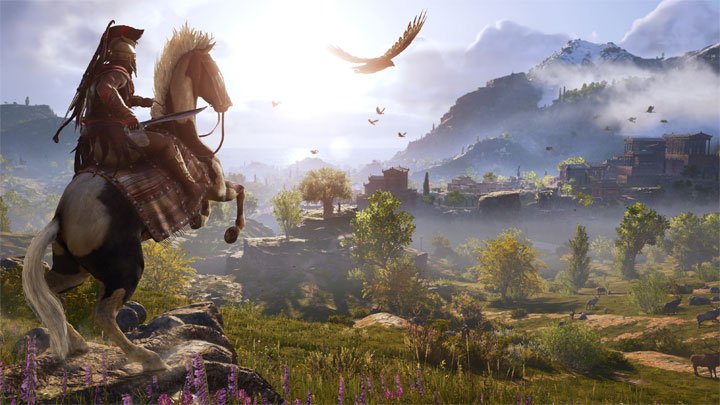 Ubisoft moving away from 'finite' narratives

Splat aliens however you can.

Ubisoft is drastically changing the way it structures its games, starting with Assassin's Creed Odyssey, marking a shift away from one massive self-contained story mode and towards more overlapping stories.

Don't worry - this isn't the old talk about "games as service", but a different way of approaching single player gaming. The publisher's vice president of creative, Lionel Raynaud, explains it all in a new post on the official Ubisoft blog, in which he talks about the need to get away from single game-winning objectives as openworld titles become more immersive and players want to spend more time in them.

"What drove this is the will to not give finite experiences," says Raynaud. "The idea was that you have this conflict, and the resolution, and then it's finished – you've killed the bad guy, for instance. We build a strong nemesis, and the goal of the game is to kill him or free the country, we've done that a few times in our games. But when you succeed, you have to leave the game, because there is nothing else to do. So the goal was to break this, and say that you will be the hero of a region or population many times, not just once. And if you get rid of a dictator or an oppressor, something else is going to happen in the world, and you will have a new goal."

Interestingly, it seems these new goals may not rely on the same gameplay mechanics. "This is why I talk about having several fantasies," Raynaud continues. "Not only being the hero who's going to free a region, but maybe also the fantasy of having an economic impact, of being the best at business in this freed country, or even having a say in how it should be governed, now that you've gotten rid of the dictator. And I think we can have several different experiences with different game systems in the same world, if the world is rich enough and the systems are robust enough."

What do you think? Are gamers ready for an Assassin's Creed game that becomes a political strategy game after you defeat the bad guy? Do we really want to take over the business empire of whichever despot we dethrone in Far Cry 6?

Wherever these musings lead Ubisoft, it's good to know that a publisher that has been criticized in the past for being so formulaic is looking to shake things up.