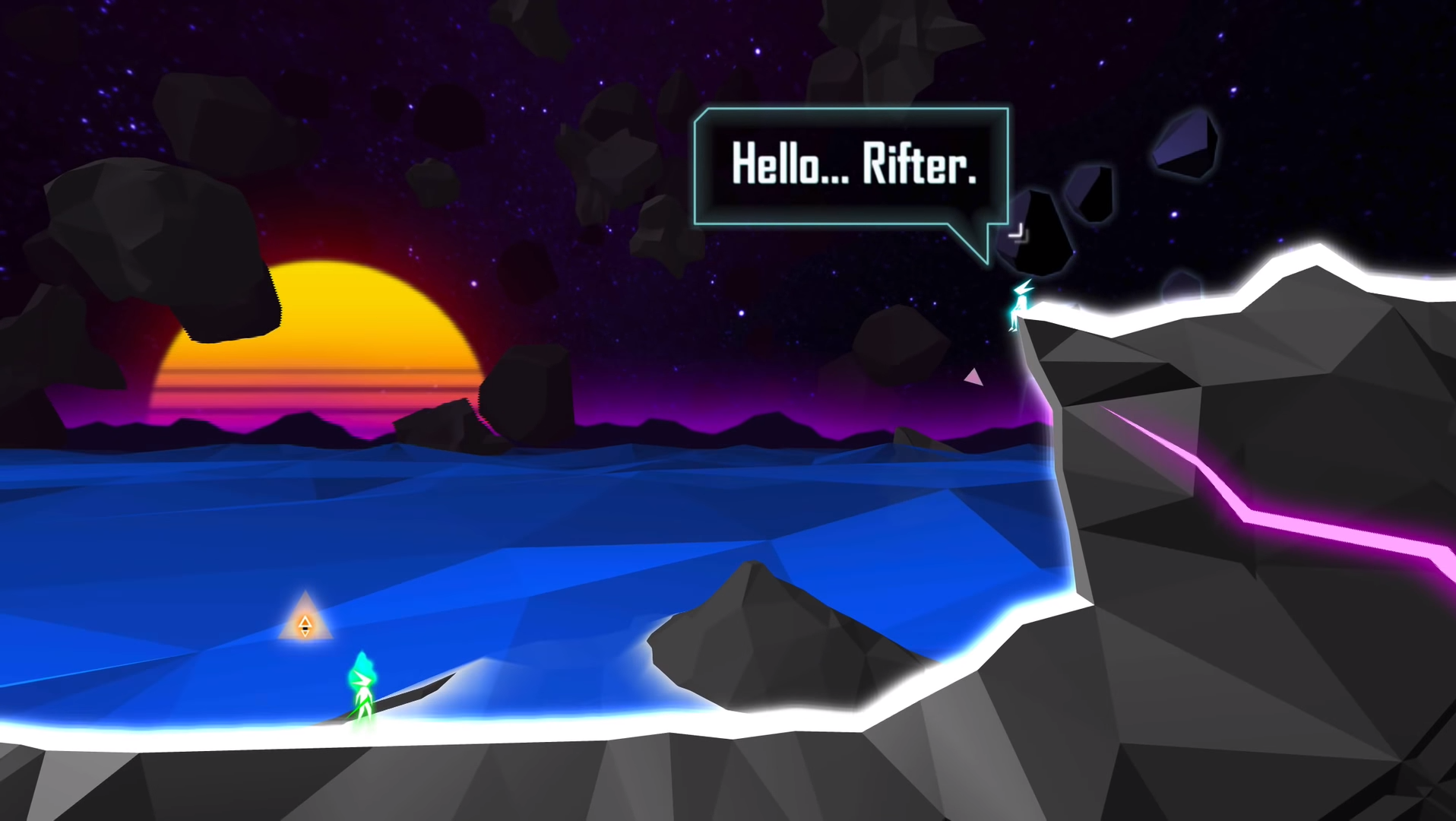 It doesn’t take long after getting your hands on Rifter to realise developer IMakeGames has produced something special. Combining grappling hooks with speed-fueled platforming is a guaranteed recipe for a good time, but it takes an experienced touch to achieve the level of satisfaction Rifter provides.

Rifter is all about speed and momentum. At the start your runner is capable of little more than jumping and swinging, but it turns out that’s more than enough of a hook to draw you in. Part racer, part 2D puzzler, you’re tasked with navigating neon maps comprised of chasms, aggressive drones, electric walls and fixed grapple points to swing from. It takes a moment to get used to the controls, but the second you nail that first set of swooping loops is immediately and intensely gratifying.

Reach the end of a level and you’ll be able to bash yourself repeatedly into a glowing rift, opening up a crack in the current world’s tower. Complete five stages and you can access to the tower itself, putting you to the test in an ultimate level that’ll see you sprinting away from an ever-encroaching wall of death or taking on an enormous boss with the skills you’ve established.

Individual levels shift between challenging technical puzzles, speed-heavy reaction runs and arena combat loops that have you tearing round the same small environment, wiping out foes. Most will have you diving in again and again after each death to find that perfect angle and timing required. If you’re a speedrunning newbie like us you can expect to die often, but thankfully Rifter is keen not to waste your time.

Played correctly, levels rarely take more than a few minutes to beat, and each death sends you swiftly back to the nearest checkpoint. Run out of lives and you won’t even be asked if you’d like to continue, you’ll simply be cannoned back to the start of the level — and you’d better believe you’ll be hungry for just one more run.

Each new mechanic introduced as you progress builds on your ability to maintain momentum. Dash gates offer a quick boost, while arrow trains latch your character to them, carrying you forward before flinging you into the air. Upgrades obtained by collecting orbs stashed in hard to reach areas provide new methods to build up pace and push yourself to new limits. Even attacks help you maintain speed, slicing through or bouncing off most enemies, and usually granting a boost to help you retain your combo.

If it’s not clear already from the images included here, Rifter is also stunningly gorgeous, and the entire affair is accompanied by a brilliant ‘80s-style electrowave soundtrack. In a lovely touch, you’re even able to pick and choose which songs you’d like to play from the game’s options menu. Rifter even offers a few different control schemes to try. We had a crack at mastering the unique twin-stick layout but found ourselves much more at home using a simple button press to precisely time each grapple and release. Still, it’s nice to have the option there (mouse and keyboard support is also available on PC).

As with any challenging platformer (and Rifters is challenging), you’ll occasionally reach a level that seems impossible, leaving you feeling like you’re running headfirst into a brick wall. The bonus puzzle levels are particularly fiendish, though the main game isn’t scared to throw in a devilish level from time to time either. While these can induce hair-pulling levels of frustration, we found that a short break before returning to the task was good enough to see us through in most cases.

Much like Super Meat Boy or Trials, Rifter won’t be for everyone, and we could easily imagine many players losing interest as the difficulty ramps up. Regardless, the core gameplay loop is one that anyone can appreciate, and with in-built leaderboards and ghosts to compete with, speedrunners and platforming connoisseurs won’t want to miss out on Rifter.